What inspired Fugro to develop RILA?
When Fugro was developing a system for measuring and analysing rail infrastructure, our priority was to design a way of performing track surveys safer, faster, cheaper and with a lower environmental impact than traditional ground survey methods. This led to the train-mounted RILA solution, a system that provides the accuracy and insights of competing solutions while allowing trains to run at regular speed and with no impact on the network capacity. 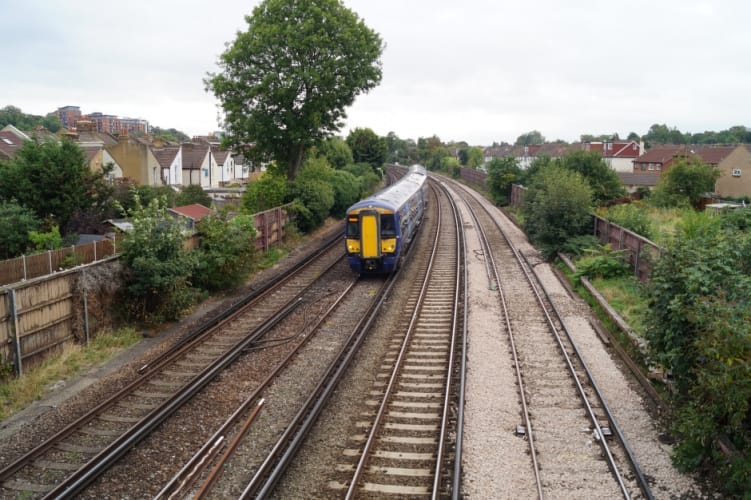 Can you tell us more about the technology involved – what is it and what exactly does it do?
The system uses integrated laser and imaging systems to measure absolute track position and geometry to engineering specification accuracy while working at line speed (up to 125mph). Laser beams pass over each rail and a camera captures high resolution images of the rail head and rail foot. Tightly integrated onboard GNSS and inertial measurement systems compute the position and orientation of the track, while integrated video can be georeferenced for further analysis.

The latest generation of the RILA system also incorporates 360° laser scanner to supply high-density lidar point cloud data of the entire rail corridor, including track assets, structures and vegetation. One million points are recorded per second by the rotating scanners and can be combined with the track data to produce a highly accurate georeferenced or geopositioned point cloud.

All the technology is contained within a carbon fibre box that can be attached to the rear of an in-service passenger train in under two minutes. So far, the technology has surveyed over 20,000 km of high-accuracy track data in the UK. In 2019, Fugro and Network Rail collaborated alongside Transport for Wales (TfW) to deliver a major survey of Wales’ rail network. The project used RILA technology to provide up-to-date gauging and track-positioning data, which then supported validation of track positioning and a new train introduction programme in Wales.

What are some of the key benefits of RILA, and what does this mean for future of the rail industry?
Big data will play a vital role in optimising existing rail infrastructure for a more sustainable and efficient future.

Competitors may have technology that similarly scans rail infrastructure, but this involves the use of a dedicated train or an otherwise potentially disruptive method. RILA has already been assessed by Network Rail to provide data to Band 1A accuracy and is approved for upper, lower, 6ft passing and platform gauging, as well as overhead line heights and staggers.

As the technology works at line speed on operational rolling stock, the collection of survey data is rapid and cost-effective. This also means that surveyors are not required to be on or near the line when collecting survey data.

Ultimately, because RILA can operate on in-service passenger trains, more data can be collected in a shorter period. For example, we were able to collect data to gauge clear the entire Wales Route in less than six weeks, which is shorter than the time it would take just to arrange the train paths for a dedicated survey train; collecting the data using traditional land surveying techniques would take several years. This ability to quickly acquire contemporary data over entire networks is a significant benefit.

Moreover, data from a single RILA collection can be used for myriad purposes by multiple asset owners and engineers. For example, the RILA data can be used by maintenance teams to plan track access, gauging engineers to assess clearance, and renewals engineers to design new track alignment. By replacing inefficient and less accurate one-off surveys with a continuously updated accurate track survey, asset managers can always access the most recent data to stay well informed.

What’s next for Fugro and RILA?
With the ongoing pandemic continuing to squeeze resources, Fugro wants to provide rail asset managers with one overarching information platform for their engineering and maintenance programmes. RILA forms part of our RailData solution, which provides continuously updated track, vegetation and rail asset data, presented in a highly accurate digital twin of the infrastructure and accessible anywhere through a web-based portal.

Close collaboration with network operators and industry partners is an important part of Fugro’s development process and it has recently won funding under Innovate UK’s ‘First of a Kind’ (FOAK2020) competition for its InnoTamp project in collaboration with Network Rail. A world-first for track maintenance, the funded project will demonstrate how track alignments generated using Geo-data from Fugro’s RILA system can be directly uploaded to a tamper’s computer to optimise tamping of railway lines.