High-resolution imagery from the satellite Worldview 3 was processed using an algorithm developed by Dr Olga Isupova, a computer scientist at Bath University. Published in the Journal of Zoology, the project was a collaboration with Oxford University and the University of Twente in the Netherlands, and part of conservation efforts to more accurately gauge African elephant populations in the wake of declining numbers. There are estimated to be just 40,000-50,0000 of the species remaining in the wild, largely due to poaching and loss of habitat over the past century.

How drones and AI are protecting endangered wildlife

According to Dr Isupova, the new technique allows vast areas of land to be scanned in a matter of minutes, offering a much-needed alternative to human observers counting individual animals from low-flying aircraft. As it sweeps across the land, a satellite can collect over 5,000 km² of imagery every few minutes, eliminating the risk of double counting. If there is extensive cloud coverage, the process can simply be repeated the following day using imagery from the satellite’s next orbit of Earth. 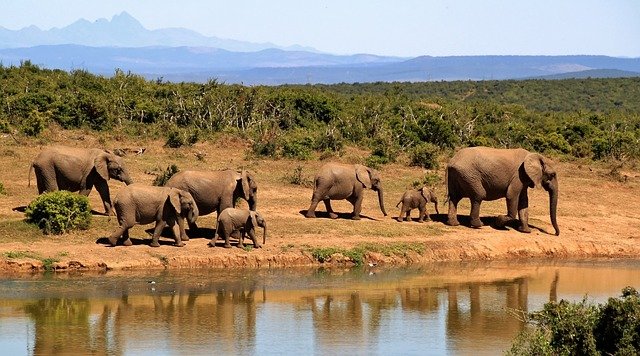 While satellites have previously been used to count animal populations, this is the first time the technique has been applied in a heterogeneous landscape, whereby individuals must be identified against a variety of backdrops – in this case, open grassland, woodland and partial coverage.

“This type of work has been done before with whales, but of course the ocean is all blue, so counting is a lot less challenging,” said Dr Isupova. “As you can imagine, a heterogeneous landscape makes it much hard to identify animals.”

African elephants were selected by the researchers not only because they are endangered, but also due to them being the largest land animals on Earth, and hence easier to spot from space. However, the team believes advances in technology and refinement of deep learning algorithms will make it possible to detect much smaller species using satellites, even in heterogeneous environments.

“Satellite imagery resolution increases every couple of years, and with every increase we will be able to see smaller things in greater detail,” said Dr Isupova. “Other researchers have managed to detect black albatross nests against snow. No doubt the contrast of black and white made it easier, but that doesn’t change the fact that an albatross nest is one-eleventh the size of an elephant.”