Several major aerospace players are coming together to study the in-flight emissions of sustainable aviation fuel, with a view to decarbonising long-haul air travel.

The ‘Emission and Climate Impact of Alternative Fuels’ project sees Airbus, Rolls-Royce, German research centre DLR and sustainable aviation fuel (SAF) manufacturer Neste investigating the use of 100 per cent blends of the kerosene alternative. Both ground and air tests will be conducted using an Airbus A350-900 aircraft powered by Rolls-Royce Trent XWB engines.

Supplied by Finnish oil-refining company Neste, the SAF being used is made from hydroprocessed esters and fatty acids (HEFA). Last week saw fuel-clearance engine tests get underway, including a first flight from Airbus’s Toulouse facilities to check the fuel’s operational compatibility with the aircraft’s systems.

“SAF is an important part of Airbus’ ambition to decarbonise the aviation industry, ensuring a sustainable future for air travel,” said Steven Le Moing, New Energy programme manager at Airbus. “It is a ready-to-use solution for current fleets and remains the most viable, long-term solution for long-haul flights where other technologies, such as hybrid-electric and hydrogen, are further from maturity. 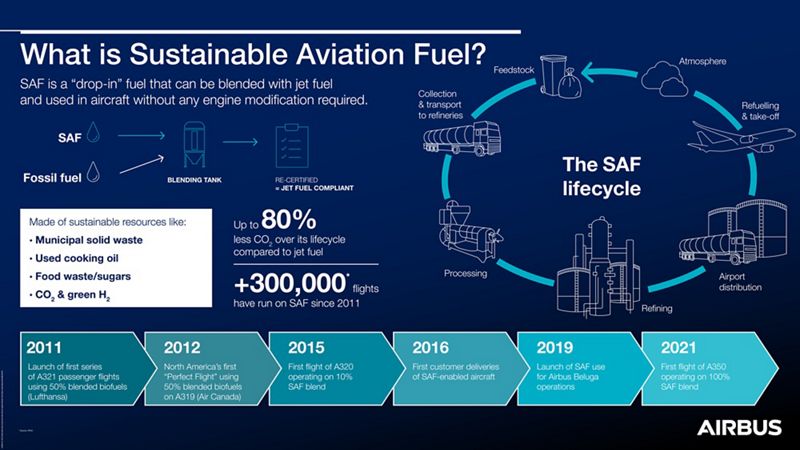 “SAF is currently only permitted at up to a 50 per cent volume blend with fossil kerosene but this exciting collaboration between industry, academia and government will provide us with a unique insight into how gas-turbine engines function using 100 per cent SAF. The identification of the potential for emissions reductions, and the environmental impact of using such fuels in flight, will further lay the groundwork for its future certification.”

In-flight testing will begin in April using DLR’s Falcon 20-E ‘chase plane’ to carry out measurements on the impact of SAF emissions. Meanwhile, further ground tests measuring particulate-matter emissions will help explore the environmental impact of SAF-use on airport operations. Additional measurement and analysis for the characterisation of the particulate-matter emissions during the ground testing will be delivered by Manchester University and the National Research Council of Canada.

“By investigating 100 per cent SAF, we are taking our research on fuel design and aviation climate impact to a new level,” said Dr Patrick Le Clercq, project manager at DLR.

“In previous research campaigns, we were already able to demonstrate the soot-reduction potential of between 30 and 50 per cent blends of alternative fuels, and we hope this new campaign will show that this potential is now even greater.”

Opinion: How investors can get the measure of green projects