Our predecessors were far from impressed by the development of a gun designed to fire projectiles filled with dynamite or nitro-glycerine.

In the summer of 1884 The Engineer got wind of a new kind of gun being developed and tested in the USA and wasn’t particularly impressed with what it had learned.

The weapon in question was a new dynamite gun, described by The Engineer as a ‘monster air gun for discharging projectiles charged with dynamite’ that was attracting considerable attention in America.

The Engineer, borrowing the gun’s technical details from Scientific American, described how it was undergoing US government trials under the supervision of a certain Lieutenant EL Zalinski.

In the days when The Engineer didn’t pull its punches, our correspondent noted, ‘The object of the gun is to enable what are termed ‘high explosives’ to be employed in projectiles – that is to say, dynamite and other forms of nitro-glycerine.

‘As many of our readers know, no projectile charged with any compound of nitro-glycerine would be allowed to be fired from our guns in this country…The shock of discharge in an ordinary gun is so liable to fire nitro-glycerine, and thus burst the gun, that even experimentally its use has been forbidden.’

The great hoots of derision that poured from the pages of The Engineer in 1884 continued when contemplating the gun’s practical uses, claiming it was of limited scope and power.

The Engineer continued, ‘It is rather to be compared to a rocket machine than gun. We are not in a position to compare results until we get more data. We suspect that the ‘fair degree of accuracy’ spoken of is a low standard. The projectile has the advantage of accuracy over a rocket in having all the force impressed in the desired direction, whereas a rocket is continually generating force in whatever direction it may be pointed at that the moment.

‘Nevertheless, the forward position of the centre of gravity is a feeble means of retaining direction, and we should suspect the dart to go badly or turn up in the wind.

‘The gun is an enormous complicated affair compared with a rocket tube, and it required steam power, while the rocket tube can be easily carried on a mule’s back.’

This damning assessment of the dynamite gun, the demonstration of which was led by a Mr H.D. Windsor of New York, didn’t get any better with The Engineer going onto quote Sir William Congreve, who called rockets the soul of artillery without the body.

‘This large steam apparatus and low power of flight almost suggest the idea of the body of artillery without the soul,’ The Engineer concluded.

Scepticism in London wasn’t matched by Zalinski, who went onto modify the design of the dynamite gun to such an extent that the US Navy commissioned USS Vesuvius (pictured below), a dynamite gun cruiser fitted with three 15” guns claimed to be capable of firing a shell 1.5 miles.

The dynamite gun was then fitted to the submarine USS Holland in 1897 but was removed three years later. 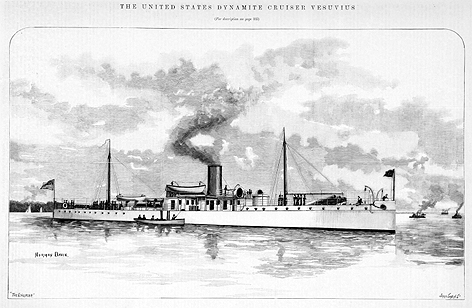 Putting innovation on the road

Robot goes searching in the sun for another overload