Figures released by the Society of Motor Manufacturers and Traders (SMMT) show UK car production fell by four per cent in October compared to last year.

According to the SMMT, 134,752 units rolled off production lines in October 2019, which was 5,622 fewer models than October 2018. That four per cent decline feeds into a year-to-date drop of 14.4 per cent, with automotive production declining in 16 of the last 17 months.

“Yet another month of falling car production makes these extremely worrying times for the sector,” said Mike Hawes, SMMT chief executive. “Our global competitiveness is under threat, and to safeguard it we need to work closely with the next government to ensure frictionless trade, free of tariffs, with regulatory alignment and continued access to talent in the future.

“This sector is export led, already shipping cars to more than 160 countries, and in a period of unprecedented change a close trading relationship with the EU and preferential trading with all these other markets will be essential to keep automotive in Britain.” 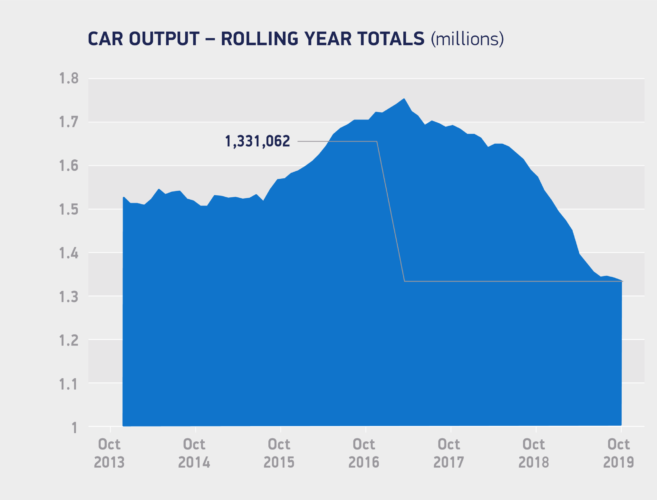 October 2019 saw production for the home market drop 10.7 per cent, while exports were down 2.6 per cent. Across the whole year to date, domestic demand is down 10.4 per cent, with overseas orders declining by 15.2 per cent.

Alongside Brexit uncertainty, model changeovers have also played a part in the downturn, according to the SMMT. But there are indicators that the global stagnation that has compounded the UK’s domestic woes may be shifting, which could help provide the sector with a much-needed shot in the arm.

“There are tentative signs that global growth – a huge factor in the health of UK car-making – may be getting back on track after some softness this year,” said Stuart Apperley, director and head of UK automotive at Lloyds Bank Commercial Banking. “Germany’s latest GDP data at least showed modest growth and there is the prospect of the US and China agreeing to end their trade stand-off.

“Many in the industry have been vocal about how the ongoing uncertainty is affecting the sector. Some manufacturers have cut production and either cancelled or delayed investment. Unfortunately, this has been perhaps the key theme of 2019.”