eConowind’s Ventifoil wind-assist technology has been deployed commercially for the first time, with two 10-metre units attached to the Dutch vessel MV Ankie. 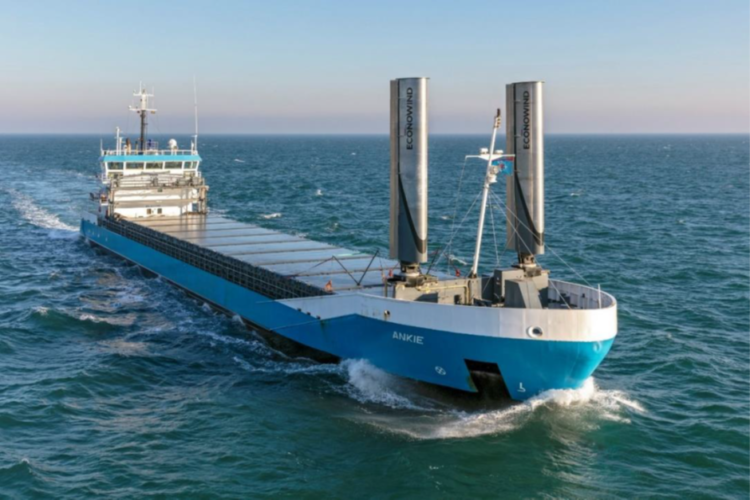 The Ventifoils resemble aircraft wings with vents and also feature an internal fan. This combination helps create boundary layer suction that delivers a propelling force, enabling vessels to reduce fuel use. Ventifoils are just one of a number of wind-assist concepts emerging as shipping seeks to reduce carbon emissions, with The Engineer exploring the technology in-depth in its February cover feature.

The 3,600 DWT general cargo vessel MV Ankie recently made its first voyage with its new Ventifoils attached, sailing from Delfzijl in the Netherlands to Hamburg, onwards to Norway and then back to Rotterdam. The journey was carried out by Jan van Dam Shipping on behalf of maritime logistics conglomerate Wagenborg.

“We take an active part in the shipping industry’s de-carbonising energy transition,” Wagenborg said in a statement.

“Together with our stakeholders, such as our affiliated captain owners, clients, investors, employees and suppliers, we accept sustainability challenges to reduce our environmental footprint. We are happy Jan van Dam, who has been sailing for Wagenborg over 26 years now, picked up the glove resulting in this Ventifoil project.”

For eConowind, based out of Groningen, it marks the first commercial installation of its Ventifoil system. The wind-assist technology was developed over the past three years as part of WASP (Wind Assisted Ship Propulsion), a project funded by the Interreg North Sea Europe programme under the European Regional Development Fund (ERDF). WASP has brought together universities and wind-assist technology providers with ship owners to research, trial and validate the operational performance of a selection of wind propulsion solutions.

For Jan van Dam, this first voyage with the Ventifoil technology was an important milestone, as the shipowner has been hoping to combine modern maritime technology with wind power for nearly 40 years. The 10m units on his MV Ankie are set to be extended by an additional six metres at a later stage.

“We expect to show in the WASP-research project this first step will be economically feasible,” said van Dam. “We are hoping to set the next steps as well in a new-to-build ship in the coming years, getting step-by-step into low and even zero-emission shipping.”