The advent of nuclear propulsion required a new class of floating dry dock and in April 1960 The Engineer's naval correspondent visited Plymouth to report on the launch of a key new facility for the Royal Navy. Written by Jason Ford. 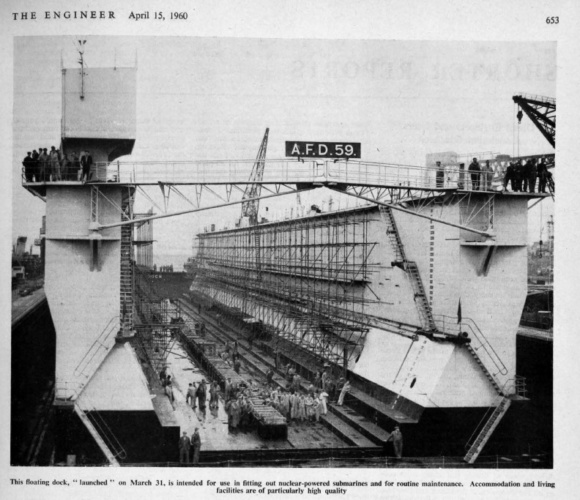 Dry docks can be traced back to the Greco-Roman world when Phoenicians were observed to have dug a trench and filled it with props and beams to accommodate a vessel.

The trench was flooded, the vessel guided to its temporary moorings and the water then pumped out. Et voila, the dry dock was born.

But what about those occasions when a boat needs repairs and a dry dock is not available? The solution is to take the dry dock to the vessel in the form of a floating dry dock, as witnessed in 1869 when such a vessel was constructed in England and towed to Bermuda.

Floating dock Bermuda was the first Admiralty Floating Dock (AFD) and in April 1960 The Engineer’s naval correspondent reported on the 59th such vessel, which was capable of lifting all existing destroyers and frigates but was specifically designed with nuclear-powered submarines in mind.

CLICK HERE FOR THE ENGINEER'S ORIGINAL ARTICLE FROM APRIL 1960

“Admiralty Floating Dock No. 59 is a clear indication that Britain is no longer to be content with one, or even two nuclear-powered submarines and that in due course, when finances permit, we may expect a flotilla of ‘Dreadnoughts’”, The Engineer said. “It might also be more economical to use her for the refits of destroyers, frigates and submarines in ports where there are no naval barracks available.”

“Until we have more knowledge of the risks entailed in installing nuclear reactors and changing fuel elements, it is essential that a vessel, while they are being installed, should be in a safe place, far removed from the wharf or jetty in a populated shipbuilding yard,” our naval correspondent noted.

Working away from shore required AFD 59 to be built with ‘quarters for the ship’s company of the vessel in hand, in addition to the normal accommodation required for the dock’s crew’.

“It will thus not only be fully equipped to carry out routine maintenance and repairs of ships docked in it but will be provided with accommodation and living facilities to the latest habitability standards, including air conditioning and fluorescent lighting in all cabin’s messes, for about 200 hundred officers and men,” The Engineer said.

At 400ft long, 77ft wide and 65ft high, AFD 59 appeared capable of docking larger submarines than the Dreadnought, which was based on the USS Skipjack, a vessel of 2850 tons, 250ft in length and 31ft 6in beam, and with a ship’s company of eight officers and 75 men.

Until we have more knowledge of the risks entailed in installing nuclear reactors and changing fuel elements, it is essential that a vessel, while they are being installed, should be in a safe place, far removed from the wharf or jetty in a populated shipbuilding yard

“But it is not clear whether, in stating that “the dock is capable of lifting submarines of the latest types,” the Admiralty include the United States rocket launching submarine, George Washington a vessel of about 5600 tons and 380ft in length,” our naval correspondent said.

Extensive use was made of prefabrication, and the completion of the structure within 15 months represented a considerable achievement, more particularly as the work was carried out in a dry dock in Portsmouth which lacked many of the facilities normally associated with a building slip, The Engineer observed.

“Assistance in fabrication of certain fittings was given by Chatham and Rosyth dockyards,” our naval correspondent said. “A push-button control system will be installed for the operation of the dock and the main pumps for controlling the raising and lowering of the dock will be capable of dealing with over 200 tons of water per minute.”

The correspondent added: “Instruments will be fitted, to record for the Dock Master’s information, the strains coming on the structure during the docking operation. Four main generators and two auxiliary generators supply 1320kW for the main pumping machinery, lighting, etc. This power supply is sufficient for the domestic load of a vessel in the dock and power and lighting for repairs in addition to the dock services.”

Our naval correspondent finished by observing the installation special sliding keel blocks for the docking of submarines, plus a 7.5-ton travelling crane situated on, and running the full length of, each dock wall.

AFD 59 was followed by – you’ve guessed it - AFD 60, which had a 6000-ton capacity for nuclear submarines. This floating giant was moved to Hafnarfjördur, Iceland in 1997 and is still said to be in operation.