The London Electrical Cab made its debut more than 120 years ago. The Engineer was there to cover it. 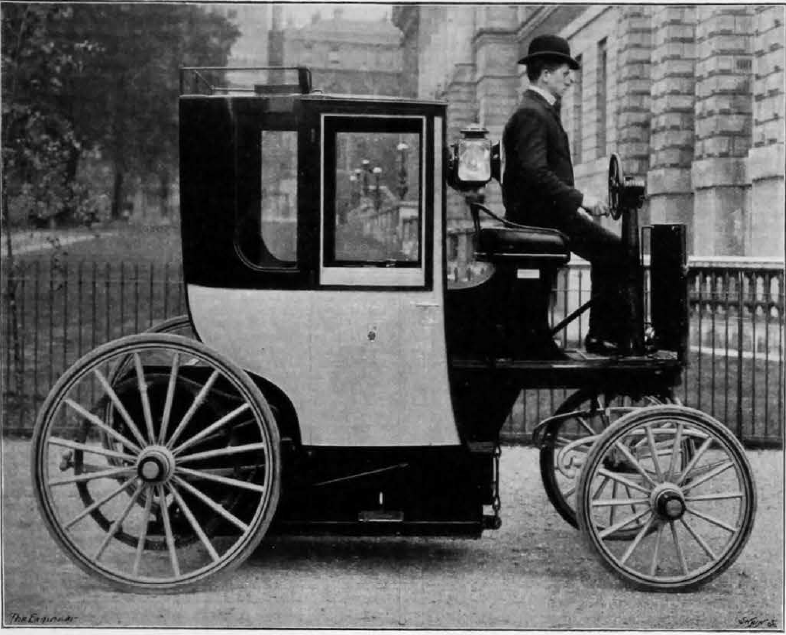 In August 2017, London’s first hybrid black cabs hit the streets ahead of new legislation that came into effect this year, requiring all new cabs to be ‘zero emissions capable’. The TX can operate for around 70 miles on battery power alone, with a petrol range extender allowing it to clock up around 400 miles before refuelling. But London’s very first electric cabs actually came into service exactly 120 years earlier.

“Mr W H Preece inaugurated a service of electrical cabs which are to ply for hire in the streets of London in competition with the ordinary hackney carriages,” wrote The Engineer in August 1897. “Thirteen of these cabs are now ready for work, and a staff of drivers have been instructed in the use of them. The cabs will be let out by the proprietors, the London Electrical Cab Company, Limited, just at the same rate and in the same manner as the London cabs. The ‘cabbies’ are, we are informed, quite enthusiastic about the new vehicle.”

The London Electrical Cab – also commonly known as the ‘Hummingbird’ due to its sound, or the ‘Bersey Taxi’ after its young designer – first took to the streets of the capital on August 19 1897. Inventor Walter Charles Bersey was just 23 at the time, but had been designing and patenting electric vehicles for several years already. According to our predecessors, his creation was intended to mimic the appearance of the horse-drawn taxis of the day.

“The vehicle resembles very closely a horseless and shaftless coupé. It is carried on four wooden solid rubber-tired wheels. There is ample space for the coachmen. The accommodation within is luxurious. The propelling machinery consists of a 8-horse power Johnson-Lundell motor, with double wound armature and fields, so that by the use of a suitable switch or controller a variety of speeds can be obtained.”

“The current is supplied by 40 EPS traction type cells, having a capacity of 170 ampere hours when discharged at a rate of 30 amperes. The cabs can thus travel between thirty and thirty-five miles per charge.”

The vehicle had speed settings of three, seven and nine miles per hour, controlled by a lever at the side of the driver’s box. A powerful footbrake that broke the electrical circuit could also be applied, halting the vehicle in short order. This was one of four key conditions under which taxis were granted licenses by Scotland Yard, with carriages also required to be capable of turning in small spaces and climbing central London’s steepest ascent of the time, Savoy Hill.

The batteries, which weighed some 14 cwt (over 700 kg), were hung from springs underneath the vehicle and could be swapped out at Bersey’s Lambeth station using a system of hydraulic lifts. This was undoubtedly restrictive, and it was planned at the time to introduce other stations throughout London where the batteries could be charged and swapped. Though Bersey’s company claimed cab drivers welcomed the vehicle, it appears its introduction was not received as warmly from all quarters, as the following passage from a September 1897 edition of The Engineer illustrates.

“Mr. Walter C Bersey, the general manager of the London Electrical Cab Company, Ltd., has written to the general secretary of the London Cab Trade Council, saying that he fails to see how it can be contended that the introduction of electrical cabs can be against the interests of the cabdrivers. He says he has spoken to hundreds of cabmen on the subject, and has always understood they were most anxious for the change, as it would shorten their hours by saving the time wasted in changing horses, and also save them the unpleasantness of frequently having to drive tired and undesirable horses.”

Despite Bersey’s protestations, the vehicle never really took off, with the fleet only reaching a peak of around 75 units. The cab's two-tonne weight caused huge wear on the tyres which led to noise and vibrations escalating significantly after six months of use. Bersey's company lost £6,200 in the first year of operation, and the business was forced to close in 1899, the vehicles disappearing from London’s streets just two years after making their debut.

MORE FROM THE ENGINEER'S ARCHIVE