During this month 62 years ago, The Engineer reported on the opening of Britain’s first stretch of motorway: the Preston by-pass.

Opened on 5 December 1958 by Harold Macmillan, prime minister at the time of its inauguration, the by-pass was described by The Engineer as ‘of special significance’ due to its status of being the first road in the British Isles for motor traffic only, designed to full motorway standards and eventually forming part of what would become the M6.

The road was of special interest as an achievement in civil engineering construction, with its design described as being ‘as modern in concept as the traffic aspect, set out to take the maximum advantage of mechanised constructional methods.’

The Engineer explained that the stretch of road was viewed as a ‘guinea pig’ to test various factors ahead of the opening of the London to Birmingham route, the first ‘major length’ of the British motorway which was completed the following Autumn. These factors included the use of motorway traffic signs, efficacy of the motorway code, drivers’ reactions and opinions, the necessity for speed limits and the presence of abnormal loads.

The below diagrams were included to show the route of the by-pass, and its various bridges, in relationship to the network of motor roads planned or under construction in Lancashire at the time. 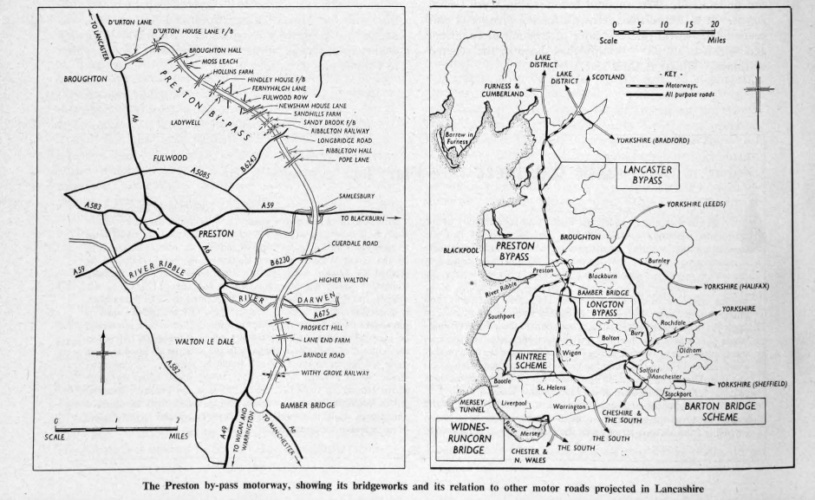 Describing the details of the road’s layout, The Engineer wrote:

“In general, the overall width of the by-pass is 112ft with dual carriageways 24ft wide. A contrasting marginal strip 1ft wide (the strip is of concrete, and the carriageway is ‘black top’) flanks each carriageway, so the effective width is 26ft. The outer verges are 14ft wide, including an 8ft width constructed to form a hard shoulder abutting on to the carriageway. The central reservation is 32ft wide, so ultimate widening from two-lane to three-lane carriageways will still leave a reservation 12ft wide.

“The three-lane road will be needed, it is considered, for carrying the estimated 46,000 vehicles daily. Continuous steel fenders are put outside the hard shoulders on all embankments higher than 20ft, on the straight, and 10ft on the right-hand curves.”

The Engineer went on to report that the features followed closely with the Ministry of Transport’s recommended standards with minor differences. Noted to be of particular interest were the advantages brought by those standards in comparison to the previous route, shown in the table below, with the comparison of access points and accident rates described as ‘especially striking’. 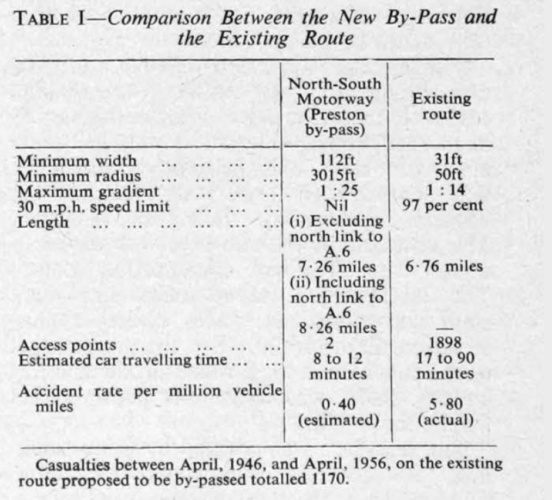 Earthworks were heavy for the construction of the by-pass, with excavation carried out to the extent of 2,250,000 cubic yards and the maximum depth of cutting 62ft. The Engineer reported that a fleet of heavy plant including tractors, scrapers, large capacity excavators and rear dump trucks were assembled to deal with the heavy earth-moving in June 1956, but the heavy rains of that autumn meant it was ‘virtually impossible’ to work the sandy clay sub-soil, so work was postponed until the following spring in 1957 - then once again, due to another rainy spell, until spring 1958. Problems that arose from the rains were described as ‘many and varied’, including the removal of an unsuspected peat bog in the Ribble Valley.

A total of twenty-two bridges were built over or under the motorway, with the cost of the bridge works ‘about a third of the total’. Total estimated costs for the main works, including land acquisition, alteration of services, design and resident staff was quoted at £3,147,000.