If any readers wanted a demonstration of just how long The Engineer has been running, and how much can change during that period, a long article from our archives shows both clearly. It discusses an issue that was of great concern to the defence of the British Empire, then at its height: whether the ships of the Royal Navy should be primarily made of wood or if they should be protected by a coat of iron.

Wood had, of course, been the only material for shipping construction for centuries. It had become part of British mythology – ‘Heart of Oak’ is still the official march of the Royal Navy – and the need for the emblematic tree to provide the timbers for ships changed the appearance of the English countryside. The nation had fought off the Spanish Armada with wooden ships; and had protected the country from Napoleon. Why change now?

The reason the question was even being posed was largely down to one man: Isambard Kingdom Brunel. It’s worth pointing out that although he’s now universally praised as a genius and an iconic figure of British engineering, that wasn’t true of his own time. Brunel was an iconoclast whose projects pushed at the very edges of the available technologies, and, as The Engineer’s obituary of him makes clear, to his contemporaries he was seen as a foolhardy figure more notable for his failures and the great cost of his completed projects than his successes. But the completion of his final project, the enormous iron sailing steam ship SS Great Eastern, had focused attention on the future of shipping.

SS Great Eastern was enormous. By far the biggest ship ever built, it was 692ft long (211m) and weighed 18,915 tonnes – records that would only be surpassed in 1899 and 1901, respectively. It could travel from England to Australia with 4,000 passengers without refuelling. But it wasn’t an unqualified success: an explosion on the maiden voyage had damaged the ship, and Brunel’s death soon after cast a pall over the project.

The Engineer article (which oddly, or perhaps not, does not mention Brunel at all) begins by mentioning General Sir Howard Douglas, a veteran of the Peninsular War, expert of military strategy and an authority on marine engineering. General Douglas, the article said, “has long been recognised as the principal literary champion of wooden ships of war”, and every time anyone had dared to suggest that iron should be used in their construction “he has uniformly exerted his influence, which is by no means inconsiderable, against the project”. Douglas had issued a pamphlet stating that: “Vessels constructed wholly, or nearly so, of iron were utterly unfit for all the purposes of war, whether armed or as transports for the conveyance of troops.” He even opposed the cladding of wooden ships in iron armour. 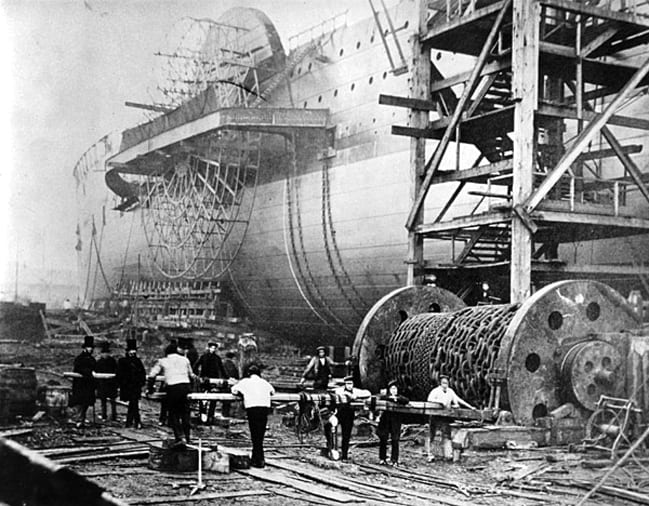 Stepping up to oppose the formidable General Douglas was Scott Russell, whose company had built the all-iron, double-skinned Great Eastern (and had gone bankrupt in doing so). Douglas was not impressed with the ship; in his pamphlet he had said that 68-pound solid shot “would pass straight through the Great Eastern with tremendous effect, and this perforation could not be plugged up”. Moreover, he claimed the ship was “an awful roller, and has never attained anything like the calculated speed”, and that a thickness or iron of eight inches would be needed to proof the hull against shells and solid shot. Russell took umbrage. On balance, he said, iron performed better than wood; iron ships would be stronger than wooden ships of equal weight; would be able to carry heavier weights; and would not catch fire. The Great Eastern, he insisted, rolled less than wooden ships, and had realised a speed of 14 knots on a transatlantic route.

The article points out that iron hulls could be repaired easily and fairly cheaply; shots striking at an angle tended to glance off, and they did not shatter into sharp splinters, which, in wooden ships, were a cause of terrible injuries to crew members.

The argument in favour of iron ships was a good one, the article concluded, with the matter of fire being particularly powerful; it notes that in a close engagement between wooden ships of the line, incendiaries could destroy both ships in less than five minutes. The developing expertise in metal shipbuilding would eliminate any drawbacks.

The argument had, in fact, been won two years before. HMS Victoria, launched in November 1859, was the Royal Navy’s last wooden ship of the line and the last wooden battleship to enter service, and the ironclads HMS Warrior and HMS Black Prince, launched in 1860, set the scene for the next iron-armoured wooden vessels.