No other car manufacturer is quite as adept at blending old and new as the Morgan Motor Company. The original Plus 4 was the mainstay of the company’s range for an incredible 70 years from 1950 to 2020. Its origins stretch back even further, with the steel ladder frame chassis and the coachbuilt aluminium body effectively an evolution of those on the 4/4 that was launched in 1936.

Now there’s a new Plus Four (the subtle change to the name reflecting what Morgan describes as the biggest advancement in the model’s history). Outwardly, it looks much the same as always. There’s the same classic roadster styling and the famous handmade ash frame supporting the sleek aluminium panels. But underneath it’s a car designed to take Morgan into the future.

“We recognised that we needed to ensure we had a strong future ahead of us in terms of emissions compliance, crashworthiness and the new GSR safety regulations,” explains Morgan’s head of design, Jon Wells. “That meant that we’d need a new vehicle platform, but a key requirement for us was to maintain the flexibility of coachbuilding with a separate body.”

With this in mind, Morgan decided to switch to a bonded aluminium monocoque design for the chassis, while retaining the traditional coachbuilding techniques for the body. It’s a tried and tested approach that the company has been using on its range-topping models since 2000.

Here, the majority of the structure is formed by folding sections out of sheet aluminium. The bonding surfaces are pre-treated with adhesive and then assembled on a jig before being baked at 180 deg C to create a single structure.

“It’s a really good solution,” notes Morgan’s chief engineer, John Beech. “We’ve been using this method for 20-odd years and we’ve never had a failure. It results in a very rigid structure – we use a small number of rivets for location purposes, but it’s the adhesive that does all the work.”

Morgan’s engineers refined this concept for the CX platform that would underpin the new Plus Four and Plus Six, Beech explains: “We managed to reduce the material thickness significantly – from 3 or 4mm down to 1.2mm in some places – which means the new chassis only weighs 97kg. At the same time, the stiffness has been doubled in comparison to the old Aero chassis.”

One thing that was set in stone from the outset was that the new Plus Four had to occupy the same footprint as its predecessor, Wells recalls. This presented numerous challenges. For a start, the Plus Four’s compact dimensions and low-slung running boards only left a narrow centre section for the main structure. And while the old Plus 4 used a live axle at the back and a sliding pillar arrangement on the front, the new car would use double wishbones all round.

Part of the design brief was that the car had to be capable of running wire wheels. This posed its own challenges, as wire wheels use spokes triangulated around a central hub, which leads to a larger offset than you’d find on an alloy wheel.

“With a wire wheel, all the running gear has to be packaged well inboard of the centreline of the wheel. Getting the suspension geometry to perform – achieving a manageable scrub radius, for example, becomes a lot harder in that scenario,” says Wells.

Morgan developed its own low-offset wire wheels in response to this, but it also necessitated extensive development work on the wishbones, uprights and brake components.

Morgan was keen to futureproof the Plus Four against incoming emissions requirements – both to safeguard its position in existing markets and to open new opportunities where the previous car was unable to meet the legislation. A deal was struck with BMW, which had supplied the V8s used in the Aero 8 and the later versions of the Plus 8, to supply a new generation of direct injection turbocharged engines – an inline four for the Plus Four and an inline six for its bigger brother.

The majority of the powertrain electrical architecture is also shared with BMW, as are the transmission options. Much of the calibration work has been carried out at BMW’s test facility in Aschheim, near Munich.

“The support and the hardware that we’ve received from BMW have been absolutely paramount to the programme. It’s a relationship that goes back over 20 years and the engineers we work with there are very much part of the team,” comments Wells.

Packaging these powertrains would bring their own challenges. The six-cylinder engine in the Plus Six is the longest ever fitted to a Morgan, while both come with complex control and aftertreatment systems. This meant that there was a constant temptation to open up the packaging volume, but Wells dug his heals in.

“Power bulge is a phrase that’s now banned from the Morgan Design Studio as it came up about once a day during the development,” he jokes. “And once you’ve got everything in there – with the radiator and the cooling pack pushed up against the engine, the next challenge is keeping it cool. That required a lot of complex under-bonnet aerodynamics work. We’ve used external CFD for many years, but this was the first time we’d carried out a major study on internal aerodynamics.”

Step into the Morgan factory on Pickersleigh Road and you’re still greeted by the sound of panel beaters’ hammers and the smell of fresh timber wafting through the air. In fact, there’s more wood used in the body frame of the CX generation Plus Four than in its predecessor.

Modern technology is used wherever it can offer an efficiency benefit without detracting from the traditional craftsmanship that lies at the heart of Morgan’s production philosophy. Laser cutting, for instance, is now used to create the blanks that will later be hand-shaped into the Plus Four’s elegantly-louvred bonnet. Likewise, 3D printing is used to create jigs and fixtures that are used in the wood shop.

One of the reasons for sticking with a traditional ash and aluminium coachbuilding process is that it provides plenty of flexibility for Morgan’s small production runs (typically around 800 cars a year). 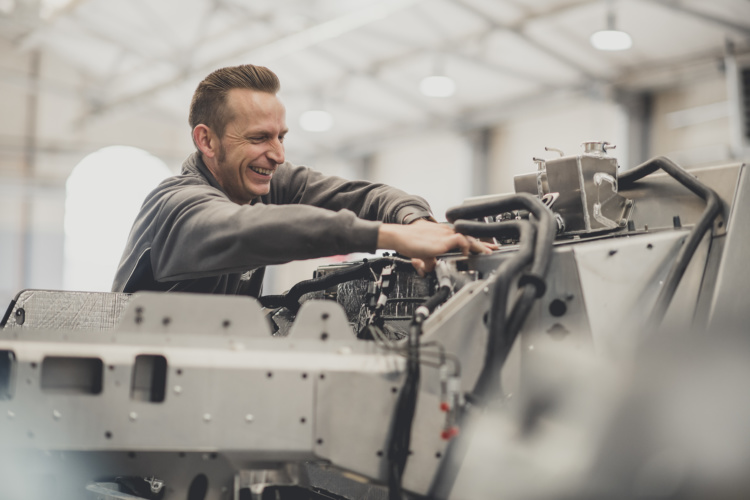 “We do everything for a reason – we really value the traditional skills that we have here, but as soon as we have a job justifying something then we don't force it,” comments Wells. “For instance, Morgan is known for using wood, aluminium and leather, but when we did our electric 3 Wheeler concept we used a lot of carbon fibre. It's about choosing the right materials and processes for the job, not being too precious about doing things a certain way.”

The wings are formed using the Superform process, which heats a sheet of aluminium to around 500 deg C and then blows it into a mould to create a complex 3D shape. But the remainder of the bodywork is sculpted by hand, just as it always has been.

The results are exquisite – particularly as other cars typically get bigger, heavier and more generic. Morgan has managed to retain the elegance of its original pre-war designs, despite bringing in a host of new technology.

There’s undoubtedly more to come. Although the company says it has no specific plans for electric or hybrid models on this platform, it has been designed to provide sufficient flexibility should that be required. The last few years have also seen a significant period of expansion, with a team of 35 engineers and designers now occupying a dedicated 30,000-square foot engineering centre. Whatever challenges the future may have in store, you can be sure that Morgan will be well-placed to tackle them in its own inimitable style.