Breaking the mould and shaping the future at Aston Martin

While many of the UK’s freshers enjoyed a summer off, William Savage and Gian Sebastian were at work – for Aston Martin. Not only are the two 18-year-olds among the very first cohort of grads from the WMG Academy for Young Engineers in Coventry, they are now two of the first Aston Martin employees to be signed up for the Applied Engineering Programme (AEP), delivered by WMG at the University of Warwick.

Apprenticeships are nothing new for Aston Martin. Will and Gian are two of 16 recruited this year and part of the total of 45 apprentices currently working for the luxury carmaker. It’s a coveted role - the apprentices are chosen from hundreds of applicants through a process of selection days, assessments, interviews and presentations. 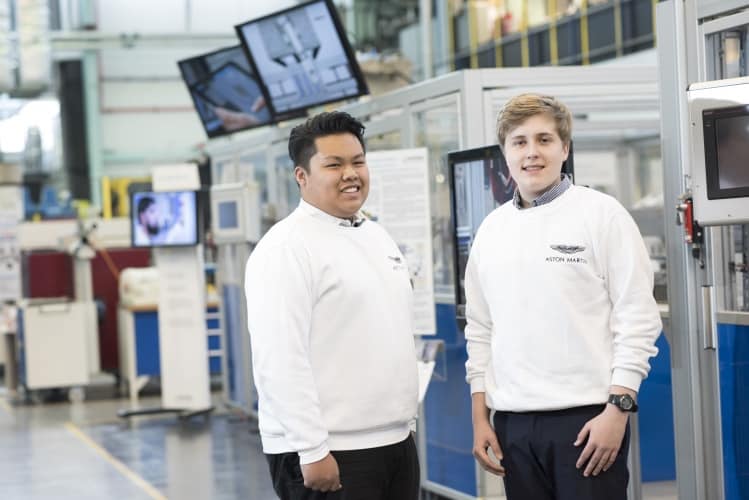 But sending employees back to university on the AEP is a new endeavour for the OEM. Just as they are settling into their new jobs, Will and Gian, along with two other Aston Martin employees, have also begun their studies to hopefully gain their BEng in four years’ time.

“This year, six of the students we recruited came from the WMG Academy, and two of them – Will and Gian – were selected for our CAD Body Engineering department where they are on a fully sponsored AEP through WMG at the University of Warwick<” said Karen Botting, senior manager for learning and development at Aston Martin.

“We’re delighted that our involvement in the Warwickshire Employability Charter and our relationship with the WMG Academy over the last year has proved to be successful for all parties.

“It’s refreshing to work with academic establishments that truly work to ensure their students are both highly skilled and employable. This is an ongoing relationship and we hope to increase the number of students from the WMG Academy joining us next year, as we grow our involvement and collaboration.”

The non-traditional route into higher education appealed to both Will and Gain for different reasons.

Will is a car fanatic who has run his own website since the age of 14. With two older siblings, both university graduates, he knew he wanted to get a degree and even applied to go to university through conventional methods. Ultimately, however, he ended up taking a different approach.

“I suppose I am the guinea pig of the family,” said Will. “My older brother and sister both took a more traditional path and I always ended up trying out new things. I went to a brand new school – the WMG Academy for Young Engineers – to study for my A Levels and this opened up loads more opportunities to see how engineering and business works.

“My brother and sister both they tell me how brilliant it is to go away to university. But I had the opportunity to do it differently and I weighed up university life versus the chance to work.

“As an apprentice at Aston Martin I’ll get to learn my trade through practical, hands-on experience as well as earning a wage. Then through the AEP at WMG I get to study the core theory of engineering and gain my BEng and as I advance and learn, I take back my new skills to the company. It’s a win-win situation.”

It was the nature of the course delivery that attracted Gian Sebastian to gaining his degree through the AEP.

A talented designer, Gian has always preferred the practical part of his studies. He did start his A Levels at his previous school but decided the applied element he really loved was missing. He moved to the WMG Academy in Coventry after a few weeks and began his BTech engineering qualification alongside A Level product design.

“I realised I wanted something more practical than just A Levels and the BTech in engineering offered me more hands-on experience,” Gian explained. “There was the opportunity to work with big name companies on real-life problems and the course was divided into units – some really practical, some business-led. It really worked for me, and the applied engineering programme is similar in that you get these modules of learning but you get to apply what you learn in the real world. ” 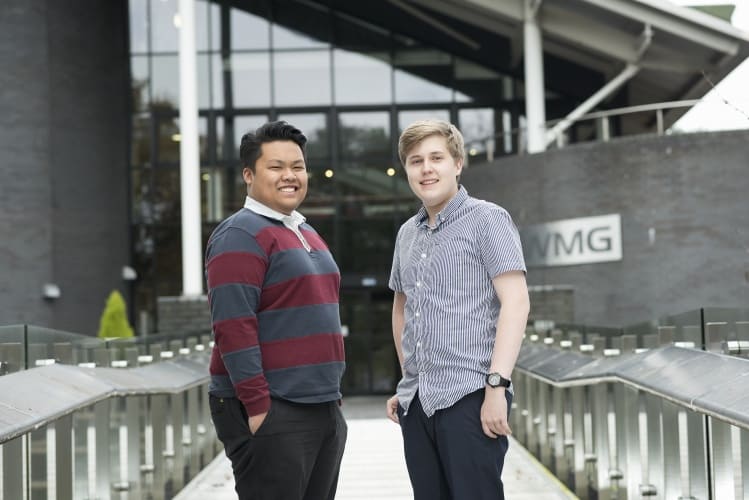 The AEP was developed by WMG to offer a non-traditional path into university and is delivered in blocks. For the first two years students take six core engineering modules per year, each delivered in week-long programmes at WMG’s modern facilities on the University of Warwick’s campus in Coventry. In years three and four, students select ten modules that are more specialised and individual to their learning needs. The programme is taught across four years and allows graduates at various stages of their careers to gain a BEng degree whilst working.

“The fact that they will be applying their learning in the workplace and that the assignments are real life work issues means that we gain benefit from the time they are away studying,” said Botting.

Crafting the engineers of the future

In their first few lectures Will and Gian have been sitting alongside a range of people of different ages and backgrounds and different stages in their career, but they are used to this. From the age of 16, the pair have had direct contact with business professionals from big name regional engineering and automotive businesses.

“The skill of engaging with grown-ups is just one of the attributes which sets the WMG Academy graduates apart as future recruits for many employees, including Aston Martin,” said Matt Brady, associate principal at the WMG Academy for Young Engineers in Coventry. “We make sure our young people are able to work independently, they are in control of their own work and report back on what they have achieved – just like in business.

“And with businesses integrally involved in the WMG Academy, not only do our students have experience of real life projects, but they are also aware of destinations – they graduate knowing about careers available to them and where they want to end up. This is an attractive quality for future employers.”

By no means are these more hands-on routes through education the soft option, according to Brady.

“We offer both GCE A level and BTech courses and it’s a common misconception in the outside world that the BTech is an easy option,” he said. “It’s not. At Level 3, the maths content of the course is significant and it should not be underestimated. These courses are developed with industry to deliver exactly what students will need to prepare them for the working world.”

For Gian and Will, working on the shop floor at one of Britain’s most iconic car brands makes the challenge worthwhile.

“I’ve been working in quality control and on the production line, testing ABS breaking systems on Aston Martin cars,” said Gian, “and since joining the company we have already presented to the CEO Andy Palmer twice. There’s nothing like this.”