The Spiral-Inducing Bypass Graft was produced by an unusual multi-disciplinary, cross-border venture. The laws that govern blood flow apply also to the dynamics of coolant in nuclear reactors, which prompted the development of this unique biomedical device

Nuclear physics and cardiology may not seem like natural bedfellows but the winner in the Health & Wellbeing category has cleverly combined the two. The Spiral-Inducing Bypass Graft is an artificial implant for the heart that induces a helical flow of blood, which improves the success of cardiovascular surgery and ultimately saves lives. It’s the result of a multi-faceted, international collaboration that spans the globe, led by Dr Amir Keshmiri. 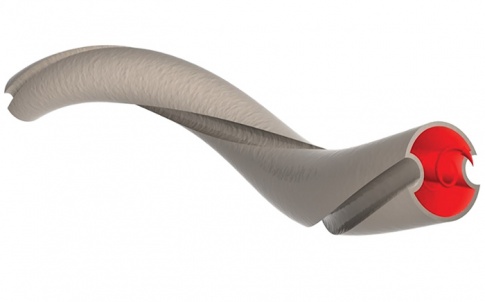 Almost 35,000 coronary artery bypass graft (CABG) procedures take place in the UK each year. However, according to the British Heart Foundation, more than half of CABGs fail within 10 years. Haemodynamic factors are widely acknowledged as playing a key role in the thickening of blood vessels that can cause graft failure. Finding a way to manipulate blood flow would have the potential to dramatically improve the procedure’s success rate.

“My PhD was in nuclear engineering but, towards the end of 2013, I started working on a number of biomedical projects,” said Keshmiri, assistant professor of fluid dynamics at Manchester University.

Fundamentally, the principles of fluid dynamics are the same across all mediums, with the laws governing the flow of blood also applying to the dynamics of coolant in nuclear reactors. Keshmiri had studied how helical ribs on the outer surface of nuclear fuel pins in the UK’s advanced gas-cooled reactors (AGRs) led to better mixing of coolant, resulting in the enhancement of heat transfer. After developing an interest in biomed, he began to look for applications of his expertise in CFD (computational fluid dynamics) simulation.

“I was intrigued by how we could potentially apply our simulation techniques to aneurysms and try to predict ruptures, for example,” he said.

In 2014, Keshmiri met Mark Slevin, a professor in cardiovascular biology at Manchester Metropolitan University. Their relationship would form the basis of this collaboration. Discussing bypass grafts, Keshmiri noted that all the implants he had encountered had been straight. He suggested that the helical shape used in reactors could have the potential to manipulate blood flow in heart implants. After discussing the idea with Slevin, Keshmiri took to the road, attending conferences and speaking to academics and surgeons.

“Some people were really interested; some people were a bit sceptical,” Keshmiri explained. “I got various feedback and I decided to include some of those people that I had met in the project, and that’s actually how it started.”

The EPSRC provided funding for the first stage of the project, which not only supported the UK-based research but enabled Keshmiri to visit international partners and collaborators that had joined the activity.

“When the project was funded, we brought in one or two more partners because we realised some more expertise was required to achieve the objectives,” he said.

These new partners included the University of Michigan, renowned for its strong biomedical engineering unit. Here, Keshmiri worked alongside Dr Foad Kabinejadian, an expert in cardiovascular biomechanics. Together they set about optimising the graft’s structure, conducting numerous simulations to achieve the best configuration.

In 2015, Keshmiri spent three months at the Cardiovascular Research Institute at Sant Pau Hospital, Barcelona. His experience in the clinical setting helped deepen his understanding of the surgical issues at play, and the institute became a prominent partner in the project.

“That placement was fantastic because I was immersed in that medical environment, dealing with biologists and surgeons every day,” said Keshmiri. “It was a real eye-opener.”

With collaborative partners in the US and Europe already on board, Keshmiri found himself looking to Asia for the final piece of the puzzle. His extensive research led him to a journal featuring the work of biomedical engineers from Singapore.

“One of the key publications when I was doing my research was written by a group at the National University of Singapore,” Keshmiri said. “I sent an email to the main author asking about some of their results. Then I asked for some data. They were very helpful, and that led to a very successful collaboration.”

The result of the multi-disciplinary, cross-border venture is a unique biomedical device that makes use of both non-planar helicity and an optimised internal ridge within the graft. The implant promotes improved blood flow within the anastomosis – the surgical connection between the prosthetic graft and the blood vessels of the human body.

Media reports have previously referred to the graft as ‘gun barrel’, because the helical shape has a similar effect to the rifling that imparts spin on bullets. However, the reality is not as straightforward.

“The gun-barrel analogy is so catchy – and it does make sense – but in reality it’s a lot more complicated than that,” said Keshmiri.  “[The graft] has a non-planar helicity, and a gun barrel doesn’t have that.”

With so many partners working across different time zones, project co-ordination was a major challenge. Communication between the teams generally took place over Skype, with Doodle Polls used to ascertain the most convenient times. For the workload itself, a Google Drive folder was used to share documents, and the team employed a software tool called Trello to assign tasks and give everyone visibility over the project and its progress.

“Whenever you have a number of people working on different aspects of a project, Trello is a nice platform that allows everyone to access and see what everyone else is up to,” Keshmiri said. “You can signpost messages, you can upload stuff, you can do so much with it and it’s fantastic for group projects.”

Patent applications for the design of the graft are currently in review, and the team is continuing to work on the device’s optimisation while seeking development partners.

“Before you go into clinical trials or even animal trials, you’re talking about huge amounts of money required for such projects. You’re talking about millions of pounds,” said Keshmiri. “We’re looking at potential industrial partners to see if any of them might be interested in helping or contributing, or developing the design. That’s the stage we’re at now.”

X-ray imaging is a powerful tool but it has not evolved much in the 120 years since it was discovered. And, while it is useful for distinguishing between materials with different attenuation properties – such as muscle and bone – it is less successful for imaging things such as tumours in soft tissue, where the contrast is weaker.

To solve this problem, a team led by Alessandro Olivo at University College London (UCL) has been incorporating x-ray phase contrast imaging (XPCI) into medical applications. XPCI exploits variations in the phase of x-rays as they pass through different materials or tissues, leading to greatly enhanced image contrast. The technique until recently has been restricted to specialised facilities such as synchotrons. However, working with research partner Nikon, the UCL team has been able to develop commercial prototypes.

Two projects funded by the Wellcome Trust and EPSRC are applying the technology in breast conservation surgery and oesophageal cancer intervention, at Queen Mary University London and University College London Hospital respectively. The multi-disciplinary collaboration has the potential to bring unprecedented detail to x-ray images, saving millions of pounds across the NHS and improving survival rates for countless patients.

In a UK first, the Virtual Engineering Centre (VEC) worked in close collaboration

to improve surgery planning. Using technology developed for the automotive sector, the VEC created a virtual heart of a child from MRI and CT scan data.

The VR heart can be projected into an 8ft model, highlighting details in the tiny organ, which in reality can be as small as a strawberry. Surgeons and doctors can explore the heart at will, walking through and around it to help plan surgical procedures and improve patient outcomes. The collaboration marked the first time Alder Hey had engaged with VR tools, as well as the first time the VEC had ventured into the healthcare space.

“We are amazed by the possibilities that working with the VEC has enabled,” said Iain Hennessey, head of innovations at Alder Hey. “Standing inside a virtual heart 8ft high, operating a virtual torch to examine for defects, has been one of the highlights of my innovation career so far. The ability to accurately assess the miniature detail of a sick child’s heart, using advanced 3D visuals, is a technology that we will continue to pursue in partnership with the VEC.”

StarStream is a portable ultrasonic device that uses cold water infused with bubbles to clean skin, tools and surfaces without chemicals. Developed by Southampton university and Cardiff-based Ultrawave, the technology is particularly effective against microbes and could be a vital tool in the fight against antimicrobial resistance (AMR), which has been building across society in recent years.

The device can be incorporated into sink taps or operate with bottles of drinking water as a portable battery-powered unit, for use by search-and-rescue teams or humanitarian missions. Thousands of ‘microscopic scrubbing bubbles’ clean by mechanical action, reaching cracks and crevices that other methods may fail to reach. As well as being suitable for cleaning medical instruments, the low pressure makes it safe for use on delicate materials such as salad leaves, or for cleaning sensitive wounds.

Having gained patents in the EU, Russia and China, StarStream is currently undergoing trials in three hospitals, where it will be used to clean everything from wards and equipment to the hands of medical staff. The collaboration has not only advanced the StarStream technology but has formed the basis for NAMRIP (Network for Antimicrobial Medicine and Industry), an entirely new research project with 160 members to date.

Collaborate To Innovate (C2I) is an annual campaign run by The Engineer, including an awards competition and conference, established to uncover and celebrate innovative examples of engineering collaboration