Our winner in the Healthcare &amp; Medical category is an advanced radiation device poised to undergo clinical trials for cancer detection.

In cancer surgery one of the main difficulties for surgeons lies in distinguishing between cancerous and healthy tissue. The risk is twofold: cancer cells can be missed so the patient requires further treatment, or healthy tissue is unnecessarily removed, which can lead to other health consequences and complications.

CHECK OUT ALL OUR C2I2019 COVERAGE HERE

Lightpoint Medical’s Sensei probe aims to address this problem by making it possible to identify cancer cells during laparoscopic (keyhole) surgery in real-time.

Lightpoint, in partnership with the National Physical Laboratory, is seeking to achieve this by using radiopharmaceuticals: radioactive drugs widely used in pre-operative diagnostic imaging of cancers.  “The innovation is in developing novel detectors that can detect these drugs intraoperatively, specifically for laparoscopic surgery, and give live feedback to the surgeon, so they can target the cancerous tissue while sparing healthy tissue,” explained Dr Kunal Vyas, Lightpoint Medical head of research. 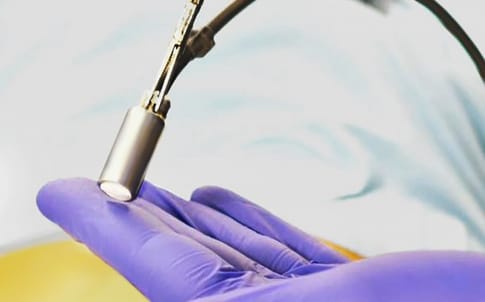 The device has almost completed its product development phase and Lightpoint’s team is preparing for clinical trials, which are expected to start early next year.

The principle on which the probe operates is this: the patient is injected with a cancer-targeted imaging drug commonly used in SPECT imaging (single-photon emission computed tomography).

The drug is selectively absorbed by cancerous cells, which then emit a radioactive signal that can be detected by the probe, in order to guide the surgeon as to what areas to target.  The probe emits an audio signal when it detects radioactivity and can be manipulated manually or robotically.

There are a number of areas of innovation, said Dr Vyas. “The biggest engineering demand is miniaturisation,” he said: the probe must fit through a 12mm trocar (the keyhole or portal to the abdomen used in laparoscopic surgery).

The second innovation is the tethered format. The probe is a small instrument on a flexible cable. A nodule behind the probe head allows it to be grasped by a manual or robotic surgical grasping tool operated by the surgeon from outside the patient’s body. “This allows them to articulate our probe through the full six degrees of freedom,” Dr Vyas said.

A third area of innovation is exploiting the use of radiopharmaceuticals as diagnostic agents and applying this to surgery and this is where NPL’s expertise in radioactivity and handling radioactive materials came in.

NPL  - which played a crucial role in demonstrating that the probe would work in the radiation environment in a patient’s body - was able to supply radioactive isotopes at the required concentrations, and had established procedures and facilities for using and handling the materials safely, as well as the expertise in measuring radiation very precisely.

The organisations mapped out the critical abdominal organs and structures – and created a physiological “phantom” or physical representation of the abdomen.

A crucial aspect element was the pelvis. Because bone scatters and absorbs radiation, NPL devised a bone-mimicking material with the same density, scattering and absorption properties, and created a model of the pelvis using additive manufacturing. 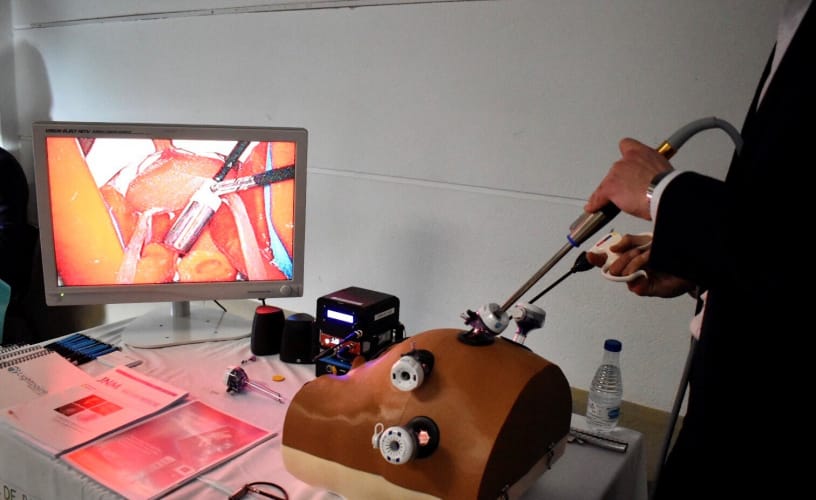 The phantom also had representations of the organs which would have significant radioactivity in them – the prostate itself, the liver and the bladder – to which capsules containing a precise amount of radioactivity, based on the medical literature, could be added in a safe way.

Several surgical specialists used the model to evaluate different grip designs and to demonstrate that they could successfully manipulate the probe and detect the radioactive capsules.

In this procedure, lymph nodes nearest to the tumour are removed so they can be tested by a pathologist to give an indication of whether the cancer has spread or not.

Approval for this could be gained quite quickly and is expected later in 2020. Dr Vyas explained that although the device is novel, sentinel lymph node biopsy uses a standard drug and is a well-established procedure.

A second trial will use a more advanced drug, aprostate specific membrane antigen, which specifically targets prostate cancer and will allow lymph nodes to which cancer has actually spread to be identified. “That will be the first time that radio-guided surgery will have been used for that purpose,” said Dr Vyas.

‘’From the point of view of improving outcomes for the patient, the first trial will be significant because current practice is to remove all pelvic lymph nodes,’’ said Dr Vyas. “This leads to severe side-effects, such as a high risk of infection.” And unnecessarily removing healthy tissue carries the additional risk of accidental damage to critical nerves in the area.

“It’s about removing as little healthy tissue as possible. If you can be more precise and more targeted you can achieve the same clinical benefits without the downsides,” he added.

The Healthcare & Medical category is sponsored by Solidworks

Probe can distinguish cancer cells from healthy brain in surgery