Melissa Bradshaw caught up with Stephen Lambert, head of electrification at McLaren Applied, on engineering a low-carbon future in automotive and beyond

Accelerated by the cocktail of the Covid-19 induced ‘new normal’ and the pressure of looming global climate concerns, digital transformation and electrification are having their moment.

Development of new, efficient, greener technologies goes hand-in-hand with achieving our Net Zero ambitions. The engineering sector is playing an enormous role here, and companies like McLaren Applied are more determined than ever before to step up to the challenge.

The company was established back in 2004 as a spin-out of Woking-based racing and automotive giant McLaren. Since then, it has brought a range of innovations to the forefront of industries spanning beyond automotive and motorsport, branching into areas such as manufacturing, public transport and aerospace.

Through applying its leading expertise in motorsport to solutions within these industries, McLaren Applied aims to fulfil its mission of pioneering a better future through its people and technologies: something the electrification division has been particularly key in as we head toward a much-needed shift in our approach to our global carbon footprint.

“When you look at electric or hybrid motorsport, whether that be Formula 1 or some of the other series coming out, it’s a competition around efficiency,” said Lambert.

“We’re at a tipping point with electrification in automotive where the industry is moving toward EVs, and efficiency is going to become more and more important — that’s an area we’ve got a lot of experience in that we’re trying to apply to our automotive products.”

It's all about efficiency and we see that as being a really big mega-trend, not just for the automotive industry but also for sustainability in the future

Lambert told The Engineer that ultimately, we’re in the middle of electrification’s ‘second wave’, the first having taken place back in the 2010s pioneered by innovators like Tesla.

“Now you’ve got the second wave, most OEMs are trying to bring EVs to market. You probably can’t go into a forecourt at the moment without them trying to show you their new EV,” he said. “They’re going to be competing with each other and efficiency is going to become the core of that competition.

“From a product point of view the more efficient a product is, the cheaper it’ll be, the better it’ll be to drive and the quicker it’ll charge — all of these things have a direct impact of course on sustainability. The more efficient the product is, the smaller the battery needs to be so it’ll be using less resources to build the battery. You’ll lose less heat when charging it, so you’ll be putting less pressure on the grid.

“It's all about efficiency and we see that as being a really big mega-trend, not just for the automotive industry but also for sustainability in the future.”

One of the biggest current focuses for McLaren Applied on the automotive side of things is its 800V silicon carbide inverter, which the company is developing and bringing to market in line with what Lambert describes as a shift in expectancy within the EV market, promising higher speed, faster charging and longer range.

“Most EVs on the road today are 400V, the next step is going to be 800V, the main reason being charging,” Lambert said. “With that, we can also introduce silicon carbide technology which is the core technology within the inverter, and that’s what we’ve been [working with] in motorsport for the last eight or nine years.

“We’ve been developing motorsport products from silicon carbide because it’s the most efficient way of doing it, but of course new technologies are very expensive and have only really worked in F1 because they can take that expense. Taking that learning into automotive as the costs come down makes a lot of sense.” 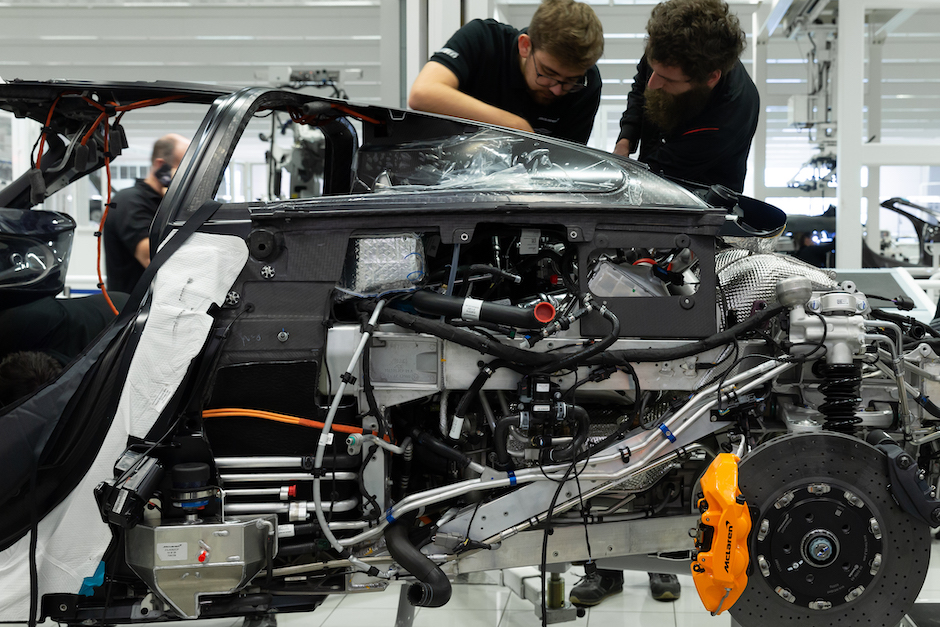 The company is currently working on a project called ESCAPE (End-to-end Supply Chain development for Automotive Power Electronics), which involves collaboration with 11 other companies to develop a silicon carbide supply chain within the UK. These include automotive sector non-profit AESIN (operated by industry association TechWorks), the Compound Semiconductor Applications Catapult and Warwick University amongst others.

The project is part-funded by UK government, as part of its £33m investment through the Advanced Propulsion Centre (APC) to accelerate low-carbon automotive capabilities.

“It helps to build up the UK's sovereign capability for this technology, because it will be the standard technology used in electric vehicles, and it also helps on the sustainability side on reducing the amount of embedded carbon in a particular component or system — you’re not having to fly parts all over the world, so building a more localised supply chain helps with that overall Net Zero point and reducing our carbon emissions more generally,” Lambert said.

The idea of creating the most localised supply chain as is possible is ‘huge not just from a sustainability point of view, but with issues surrounding Brexit and the global position with uncertainty around tariffs’, he added.

“We have a number of suppliers and partners that we work with to understand and help develop their long-term roadmap from a technology point of view.

“The silicon carbide technology that we would use gives us an alternative route to go through in the case of being let down for example — we’ve got an alternative route which means we can still get products out, but it also brings up more competition in the marketplace so it actually means lower prices and hopefully more innovation. We’re trying to foster that element of competition in that market.”

Whilst the benefits of McLaren Applied’s motorsport expertise are perhaps most obviously seen on the automotive side, the concept of taking that motorsport knowledge and applying it elsewhere to accelerate digital transformation across other industries has been key to the company’s vision in sustainable innovation.

“One of the areas we excel in motorsport is analysing of data: so that could be capturing data, processing data, transmitting it and visualising it, using that to make informed decisions,” said Lambert.

Amongst its motorsport-derived suite of analytics, telemetry and control technologies, Applied is finding key solutions for maximising efficiency in applications such as rail and bus operations, waste management, renewable energy and mining amongst others.

Elsewhere, its Fleet Connect solution is helping to improve WiFi performance across fast moving fleets by utilising algorithms that can aggregate any available network, including 4G, 5G, mmWave and WiFi at high speeds. The company announced a deal with Avanti West Coast back in August this year to deploy the 10 Gbps platform, described as an industry-first, across 99 of Avanti’s Pendolino, Voyager and AT300 trains.

Whilst we’re at a pivotal point in the shift toward electrification and lower-carbon technologies, the challenges that we face and that will continue to lie ahead shouldn’t be underestimated, particularly where the global supply chain is concerned.

Lambert pointed out that there will always be the ‘standard engineering challenge’ of bringing out new technologies and all of the uncertainties that go alongside it, but trying to utilise technologies that aren’t yet established whilst dealing with the global semiconductor supply chain issues we’re currently seeing is providing additional obstacles.

“The other side of that coin is we’re trying to get the prices to a point where we can bring these benefits to the consumers, at a price they’re going to pay for,” he said. “So it’s trying to navigate the whole supply and demand thing… given the global socioeconomic problems we’re seeing, it’s a real challenge to make all of that work.

“You can buy EVs now and they’re getting close to price parity [with internal combustion engine vehicles], as soon as that tips over and as soon as people start to realise that it’s not just about buying the car but about the reduced running costs, reduced wear and tear and reduced fuel costs obviously… that’ll have a big impact, and we’re just on the cusp of that at the moment.”

From the EV perspective, aside from cost, the other biggest barrier at the moment is around charging anxiety, Lambert added. Whilst historically people have been concerned about range, this is less of an issue now that EVs with around a 300 mile range are available. The concern is shifting toward whether charging can be done fast and efficiently enough, which is where Lambert believes the 800V inverter will have a big impact on the market.

“We’ve been on the stretch of EVs are going to be the future. We've had dates of 2040, then 2035, then 2030 for banning of new IC engine vehicles,” he said. “I think the overarching trend is that all of those predictions are too conservative, this stuff is happening quicker than everyone expected and every time there’s a refresh of the forecast, it comes out that it’s going to happen a lot quicker.”

Beyond mainstream automotive, McLaren Applied is looking at where it can most enhance operations across aviation and aerospace by implementing key sustainable technologies into these industries. A recent example of this is the company’s involvement with the Rolls-Royce Spirit of Innovation aircraft, which completed its maiden flight on 15th September running solely on electric power.

McLaren Applied supplied the battery management systems for the 300mph electric jet, which boasts a 400kW electric powertrain and the most power-dense battery pack ever to be assembled for an aircraft.

Working on projects like these comes naturally thanks to the company’s long-standing history in electrification, which will no doubt continue to pay off in the Net Zero age. From the group's early steps into electrification, developing the motor inverter for the world’s first hybrid hypercar, the McLaren P1, through to its position as supplier of the standard Formula E battery since 2018 — its work in developing the most power-dense solutions makes it well-placed to continue delivering these benefits across industries with continuously evolving future products.

“It’s about really pushing those boundaries, and making sure you get the most out of that technology, then making sure that can trickle down into mainstream automotive and have wider benefits for society,” Lambert said.