From oil to aerospace - a spotlight on UAE manufacturing

In the space of just over a decade, Abu Dhabi’s Strata Manufacturing has grown to become a major supplier to the world’s largest aircraft manufacturers, exemplifying the UAE’s advanced manufacturing evolution. Mike Farrish reports.

With a population of just under 10 million, most of them expatriates, and a location on the southern fringes of the Arabian Gulf the United Arab Emirates (UAE) does not have the reputation of being a centre of advanced manufacturing. Indeed the country, which only achieved independence just over 50 years ago, is best known as a source of oil and natural gas in which it ranks as sixth and seventh, respectively, in terms of known reserves at a global level.

But an hour or so’s drive west from Dubai, along a stretch of motorway a little inland from the coast with desert and even a few wild camels on either side, brings you into the UAE state of Abu Dhabi. There, appropriately close by Al Ain International airport, is Strata Manufacturing, one of the showcases of the country’s drive to use the revenues from its oil and gas resources to become a modern industrial force.

The appropriateness is because, as CEO Ismail Abdalla explains, a site which only a little over ten years ago was empty space is now the location for a business occupying 31,500m2 of floorspace employing over 600 people in the production of composite aerostructures. Moreover the company, which was set up in 2009 and started operations at the site the following year, has already established partnerships with several major aircraft manufacturers such as Airbus, Boeing – it is the sole supplier worldwide for the tailfin of the Boeing 787 passenger aircraft - and the Leonardo-Finmeccanica Aero-structures Division. It also acts as a supplier to Pilatus, SAAB and S.A.B.C.

As such what comes through strongly is that what the company relies on for competitive edge is not any particular technical capability but instead reliability and punctuality in meeting orders. This is a point Abdalla stresses. “We didn’t miss any deadlines even during the worst of Covid,” he confirms. Indeed July of 2020, for instance, right in the depth of the pandemic saw the company assume fabrication as well as assembly responsibilities for the inboard flaps of the Airbus A350-900 aircraft. Since the facility went into action it has, Abdalla estimates, manufactured around 68,000 parts in total and generally has around 20 different ‘work packages’ live at any one time.

The composition of the workforce, though, is perhaps unusual. No less than 88 per cent are, Abdalla confirms, “Emirati females”. Abdalla makes it plain that this is the result of deliberate policy. “Strata’s commitment to creating opportunities for women is helping to redefine the role of women in the manufacturing sector and we are being acknowledged for this,” he states unequivocally. He explains that like many other companies, Strata follows the guidance of the UAE government in developing female talents to enable them to have leadership positions. “In the last 12 years Strata has graduated the first female Emirati technician and the first Emirati NDT level 1 and NDT level 2 supervisors and engineers,” he says.

Indeed, Abdalla continues, the company has “the first female head of production in the UAE”. This is Noura Mubarak Al Braiki, who has been with the company since 2010 and holds a Bachelor’s degree in business management and a Master’s degree in engineering management, both of which she gained within the country’s higher education system..

The explanation for this seems to be a deliberate policy to set a benchmark for modernism in employment practice as part of a wider national strategy to push the country to the forefront of manufacturing at a global level. This synergy of corporate and national intentions follows on naturally enough from the fact that the company is 100 per cent owned by the UAE government’s investment agency Mubadala. This is also something with which Abdalla also identifies himself at a personal level. He explains that he was born in 1983 and sees himself as very much a product of the country’s modernisation drive. Interestingly he studied engineering in the UK taking a degree at Queen Mary College in London.

Elsewhere in the company, though, it is possible to find “over 20 other nationalities”. A glance at the company’s ‘Leadership Team’ listed on its website, for instance, indicates that of the seven individuals named including Abdalla three come from the UAE with the others originating either in Europe or the Indian sub-continent.

Nevertheless, one ambition the company has for what at the moment is just an adjacent patch of waste ground will make it highly distinctive in global manufacturing terms. In just two year’s time that now empty space will become, Abdalla says, “just the fourth site in the world to manufacture carbon fibre pre-preg materials.” The site will then obviously act as a supplier to Strata but will also, Abdalla indicates, look to become a supplier of the materials to companies elsewhere. 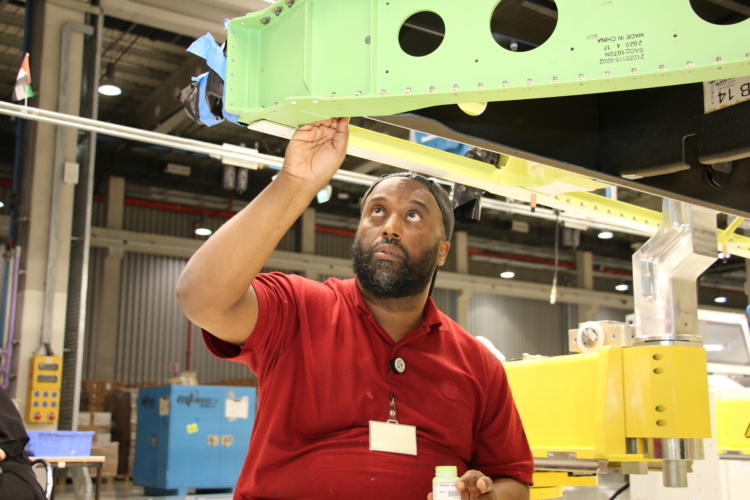 Moreover in addition to manufacturing aircraft structure parts the company has begun to diversify and enter new industries. Like companies elsewhere the Covid pandemic found it making respirators, but it also now makes other items as varied as satellite parts and an exoskeleton for gait assistance. It has also used its carbon fibre expertise to produce a prototype ultra-lightweight bicycle. One device that looks like a large helmet, though, can safely be assumed to be aimed at a purely local market. This is a robotic jockey for camel racing. The device is positioned on the animal’s back and is operated remotely to save a human rider the discomfort and potential hazards they might otherwise encounter.

What perhaps Strata exemplifies most strongly is that unlike older manufacturing industries which needed to be located close to the source of their raw materials modern manufacturing using artificial materials suffers no such restraint. Instead the essentials are appropriate investment, a supply of young skilled workers with a leavening of imported experience if need be and easy access to transport links to supply customers anywhere in the world. Ensure those and, as the company shows, what a little over a decade ago was a patch of waste ground in a country with no manufacturing tradition can even in that short time become a force at the leading edge of manufacturing at a literally global level.

Paris Air Show launches with the spotlight on propulsion, manufacturing and jobs