Flying towards an electric future: Airbus’s technology chief talks about the clean, green aircraft of the future 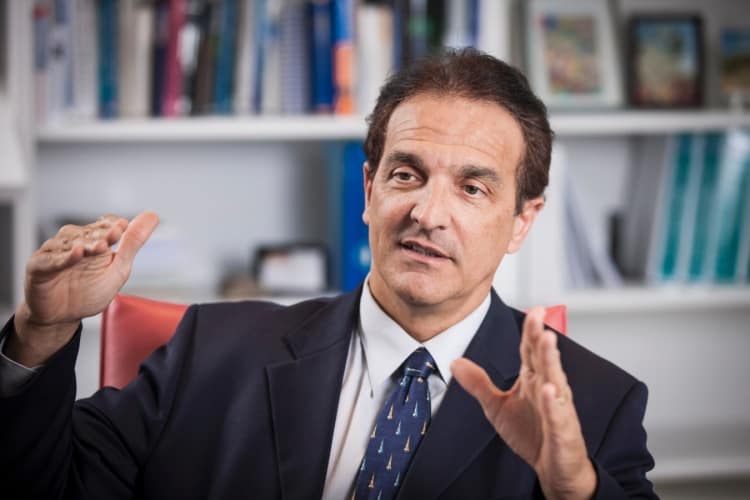 Dr Botti also holds honorary degrees from the universities of Bath and Cardiff, and from the University of South Alabama

Joins Renault as an apprentice

Joins chassis division of General Motors in the US

Becomes a Senator at German Academy of Science and Engineering

Barely any engineering sector depends as much on the development of new technology as aerospace; and although it’s often defence that’s seen as the part of the sector where most development takes place, recent years have seen civil aerospace also being the cradle of much new development. The tightening of regulations on the environmental profile of flying, along with new materials and processes, have all driven R&D in the sector. For Airbus, the world’s second-largest aircraft manufacturer, it’s taken the technologies of flight in some unexpected directions.

Although Jean Botti is a mechanical engineer by training, he notes that at Toulouse University, the course was very much oriented towards aerospace as it is that city's major industry. As befits a chief technology officer, Botti is very keen to talk about the forward-looking development projects that Airbus is currently undertaking. Closest to his heart seems to be the electric aircraft project E-Fan, which earlier this year saw the company fly a small two-seater aircraft across the English Channel in a conscious echo of Louis Blériot’s famous feat in 1909 – although this time, without the spur of a cash prize from the Daily Mail.

The small size of the E-Fan aircraft has led some to dismiss the project as a sideshow, but Botti insists that it represents a serious long-term goal for Airbus. The ultimate aim of the project is to develop an electric airliner, initially with around 100 seats, which the company is currently calling E-Thrust. “This is a learning curve for us. We have to start with the small aircraft with power in kilovolts, and work up to megavolts. We couldn’t possibly do it in one go.”

Part of the goal of the E-Thrust project – but only part – is environmental. When the aircraft’s engines run on battery power, the aircraft produces no emissions. “If you look at where the world trends are heading by the 2030s, with increased numbers of people in cities and the rise of megacities, there will inevitably be more and more congestion and pollution,” Botti said. “And if you look at where the most polluted part of the city is, in general it’s around the airport; I’m not only talking about CO2 and NOx here, but also about noise pollution. It has to be better to take off and land with very quiet electric engines.” He added that aircraft could arrive and depart later at night and in the early hours without disturbing the neighbours.

As this implies, these electric airliners are likely to be hybrids, with an on-board generator charging the batteries and feeding the motors. This also allows the option of charging the batteries via ‘windmilling’ the propellers when the aircraft is slowing down; precisely analogous to recovering energy during braking in a hybrid car. “This does mean that you emit greenhouse gases when the aircraft is in cruise,” Botti admitted, “but certainly no more than a standard aircraft does; with windmilling, probably less.”

Airbus has for some years been investigating the use of biofuels to power aircraft, flying a test using a fuel derived from algae in 2010; Botti pointed out that the fuel proved to be more efficient than conventional kerosene. He feels that biofuels are the future for air transport. “We chair a German consortium called Aireg [Aviation Initiative for Renewable Energy in Germany], which Boeing’s also associated with which is aimed at exploiting and understanding the impact of biofuels,” he said. “The main problem with biofuels today is making a justifiable business case, which with today’s oil prices is very difficult. The technical aspects are really not that worrisome.” However, he isn’t prescriptive. “I don’t think there will be single biofuel technology that fits all applications. The most important thing is to establish common specification and regulations: that’s our job.”

In formal terms, E-Thrust and its family won’t even be Airbus products; the company has created a new subsidiary called Voltair to commercialise the technology; symbolic of the clean break it represents from its more-established turbojet-powered aircraft families. “We didn’t want to mix the message,” Botti said. Voltair operates out of new premises in Toulouse: “When I created the plant that will make E-Fan, I had the objective that young engineers will start up and become the experts that we need in the future to make larger electric aircraft; that’s knowledge that currently doesn’t exist,” he added. Technology development is looking at new batteries and motors using high-temperature superconductors; Botti even mentioned the possibility of nuclear fusion to power such aircraft. “We are not looking at next year or even next decade with this project, and we want to keep such possibilities in mind, even if they seem very far-fetched now,” he said.

Besides exploring environmental advantages, the other goal for the Voltair project is to investigate new aircraft architecture. Changing the current look of most large civil airliners – wings at the bottom of the fuselage, single vertical fin, two tailplanes, engines under the wings – is known in the aerospace business as ‘breaking the paradigm’, and it’s a paradigm that has held firm for several decades. But along with others, Botti can see the end of the paradigm.

One of the limiting factors for the current paradigm is engines. Turbines are getting wider, because makers are exploiting efficiency improvements that come from increasing the bypass ratio (the ratio of the air volume compressed by the engine’s fans to the volume that actually goes through the engine’s combustion stage). Eventually, the engines will be too wide to fit under the wing and allow the aircraft to taxi without scraping the ground.

In electric aircraft, it will be vital to make sure as little of the energy output of the engines is wasted in overcoming drag, and Botti said they will have to break the paradigm. “They are going to look very different from the aircraft we are used to,” he said. “I think it’s inevitable that we’ll see a lot more integration of the engines into the airframe, in particular.” This design experience, he added, will then inform the design of conventional aircraft into the future.

Indeed, the current E-Thrust concept rendering shows engines integrated into the roots of wings and the rear fuselage: a partial return to the design of the 1950s that gave rise to aircraft such as the de Havilland Comet.

Airbus’s other long-term projects are, perhaps surprisingly, outside of the civil aviation sector. Perlan, for example, is an atmospheric research project involving the development of a glider designed to fly at an altitude of 90,000ft. “We are looking at the prospect for supersonic passenger flight, and those aircraft will certainly fly at that altitude,” Botti said. The goal of Perlan – which was started in 2006 by the late adventurer Steve Fossett – is to investigate a phenomenon called giant mountain waves, which are ‘stationary’ changing regions of atmospheric pressure caused by air forced to rise over mountains, escarpments or even masses of cold air; the waves then rise in the lee. They have been implicated in phenomena such as cloud formation, atmospheric mixing at the poles, and sudden changes in weather that affect air traffic in regions such as South America. “The programme stopped in 2007 after Fossett died,” Botti said, “but we decided we had to get involved and fund it because it’s such a fantastic programme: to understand what’s happening with giant mountain waves, how they contribute to rapid changes in weather and to the climate.” Currently, the schedule for Perlan includes the building of a pressurised glider based on Fossett’s design, to break the world glider altitude record in 2016, beating the mark of 50,671ft (15,460m) achieved by Fossett and co-pilot Einar Enevoldson in 2006.

Another long-running project is Zephyr, which aims to make a solar-powered electric aircraft capable of remaining aloft for long periods. Intended to act as a ‘high-altitude pseudo-satellite (HAPS)’ and provide long-term surveillance or services such as telecommunications or internet coverage for the area in which it is deployed, Zephyr’s seventh iteration broke the UAV endurance record in 2014 with an 11-day flight, particularly significant as it was during winter conditions with short daylight in which its solar cells could charge its batteries.