British aviation engineer and legendary pilot Frank Whittle was the main player in the development of the jet engine that was to change the face of 20th century aviation. Written by Nick Smith

Air Commodore Frank Whittle seated at his desk at during World War II. The two models on his desk are the first British prototype jet aircraft to fly and the Meteor, the first jet to enter service with the RAF. - UK Government public domain

If you want to start an argument among a group of engineering historians, raise the idea that the age of jet-propelled flight was Sir Frank Whittle’s great legacy. There will be those that challenge it outright, saying he wasn’t the first ‘invent’ the jet engine because there was pioneering work in the field by French engineer Maxime Guillaume that predated Whittle’s. There will be others who say that the birth of the jet engine can be pinpointed unambiguously to 16 January 1930, when Whittle submitted his first patent showing a two-stage axial compressor feeding a single-sided centrifugal compressor.

Yet more will discuss German engineer Hans von Ohain’s contribution to the discipline by designing the first operational jet engine. Whittle’s biographers fall over themselves to claim that their radically different outlooks are the only true version of events, while the BBC rather lamely describes Whittle as, “a Royal Air Force officer who made a major contribution to the invention of the jet engine”. His entry in Britannica credits Whittle as ‘inventor’ without qualification. Whichever team you find yourself siding with, perhaps the most sensible neutral position comes from Duncan Campbell-Smith who diplomatically writes in Jet Man: The Making and Breaking of Frank Whittle: “To try telling the tale of the jet’s origins without assigning Whittle a central role… is to rehearse Hamlet without the Prince”.

Frank Whittle was born on 1 June 1907 in Coventry, a city in the UK’s industrial Midlands renowned for watchmaking, the manufacture of bicycles, motorbikes and machine tools. The eldest son of Moses Whittle and Sara Garlick, the young Frank was brought up in an engineering ambience. His father owned a mechanical engineering workshop where his son helped out, working on lathes and a single-cylinder gas engine. But financial pressures on the business meant that Frank’s education at Milverton School – where he was considered lazy and rebellious – became too much of a financial burden and he was forced to leave after two years. Finding himself spending more time in his father’s workshop and making model aeroplanes, his education became informal, consisting of visits to the local library where he read about engineering, turbines and the theory of flight. By the age of 15, Whittle had decided that he wanted to be a pilot and applied to the Royal Air Force. 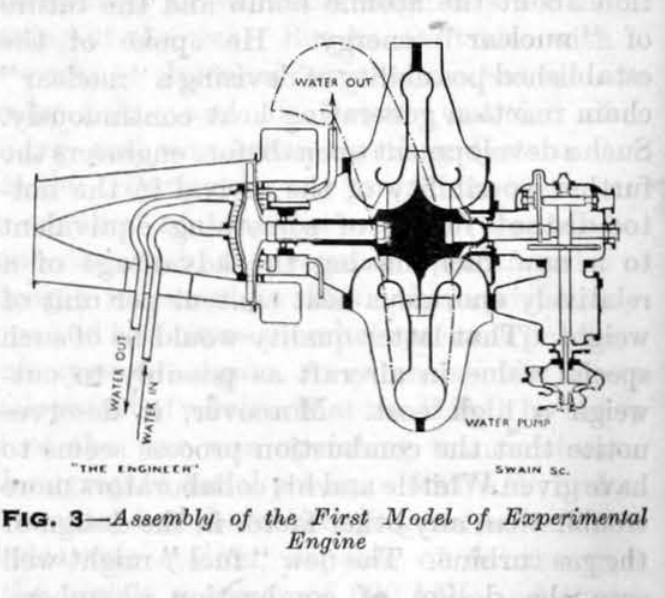 His first application failed on the grounds that he was too small to be even a ‘boy entrant’ (apprentice), while his second – after growing three inches in height – was rejected for unspecified reasons with no opportunity to appeal. Undeterred, he re-applied under an assumed name, a ruse in which he was successful and, in September 1923 as ‘364365 Boy Whittle, F’ he started his three-year training as an aircraft mechanic in No. 1 Squadron of No. 4 Apprentices Wing, RAF Cranwell. In 1926, due to his outstanding qualities as an apprentice, he was awarded a cadetship at the RAF College (also at Cranwell) to train as an officer and pilot. Here he developed a reputation for ostentatious aerobatics and his flight logbook contains red ink warnings about overconfidence. Due to dangerous flying in an Armstrong Whitworth Siskin, he was disqualified from the end of term flying contest.

As a cadet Whittle had written a thesis – Future Developments in Aircraft Design – in which he argued that to achieve long ranges and high speeds, planes needed to fly at higher altitudes where air resistance is lower. Demonstrating that incremental improvements in existing propeller engines were unlikely to make such flight routine, the paper goes on to describe what is now known as a motorjet, in which a piston engine provides compressed air to a combustion chamber whose exhaust gets used directly for thrust. The idea was hardly new, but Whittle’s light-bulb moment was that at increased altitudes the lower outside air density would increase the design’s efficiency: “I came to the general conclusion that if very high speeds were to be combined with long range, it would be necessary to fly at very great height, where the low air density would greatly reduce resistance in proportion to speed”. When further calculations showed it would weigh the same as a conventional engine of the same thrust, the motorjet was abandoned. Turning his attention to turbine technology, Whittle wrote a paper on a turbojet engine design that was passed around the RAF until it landed on the desk of compressor and turbine specialist A A Griffith at the Royal Aircraft Establishment, who dismissed it as ‘impracticable’.

Despite this setback, Whittle went ahead and applied for a patent that was granted in January 1930. With the President of the Air Council declaring that there was no need for secrecy, it was published in 1931. According to the official Frank Whittle website: “copies were purchased by, amongst others, the German Trade Commission in London. It was then circulated by technical journal to the German Air Ministry (RLM), aero-engine and airframe manufacturers and, most significantly, to the research establishments”. The patent lapsed in January 1934 due to Whittle’s inability to produce the £5 required to extend it (the Air Ministry had refused his request to assist with funds). Meanwhile, Germany gratefully added the turbojet to its watchlist of alternative technologies for aeropropulsion.

In 1934 Whittle decamped to the University of Cambridge to take a Mechanical Sciences tripos and where he received a letter that would rescue the turbojet from oblivion in the UK. From former Cranwell cadet and close friend, Rolf Dudley Williams, the letter proposed raising private capital to develop the engine. With the help of another friend, Colingwood Tinling, and investment bankers Falk and Partners, the company Power Jets was formed. Having completed his studies with a year to spare, Whittle used the time at Cambridge for ‘post graduate research’. The RAF placed him on the Special Duties List to allow him to work on his engine. Called the WU (‘Whittle Unit’), it first ran successfully at the British Thompson-Houston works at Rugby on 12 April 1937. But the project was to be dogged for years by delays, lack of funds and technical issues.

With war now looming and Power Jets in financial disarray, stress took its toll on Whittle. Authors John Golley (in Jet) and Andrew Nahum (in Frank Whittle) detail how the engineer, in an attempt to keep pace with 16-hour workdays, developed a three-pack a day cigarette habit and took amphetamines to stay awake during the day, which he offset with sleeping tablets at night. Addicted to Benzedrine, Whittle developed an ‘explosive’ temper. But following protracted negotiations with the Air Ministry the project was secured in 1940. By April 1941, it was ready for tests and the first flight was made on 15 May 1941. By October the United States had heard of the project and had requested to become involved. By 1944, Whittle who was now a group captain, watched Power Jets undergo the rancorous process of nationalisation as it become officially known a Power Jets (Research and Development). Shortly after the end of the Second World War he was hospitalised with exhaustion, and resigned from the company that was merged with the gas turbine division of the RAE to form the National Gas Turbine Establishment (NGTE) at Farnborough. 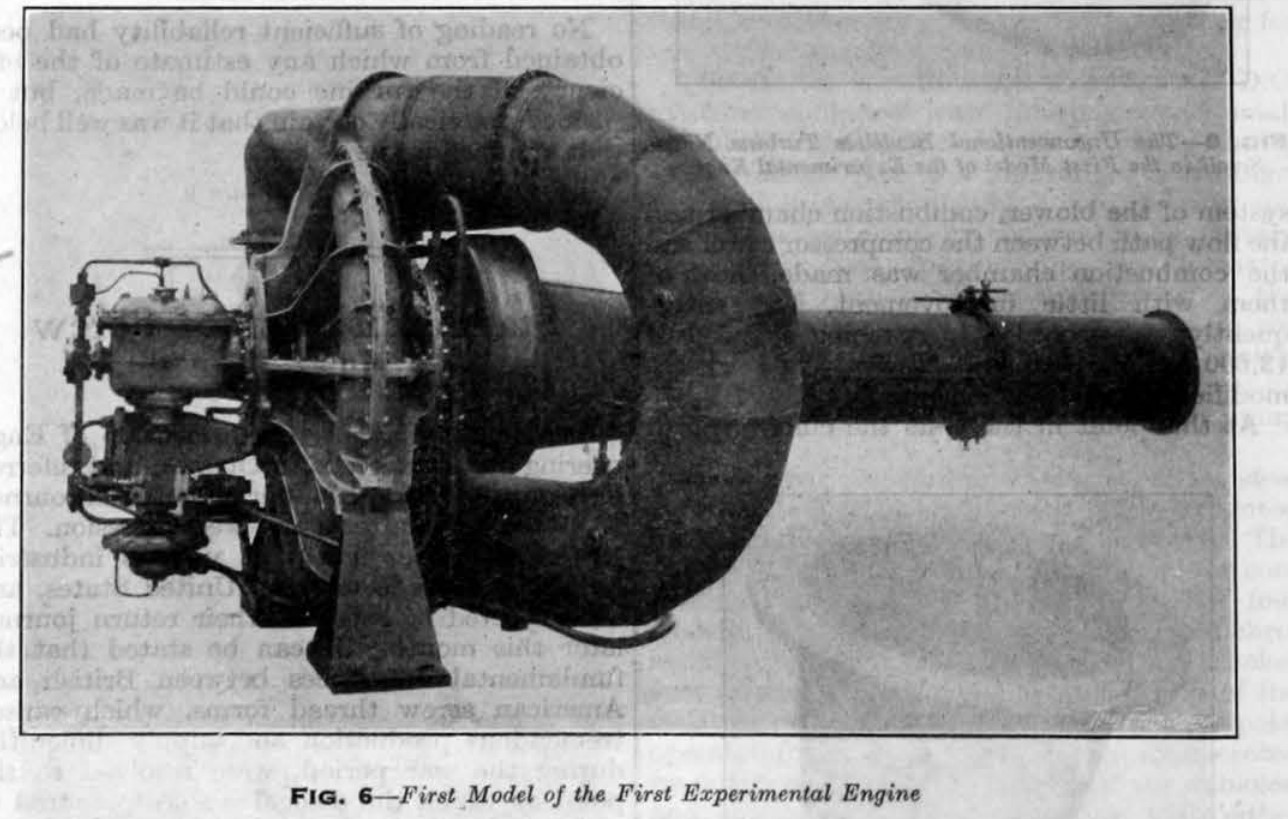 During a lecture tour in the US, Whittle collapsed again. He retired from the RAF on medical grounds in August 1948, leaving with the rank of air commodore. He joined BOAC as a technical advisor on aircraft gas turbines and travelled extensively over the next few years, viewing jet engine developments in the United States, Canada, Africa, Asia and the Middle East. He left BOAC to write his autobiography, Jet: The Story of a Pioneer. He was awarded the Royal Society of Arts’ Albert Medal that year. He was later to work for Shell and Bristol Aero Engines before emigrating to the US where he took up the post of NAVAIR Research Professor at the United States Naval Academy.

While living in America. Whittle frequented the lecture circuit with his former rival Hans von Ohain, who acknowledged Whittle’s part in the story of the jet engine by saying: “If Hitler or Goering had heard that there is a man in England who flies 500 mph in a small experimental plane and that it is coming into development, it is likely that World War II would not have come into being.” Air Commodore Sir Frank Whittle, OM, KBE, CB, FRS, Hon FRAeS died of lung cancer at the age of 89 on 9 August 1996 at home in Columbia, Maryland.

From The archive: In 1945 Whittle reflected on his invention of the first jet propulsion gas turbine in an article for The Engineer