In yet another recent example of the growing interest in hydrogen as a low carbon power source, last month (September 2020) saw the mainline debut of HydroFLEX, the UK's first hydrogen fueled train.  With a number of other UK hydrogen rail projects underway, The Engineer asked an expert panel about the current state of the art, and the longer term potential of hydrogen rail.

Dr Stuart Hillmansen: The Birmingham Centre for Railway Research and Education have been leading the development of hydrogen-fueled railway vehicle technology over the last decade.  This has included detailed concept design work and modelling, the development of scale demonstrators including the Hydrogen Hero 1/5 scale locomotive, and more recently in partnership with Porterbrook, the HydroFLEX train which has just been approved for mainline applications and run on Network Rail infrastructure.

Our group is also working with key partners to develop rail specific refueling solutions which will enable future hydrogen trains to be refueled rapidly in a depot environment.

Mike Muldoon: Alstom is the world leader in hydrogen fuelled rail technology.  Our Coradia iLint train is the only hydrogen fuelled train to have operated in passenger service covering over 180,000km in service in Germany and now operating in Austria.  It has been successfully trialled in the Netherlands and around the German regions.  41 trains have been sold in two contracts that include 30 year maintenance support agreements with Alstom.   Here in the UK, working with Eversholt Rail, we have developed the Breeze, a hydrogen train for the UK rail network which we are able to offer today for immediate orders.  The Breeze is designed to replace regional DMUs (diesel multiple units) across the UK and discussions are ongoing with numerous operators and stakeholders to secure fleet deployments.

Alice Gillman: We began our hydrogen project two years ago when it became apparent that hydrogen would be a key part of the decarbonization mix.  As the only company with an independently powered emission-free train fully approved for passenger service (our Class 230 BEMU) we knew we could build on that technology and our current approvals to deliver such a train.

Outline how your technology works and how it could be deployed on the UK’s rail network?

Mike Muldoon: Hydrogen “fuelled” vehicles typically use fuel cells which combine hydrogen from onboard storage tanks with oxygen from the atmosphere to create electricity with by-products of water vapour and heat.  It is a chemical process that does not involve combustion and there are no carbon or other harmful emissions.

Hydrogen has huge potential for the UK rail network.  Where electrification cannot go, hydrogen offers long range performance which can be commissioned today and in service by 2024.

Both the Coradia iLint and the Breeze are hydrogen hybrids that take primary power from the fuel cell that is supplemented by a battery when required.  A hybrid drive optimises energy efficiency of the train, allowing for regenerative energy capture in the battery and mixing energy sources to power the train.  These trains are designed to operate where no other energy source is available, they are not bi-mode, they are a like for like replacement for a DMU intended to offer equivalent or superior performance over ranges of at least 600 miles.

Dr Stuart Hillmansen: The HydroFLEX train has a new propulsion system which is integrated into the existing traction power electronics system.  The new propulsion system combines a fuel cell and a traction battery to provide power into the train.  The traction battery effectively sets the DC voltage on the DC bus, and the fuel cell is controlled as a current source, injecting current into the DC bus in response to the various states of the traction system and battery.  We can therefore run the fuel cell in its most optimized state and minimize the quantity of hydrogen which is used.

The Hydrogen is stored in high pressure lightweight tanks.  The gas is stored at 350 Bar, and passes through a regulator before being delivered to the fuel cell.

The HydroFLEX is fully approved for mainline operation and provides a quiet and clean passenger experience with the only tail pipe emission being water.  If green hydrogen is used then the vehicle can be completely decarbonized.

Alice Gillman: All our technology revolves around batteries – a hydrogen train is simply a battery train with the fuel cell used to charge the batteries, not for traction.  Fuel cells are not responsive enough to cope with the demands of a train whereas batteries are much more flexible.

A key part of introducing hydrogen trains to the UK is the gauge – unlike Alstom’s German trains the tanks cannot be stored on the roof in the UK.

Tanks and fuel cell will sit underneath the Trailer Cars and give a daily range of circa 650 miles.

Describe the current status of any trials / deployments?

Dr Stuart Hillmansen: The HydroFLEX has recently been demonstrated in operation on the mainline.  Funding from the Department for Transport’s First of a Kind scheme has been secured to advance the design to the next stage, in order to develop a production version of the unit, which can then be deployed in passenger service.  By 2022 we expect to be operating the next version of HydroFLEX on the mainline.

Mike Muldoon: The underpinning technology for Breeze is derived from the Coradia iLint.  As such two fully homologated, production ready pre-series trains been extensively tested both on private test tracks and in daily passenger service over the last 4 years.  These trials and operations have allowed us to accumulate extensive running data for all of the onboard systems, optimising hybrid efficiency and hydrogen fuel consumption to give the best possible balance between the fuel cells and batteries.  We have also developed the train control systems and the overall system integration to ensure that the train communicates with its driver, and that its operational state is readily comprehensible to the driver with feeds into driver information systems and remote condition monitoring.  Extensive operation has also validated our simulation tools now being deployed on product development for all of our hydrogen traction programmes around the world.

Alice Gillman: As our design is simply a change of charging source from the fleet of battery/diesel hybrids we have already built for Transport for Wales we have an advanced concept and will simply need incremental approvals for the design of a hydrogen train.  We have now had approved:

Our Fast Charge is also nearly completing its Network Rail approvals so we have extensive experience of the system and successfully achieving the necessary approvals.

Outline any related work that you have done around hydrogen supply and fueling?

Dr Stuart Hillmansen: BCRRE are working with Vanguard STS, TP Group, and Fuel Cell Systems to develop bespoke dedicated refueling solutions for Railway Applications.  We plan to use renewable electricity to electrolyze water and produce high purity hydrogen which can be used to fuel hydrogen trains.  This product, known as the HydroHUB has been developed in a modular manner and is already used as part of the refueling system for HydroFLEX.

Mike Muldoon: A hydrogen train fleet, even if modestly sized (ten trains) has a rate of hydrogen consumption measured in tonnes per day.  That consumption is highly predictable over a long term period.  As such, it is attractive to what is an emerging market for hydrogen supply.  For this reason there are many potential supply partners keen to be involved in supplying rail fleets.  The hydrogen itself can either be produced on site at the refuelling station or drawn from other sources.  When generated from renewable sources, it is entirely carbon free and can even have negative carbon content in certain circumstances.  Alstom has formed a number of supply partnerships as part of our Coradia iLint contracts.  Many regional authorities have industrial hydrogen footprint or renewable energy operators which are also keen to become involved.  The fuelling process itself is proven and uses already standardised equipment developed originally for commercial road vehicles.

Alice Gillman: We haven’t! As train manufacturers this is not our area of expertise.  We would be able to define the amount of hydrogen needed for individual routes and the sensible location of the fueling point.

In general terms, what is the potential of hydrogen on the UK rail network?

Dr Stuart Hillmansen: Network Rail’s Traction Decarbonisation Network Strategy (TDNS) clearly articulates the need for hydrogen to be a vital part of the GB railway system. Therefore the development and deployment of these vehicles is inevitable. There will be an interesting interplay between the eventual extent of the electrification which is required, and the performance and costs for the hydrogen vehicles.  It is our expectation that rapid developments in the performance and capability of hydrogen vehicles could mean that we end up with a lower eventual electrification coverage than is anticipated by the TDNS in 2050. 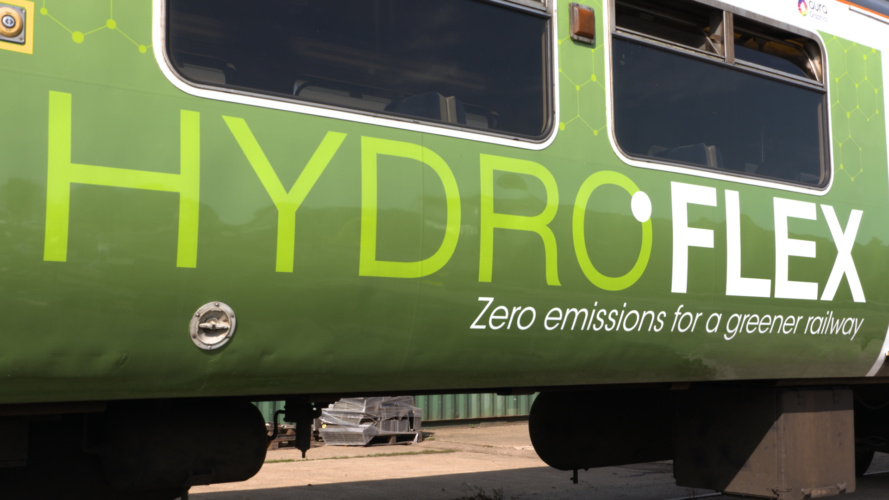 Mike Muldoon: Hydrogen has huge potential for the UK rail network.  Where electrification cannot go, hydrogen offers long range performance which can be commissioned today and in service by 2024.  Where electrification will, or may, go in decades to come, those same hydrogen trains offer a short – medium term zero emission transition technology to decarbonise the railway ahead of electrification.  Any hydrogen infrastructure deployed (production facilities and fuelling stations) need not be purely rail specific, they can support multiple modes of users such as buses, taxis, road fleets, etc.  And if, after transition operations cease, they are no longer required for rail they can be repurposed to other uses, and the trains redeployed elsewhere.  There are around 2400 DMU cars in operation today.  If just half of these were replaced with hydrogen units over 533,000 tonnes of CO2e per year would be eliminated from UK rail emissions.

Alice Gillman: We believe that plans to electrify the main sections of the network make complete sense and alternative technologies can be used as the ideal supplement to that programme.

Hydrogen is interesting as it is obviously an industry in its infancy in the UK and work needs to be done outside of the rail sector – particularly in infrastructure and the supply of green hydrogen.

Hydrogen trains are of course entirely feasible and the technology has been proven so we believe it is simply a matter of time before hydrogen trains run on the UK network.  As explained above hydrogen trains are essentially battery trains so they have all the advantages of performance, zero emissions and significant range – when combined with Fast Charge stations that can be nigh on limitless.  There are many lines across the UK where hydrogen trains could operate successfully and Vivarail is ready to play its part in delivering those trains.

Get on track with a career in the rail industry