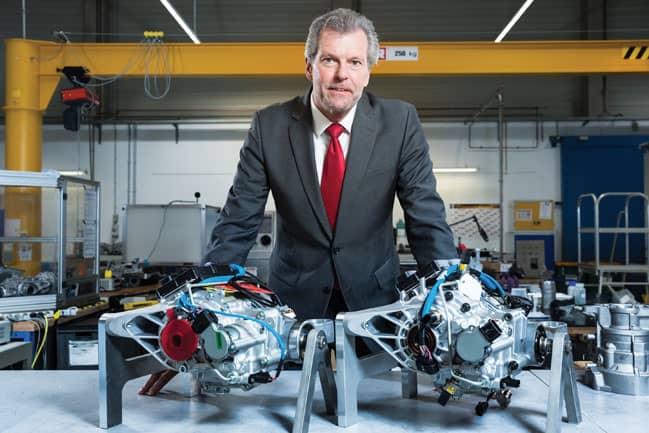 It is a fact that in the engineering sector, you’re  only known if you sell direct  to the public. The vast array of companies in the supply chain are, with a few exceptions, unknown to the general public unless they are a major local employer. For companies whose contributions are important to the product known by the public, this can  be a source of frustration.

“We’re definitely trying to be better known,” said Rob Rickell, president of GKN Driveline. “It has real advantages, especially when you’re trying to be more active in the recruitment field.”

GKN is, Rickell admits, not a well-known name. Despite this, it is a major player in the engineering supply chain, especially in automotive and aerospace. The company has some 50,000 employees in more than 30 countries, although it is headquartered  in the UK.

“We supply components or complete systems to pretty much every car maker in the world,” Rickell said.

”The cycle times for carbon fibre still aren’t fast enough to meet the 500,000 components  per year rates needed in the automotive sector. In high-strength steel, you can make components  in seconds

In recent years, the automotive sector has seen some changes for GKN. “What we’re very proud of  in the last few years is [not only] that we have really moved from being a mechanical engineering company, supplying about half of all the constant-velocity joints of all the cars in the world – which  is quite an achievement, of course – but we’ve now grown much more into an automotive company supplying complete all-wheel drives and hybrid and electric systems.

“Across all the divisions – automotive aerospace and land systems, which is systems such  as agricultural but also buses – the move into hybridisation is  very important.”

Propulsion is a novel area  for the company, according to Rickell. Previously, GKN’s powder metallurgy division –  which is  its lead for additive manufacture processes – provided some components  for internal combustion engines (ICEs), but the Driveline division had always been more involved with the drivetrain downstream of the engine. What changed all that  was the advent of hybridisation.

“This is an area that’s actively looking for different solutions to the ones that were on the market,” Rickell said. “For us, that meant the development of electric axles in one- and two-speed options, and what we call our e-axle solution where you have a conventional engine driving the front or rear axle and are looking for an electric axle to drive the other wheels. This is becoming an increasingly important subdivision of the all-wheel-drive segment, which is itself becoming much more important.”

For most of its existence, four-wheel-drive (or all-wheel-drive – AWD – as GKN prefers to call it) has been a rather niche area for automotive, limited to speciality vehicles such  as off-roaders and agricultural vehicles. Its rise in popularity  has coincided with the launch  of premium-positioned sports utility vehicles (SUVs). As AWD conventionally needs big, powerful engines, it is  often seen as a ‘problem’ part for today’s automotive sector, with the cliché  of the fuel-guzzling, fume-spouting ‘Chelsea Tractor’ cluttering up  the streets and making everyone in the vicinity choke.

But hybridisation is changing all that, Rickell explained. GKN’s e-axle technology, which it pioneered on Porsche’s 918 supercar and BMW’s i8 hybrid saloon, is designed to give vehicles AWD capability while minimising emissions.

E-axle vehicles have electric motors on the axles that the  ICE doesn’t drive. “The control strategy and software, which we also developed ourselves, gives you the optimum option for the situation,” Rickell said. “When you’re setting off, it’ll often just engage the e-axle, because the electric motor has good torque  at low revolutions per minute.  But if you accelerate hard, then  the ICE will cut in; if you’re driving in slippery road conditions you’ll have both systems together for the handling.”

But in the city, the system comes into its own and could banish the Chelsea Tractor stereotype for good. “In normal driving conditions, you’d probably use all-electric mode, and if you’re in the city where pollution and particulates are an issue you can set it to drive purely on electric. That’s one of the options on the dash. Those sorts of options give you the best of all worlds; handling, safety and zero emissions.”

Development on such systems is normally in close co-operation with the vehicle manufacturer. “The best systems are always collaborative. With Porsche 918, we were the preferred technology partners; similarly with the BMW i8,” Rickell said.

The systems have some common components, such  as actuators, electronics and control software, but GKN is not developing an off-the-shelf system for manufacturers to drop into cheaper cars. “We have to be cost competitive, especially as you go into higher volumes. But we have to be clear that this sort of intelligent tech, with the control strategies you need, is fairly high-tech, so it is going to add value to the vehicle. We have a project with Peugeot and Citroën with an e-axle on the back of a mid-range front-wheel-drive model. Front-wheel drive is the most cost-effective way to build a volume car these days, but there are also more rear-wheel-drive platforms coming through.”

Car makers are keen to adopt this technology because it helps keep their ranges broad, Rickell explained. “It allows them to have vehicles with higher carrying capacity, larger vehicles and  more sporty vehicles, but still  have the emissions profile to  meet regulations. It’s a solution they need to maintain their range.”

”We have to be cost competitive; but we have to be clear that this sort of intelligent technology, with the control strategies you need, is fairly high-tech, so it is going to add value to the vehicle

One technology Rickell is particularly proud of is the two-speed e-axle on the Porsche 918 and BMW i8.

“Normally, electric drives disconnect between 120km/hr  and 150km/hr, but the two-speed system allows it to be used all the way up to motorway speed. It’s done with a transmission using a lightweight synchroniser, not a dual clutch; any gaps in the torque are filled using the ICE so it’s very smooth,” he said. “The driver can’t feel the shift.”

GKN is also looking at lightweight materials, where  there is commonality between  its automotive and aerospace divisions. “Automotive is the largest part of our business  and it’s very important to us; about half of what we do is in automotive. But 30 per cent is in aerospace: we’re the world-leading supplier for carbon-fibre components for aircraft and we supply all the major companies. We’re proud  of that because we can meet  the requirements of that sector  in structures and aero engines.”

In the automotive sector, lightweighting for GKN centres around high-strength steels and pressure die-cast aluminium; magnesium is making inroads in the sector at the high end  for thin-walled housings, but aluminium is still preferred, Rickell said. “For carbon-fibre, the cycle times still aren’t fast enough to meet the 500,000 components  per year rates needed in the automotive sector,” he said. “In high-strength steel, you can make high-strength steel components  in seconds. You need to spend money and invest in a transfer press, but for high volumes that investment makes sense.”

In the meantime, GKN is still trying to boost its profile. “We  have worked with one or two key universities; we’re also actively involved in sponsoring Formula Student, which we see as an excellent way of demonstrating our technologies and working closely with final-year students  – we’d like to do even more,” Rickell said.

“We’d probably not be able  to visit every university, but  we’d like to do more with the  key universities for automotive and aerospace, such as Cranfield, Warwick and Bath, and one or two others with regards to materials tech and additive manufacturing.”

Torque vectoring: Taking on the arctic with GKN