Speed is united with metrology

Red Bull Racing is finding new ways to turn measurement to its advantage.

It’s probably fair to say that few people would associate metrology with speed. Even the age-old proverb ‘measure twice, cut once’ carries the implication that the measurement part of the equation is the time-consuming bit, but that the time is vital to the job.

For the precision manufacturing industry, metrology is part of the price you pay for precision.

Knowing the dimensions of the articles you’re making is vital, and, more importantly, it’s part of what customers are paying for. 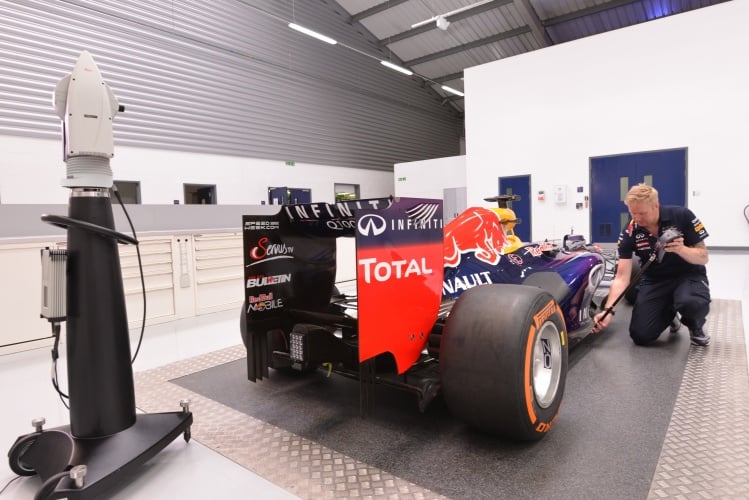 Red Bull Racing is finding new ways to turn measurement to its advantage. One of the most competitive presences on the Formula One grid, winning one in every four races it has entered in its 11-year history, it is using measurement equipment from its supplier Hexagon Manufacturing Intelligence, to help shave invaluable time off the laps its cars perform in practice and during races, and also to reduce its costs in shipping its equipment around the world.

For Formula One, metrology fulfils two functions above and beyond the need to make sure everything in the car is the right shape and size to fit together. First, it’s part of the rules: the dimensions of the cars are specified by the sport’s governing body, the FIA, and need to be ascertained and confirmed before each race. Second, its part of the competitive advantage; the set-up of the car, including details such as ride height and the position of the aerodynamic components of the car are determined to suit both the individual styles of the team’s drivers and the demands of each circuit. 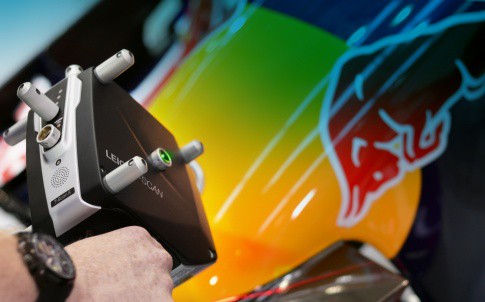 Hexagon chief executive Norbert Hanke said Red Bull is his company’s most demanding client because of its need for speed. It uses 100 per cent dimensional verification for every component it makes or buys in to go onto its cars; and it can’t hang around. During a typical season, over 30,000 changes are made to the Grand Prix car, most of which involve the design and fabrication of new parts. The effect of each change is tiny, but over the course of the season the cumulative effect amounts to several seconds off lap times: the equivalent of podium places, points in the drivers’ and constructors’ championships and sometimes even between winning and losing.

These changes have to be completed in the time between races: in other words, within a fortnight. “Working nights and weekends becomes the rule,” said Chris Charnley, quality manager at Red Bull Technology, the manufacturing and design part of the Infiniti Red Bull organisation. Incorporating the metrology into this extremely rapid design-and-manufacture cycle drives innovation at Hexagon. “Red Bull is constantly pushing the limits of the capabilities of our products and demanding new functionality,” said Hanke.

In the factory, Red Bull uses four laser trackers from Hexagon subsidiary Leica Geosystems to check the dimensional integrity of its components.

But Red Bull’s use of metrology equipment continues at the circuit. A portable AT960 Leica Absolute Tracker is an essential piece of equipment in the pit-lane garage where the cars are prepared to go out onto the circuit. It helps the team both to verify the dimensional aspects of the car that are necessary for FIA compliance, and also to complete the set-up of the car. “Conventionally, we’d machine special tooling to help us do the set-up and jigs to check it, and then we’d have to ship them to each race with our garage equipment,” said Charnley. “Using the Tracker instead, we only have to ship the one piece of equipment which has several functions, rather than several things that only do one job, and we pay by weight for shipping, so it helps reduce our bill.” It also, incidentally, shaves a small amount off the team’s carbon emissions profile, he added.

Setting-up using the Tracker rather than jigs does not add any time to the process, added Alan Peasland, Red Bull’s head of technical partnerships. “In a fast-moving industry, things that are slower tend not to happen,” he said. “We use this equipment to speed up the process and give us confidence in the results.”