The Range Rover P400e is a new plug-in hybrid model boasts 404PS and a usable electric-only range. So how does it compare?

Nobody could have predicted just how influential the Range Rover would go on to become when the original three-door model was launched in June 1970. It brought off-roaders out of the farmyard and onto the high street – paving the way for the hordes of SUVs and crossovers that now dominate the global car market.

Like many iconic cars, its shape was in fact penned by an engineer rather than a stylist. But that didn’t stop Spen King’s original concept being exhibited in the Louvre, alongside the Mona Lisa and the Venus de Milo. The fact the silhouette has changed so little in the intervening half a century is testament to its inherent rightness.

Under the skin, things have changed rather more radically. The current generation Range Rover was the first SUV in the world to feature an all-aluminium monocoque construction when it debuted in 2012. It was the most extensive finite element analysis project that Jaguar Land Rover had ever undertaken at the time – subject to a staggering 1,000 CPU years of processor time. The end result was a structure 39 per cent lighter than the steel equivalent, contributing to an overall weight saving of up to 420kg (depending on the market and specification). One of the other major changes brings us on to the car you see here, the Range Rover P400e plug-in hybrid. Strictly speaking, this is not the first hybrid powertrain to appear in a Range Rover – that honour goes to the previous diesel-electric Range Rover Hybrid launched back in 2013. But it is the only one you can buy now, not to mention the first to feature a plug-in capability and a meaningful electric-only range.

Flip up the iconic clamshell bonnet and you’ll find the smallest engine ever fitted to a Range Rover – the 2-litre four-cylinder Ingenium petrol unit now found in everything from the Jaguar F-Type to the Land Rover Discovery. It features high-pressure direct injection, a variable lift system on the intake valves that allows the throttle to be left open most of the time, and a twin-scroll turbocharger, which uses ball bearings to improve efficiency and transient response. The end result is 300PS (296bhp) from just 1,997cc. But that’s just half the story. Mounted on the ZF 8-speed gearbox there’s an 85kW (116PS) electric motor, capable of powering all four wheels. Due to the different characteristics of the two powerplants, you can’t quite add up their individual outputs, but the combined total is still an impressive 404PS (398bhp) and 640Nm (472lbft) of torque. More to point, it means the P400e officially returns 101mpg and emits just 64 g/km of CO2 on the NEDC cycle.

Of course, as with any hybrid, these laboratory figures bear scant resemblance to the real world. We saw a rather less eco-friendly 21mpg on our drive through the Cotswolds. Admittedly, it was driven with considerable gusto.

Does that defeat the object of a hybrid powertrain, then? Not at all. For a start, Land Rover claims an all-electric range of 31 miles on the NEDC cycle. We didn’t have a chance to put that to the test, but we’re told well over 20 miles is achievable in the real world, which means the average British commute could potentially be done on little or no petrol – particularly if there are recharging stations at both ends. For fleet operators, company car drivers and city dwellers there are also numerous financial benefits associated with its on-paper figures. These include significant tax incentives and exemption from the London Congestion Charge.

There are other benefits, too. With both powerplants working in unison, the 2.5-tonne Range Rover feels every bit as rapid as its 6.4 second 0-to-60mph time would imply. In fact, it’s second only to the supercharged 5.5-litre V8 in the line-up. What’s more, the electric motor adds vast reserves of easily modulated torque right from zero rpm, which makes this particular Range Rover even more formidable off-road. 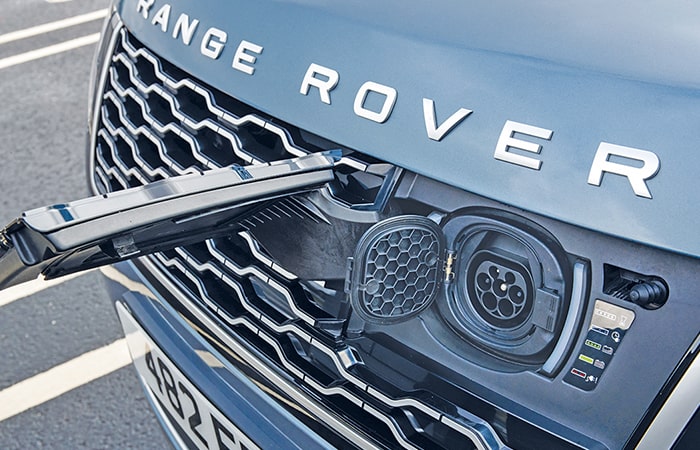 Truth be told, however, it’s not the Range Rover’s performance or its off-road ability that has given the model such enduring appeal; it’s the fact it’s also a world-class limousine. Here, too, the electric motor helps. At least up to a point.

The good bits first: Electric-only mode brings a level of serenity to the cabin that even the very best combustion engines would struggle to match. And despite the electric motor’s modest power output there’s enough torque to make effortless progress. It’s an ideal fit with the Range Rover’s luxury remit. The downside is that the petrol engine is quite keen to cut in once you switch to hybrid mode. By four-cylinder standards it’s a fine effort, but it simply doesn’t sound as cultured as the larger V6s and V8s in the range. Somewhat curiously, the addition of the hybrid system also seems to have added a slightly crashy edge to the ride (it’s not entirely clear why this has happened, because although it’s some 250kg heavier than the petrol V6, the P400e is only a few kilos heavier than the V8, which glides along beautifully). In the grand scheme of things these are both relatively minor niggles, but at this price point – £105,865 as tested – you’d be forgiven for being picky.

Inside, there’s the same brilliantly executed cabin as you’ll find in the rest of the range – now featuring a vastly improved infotainment system first seen in the Range Rover Velar. The twin 10-inch touchscreens are intuitive to use and great to look at, plus there’s an excellent voice control function co-developed with Nuance. There’s also one of the best head-up display units we’ve tested, a plethora of connectivity options and all the latest driver assistance functions.

Land Rover likens the infotainment system to a ‘digital butler’, waiting on your every need. And some of its most interesting work takes place behind the scenes. In hybrid mode, for instance, the navigation system can analyse the roads and the GPS altitude data for your chosen route and plan the most effective energy management strategy. It can also learn your preferred routes to work and check real-time traffic information to deduce the best option for that particular morning. Likewise, if you’re running late for a meeting it can send ETA updates to your fellow attendees and if you’re on the way to the airport it can alert you if your flight has been delayed.

Whether or not you choose to pay a premium for the plug-in hybrid will depend very much on your requirements. For business owners and company car drivers the P400e may well be the default choice within the range. Likewise, for those who can carry out a reasonable number of journeys in electric-only mode it offers a compelling proposition. Ultimately, though, the conventional models remain that little bit more polished – at least for the time being.