It's hard to believe that the BMW i8 has been with us for five years now. The basic design has remained largely unchanged since it debuted at the Frankfurt Motor Show in 2013. And yet it still looks like something that has teleported in from the future, complete with its concept car looks and those wonderfully flamboyant butterfly doors. 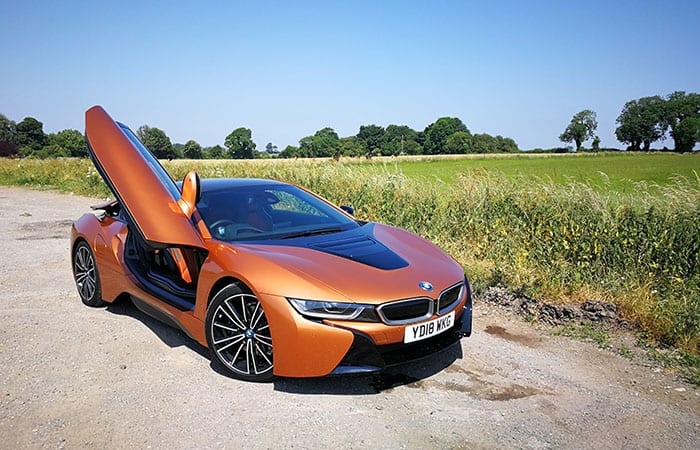 It’s not just a styling exercise, either. Underneath the lightweight (plastic and aluminium) panels, there’s a carbon fibre monocoque, which is mass-produced using a resin transfer moulding (RTM) process. The result is an immensely rigid structure that’s half the weight of steel and 30 per cent lighter than aluminium.

Power comes from a heavily turbocharged, three-cylinder petrol engine combined with a 105kW hybrid-synchronous electric motor. The internal combustion half of that package is based on the engine used in the MINI Cooper and the BMW 2 Series Active Tourer. Built at the Hams Hall engine plant near Birmingham, it squeezes 231bhp from just 1.5 litres. This is fed to the rear wheels via a conventional six-speed automatic gearbox, but that’s only half the story. On the front end there’s a self-contained ‘eAxle’ produced by GKN, which combines the electric motor with a differential and a two-speed synchro-shift transmission. This extends the motor’s speed and load range, allowing it to work right up to the i8’s electronically-limited top speed of 155mph. Combined, the two halves of the powertrain produce 374bhp; enough to propel the 1,535kg i8 from 0 to 62mph in 4.4 seconds. 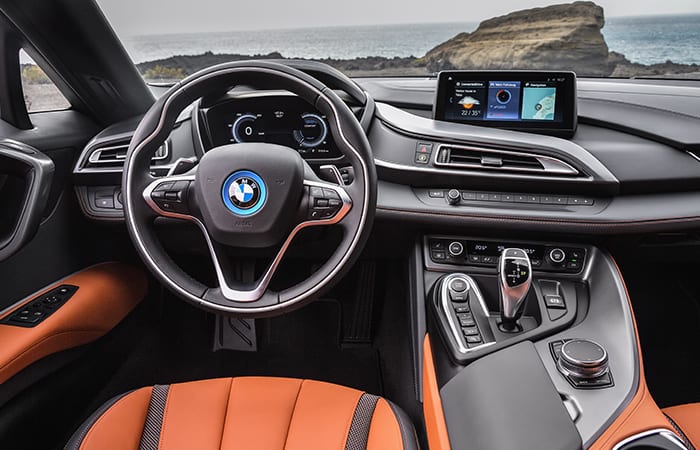 Flick the cleverly concealed handles and the doors sweep up and outwards to reveal a cabin that’s unmistakably BMW. There’s plenty in here a 1 Series driver would recognise. But slide over the broad carbon fibre sills and it instantly becomes clear that you’re in something far more exotic. The view out of the front is sheer supercar theatre, with a low, wide dashboard that stretches out beneath a steeply raked windscreen. The view in the side mirrors is dominated by the big rear flanks and the deep ‘stream flow’ channels in the C-pillars, which are designed to sweep the air around the sides of the vehicle, reducing its wake. There’s also a fully flat underfloor, ‘air curtain’ vents that divert the air flow away from the rotating wheels and active air vents that open or close to reduce drag. All this adds up to a drag coefficient of just 0.26.

All-electric mode whisks you along on a near-silent wave of torque. Even without the internal combustion engine’s assistance, the i8 feels sprightly, pulling away at something close to hot hatch pace.

Earlier this year, the design underwent a mild refresh, which saw the cell capacity increased from 20 to 34Ah, raising the battery pack’s gross energy capacity from 7.1 to 11.6kWh (9.4kWh net capacity).  This also allowed BMW to increase the motor’s output from 96 to 105kW. According to the official figures, the new battery is good for just under 35 miles range, which equates to around 20 miles in real-world driving.

The eAxle’s two-speed transmission is genuinely seamless, while the only noise is a distant whistle, which deepens in pitch when the regenerative braking kicks in. In fact, so quiet is the i8 in this mode that you start to notice sounds of the outside world, like snippets of conversation when you drive down a busy high street and the chatter of distant lawnmowers. It’s all rather serene. So much so that BMW now offers an optional pedestrian alert system, which synthesises a turbine-like sound (similar to vehicle wind noise) at speeds of up to 19mph.

Switch to Sport mode, however, and they will certainly hear you coming. The actual transition is remarkably hard to spot, but as you accelerate harder you become aware of the combustion engine’s presence. It has a gruff, raspy note, which sounds great from inside or outside the car. True, the little three-cylinder engine can’t quite match the aural drama of a Porsche 911’s flat six or an Audi R8’s howling V10 – and you can pick out the tell-tale warble of a stereo-enhanced engine note if you listen closely. But it is a genuinely satisfying soundtrack. The blipped down changes from the six-speed gearbox are a particularly nice touch. 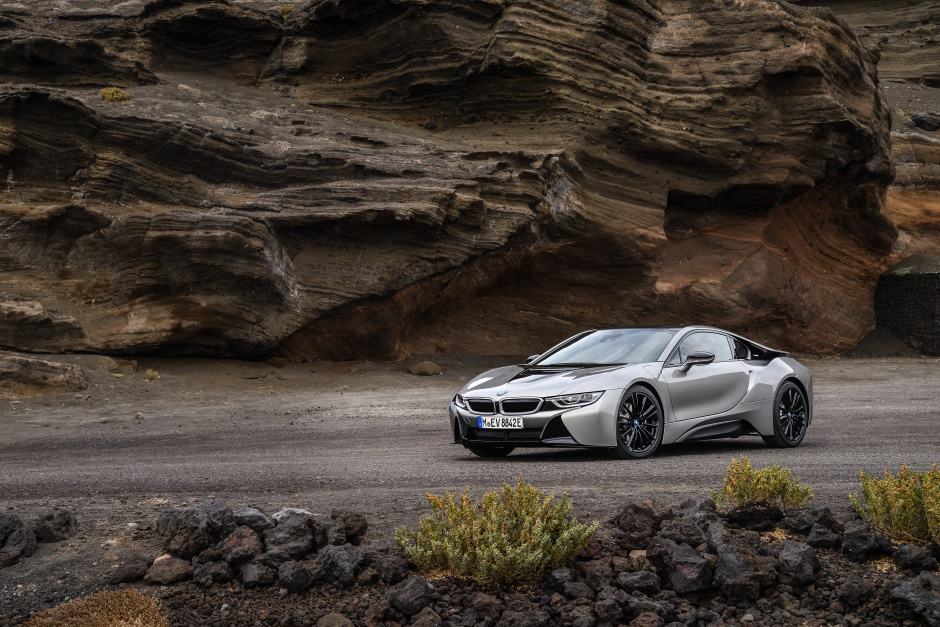 It’s fast, too. Perhaps not as savagely quick as the supercar styling might lead you to expect, but firmly into Porsche 911 or Jaguar F-Type territory. What’s more impressive, though, is the way that performance is delivered. Despite running a hefty 2.0 bar of boost pressure, the engine shows absolutely no signs of turbo lag at all; any that may actually exist is simply brushed aside by the instant torque of the electric motor.

The i8’s battery pack runs down the spine of the chassis, where the transmission tunnel would sit on a conventional design. This mounting position allows the cells to be placed right down on the floor, resulting in a very low centre of gravity. The upshot of this is that the i8 attacks corners with real tenacity. On entry to a bend, the torque split is biased towards the rear wheels to improve turn in, while, on exit, the electric motor is used to provide additional traction.

In fact, there’s never really any point where you feel the i8 has been compromised by its hybrid layout. There are occasional hints – the brake feel, for instance, still isn’t quite as good as a traditional setup – but generally the two powertrains add rather than detract from the experience. In particular, you notice its dual personality as the i8 glides effortlessly from baby supercar to luxury tourer. It’s even a refreshingly simple experience, with just three principle drive modes (Comfort, Sport and Eco Pro) and mercifully few other options to select.

So, how does it stack up as a real-world proposition? Well, driven enthusiastically, the i8 returns around 30mpg. That might not sound like much compared with the official NEDC figure of 134.5mpg, but bear in mind that some of its more traditional V8-engined competitors would be down into the teens under similar circumstances. What it loses to these cars when it comes to visceral thrills it arguably claws back in terms of refinement, cruising ability and sheer sense of occasion. Half a decade on from its launch, the BMW i8 still feels like a glimpse into the future.