The two silver badges perched on the tail of the Alpina D5 S speak volumes. Firstly, they signify that the depth of engineering that goes into this 171 mph super saloon is such that BMW is happy for the small independent manufacturer to badge these cars as its own. Secondly – and perhaps to some people’s surprise – the ‘D’ signifies that this formidable machine drinks diesel.

We’ll get on to the driving experience in a minute, but first it’s worth pausing to look at how these cars are built. Alpina, as we know it today, began life in 1965 when the owner of a typewriter company started producing revised cylinder heads and carburettors for the BMW 1500 saloon. BMW was so impressed with the quality of these conversions that it granted the vehicles a full manufacturer warranty. It was the start of a unique relationship that endures to this day.

Alpina has its own factory in the town of Buchloe, around an hour to the west of Munich. It’s here that the final assembly is carried out on the firm’s model range, which spans from the 3-Series derived D3 to the mighty B7 Biturbo, based on the 7-Series limo. It’s also home to a substantial R&D centre, including climate chambers and an emissions laboratory. Alpina uses these facilities develop its own models, as well as carrying out consultancy work for BMW.

The story of the D5 S, however, begins on the BMW production line at Dingolfing. Each of the cars is assigned an Alpina-specific build code right from the start. The company supplies a comprehensive kit of new and revised parts that is fitted by the BMW technicians as it progresses down the line. Part-way through the build, however, the vehicle is shipped to Buchloe, for the remainder of its assembly.

The full list of modifications is too numerous to list. Unlike Alpina’s petrol models, the internal components of the D5 S engine are unchanged, but virtually every other part of the powertrain is revised in some way, starting with a bespoke pair of sequential turbochargers. Next comes a heavily modified cooling pack, followed by new intake and exhaust systems.

Such is the level of detail here that Alpina has developed its own specifications for the diesel particulate filter (DPF) and the selective catalyst reduction (SCR) system. Naturally, the ECU calibration has been thoroughly reworked too. The result is 326 bhp – a healthy 65 bhp increase over the BMW 530d, on which the D5 S is based. More to the point, though, it now produces 700 Nm of torque. That’s more than a Lamborghini Aventador.

The engine quietly spins into life and settles into an inoffensive idle that sounds much like any other premium diesel. Shift the ZF-sourced 8-speed automatic into Drive, however, and things get a lot more interesting. Cruising around at light loads, it emits a gentle burble, somewhere in between a petrol V8 and a Riva speedboat. But put your foot to the boards and it hardens into growl that lasts all the way to the 5,500 rpm red line.

Alpina UK expects to sell around 12 of these cars in 2018, which means you have roughly the same odds of spotting a Bugatti Veyron

Before we get too carried away it’s worth stating that there are fleeting moments – particularly at low rpm – when you can still sense that it’s a diesel. Listen very carefully and you can also detect a faintly synthetic edge to the soundtrack, which betrays the presence of a noise enhancement system. This uses a microphone placed in the intake to sample the engine’s natural tones and then boosts the more favourable frequencies with constructive interference piped through the stereo. That might sound a bit contrived, but this principle is applied on virtually every modern performance car and this is one of the more subtle examples we’ve come across. Nonetheless there is still a tell-tale warble if you listen carefully.

The bottom line, however, is that this diesel unit sounds, revs and responds better than a lot of modern petrol engines. Its appetite for revs is particularly uncanny. Alpina actually limits the torque at low rpm to give the engine a more progressive character – much like Ferrari does with its turbocharged petrol engines. The end result is a torque curve so unswervingly linear that it might as well have been drawn with a ruler.

The D5 S makes an effortlessly refined motorway cruiser, capable of around 45 mpg when driven with restraint. But it’s out here on the sinewy roads of the Yorkshire Dales that the chassis really has a chance to shine. Suddenly, this near-two tonne saloon miraculously shrinks around you, flowing down the road with impressive agility and precision. In fact, the only real reminder of its considerable size is the sharp intake of breath that accompanies the appearance of oncoming traffic on these narrow moorland roads. 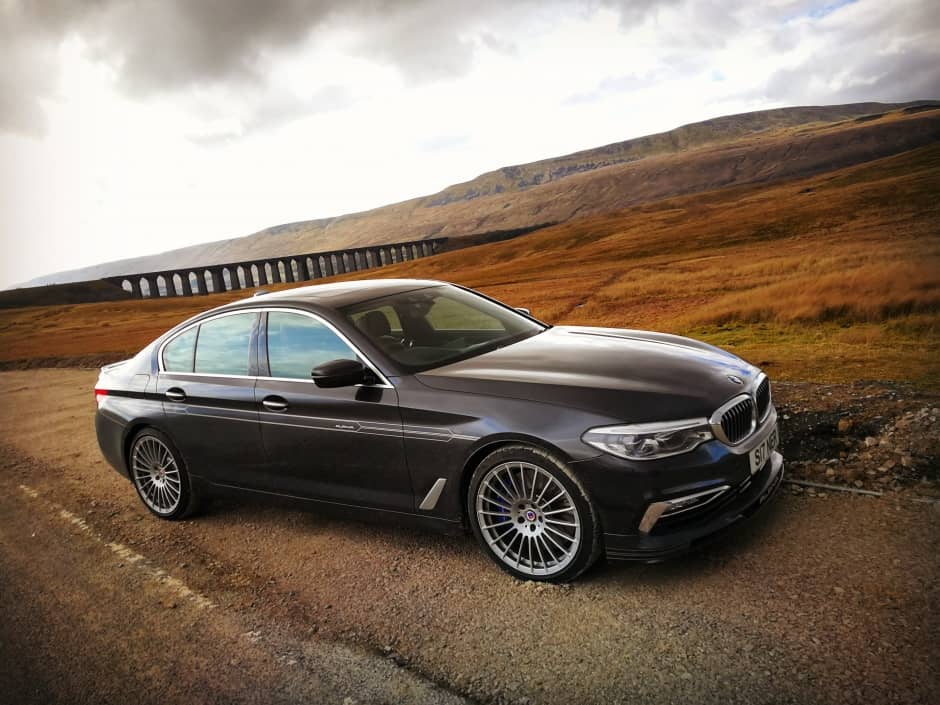 A lot of work has gone into the Alpina’s astonishing blend of comfort and agility. The springs are some 40 per cent stiffer than their BMW equivalents, yet the electronically-controlled dampers are nominally softer in compression and firmer in rebound. The bushes and top mounts have also been re-engineered, while the 20-spoke forged alloy wheels shed around 15 kg of unsprung mass compared to normal cast items.

In the softest Comfort Plus setting the Alpina actually makes a more relaxed limo the standard BMW, despite offering a much sharper, sportier drive in the more aggressive settings. It’s the perfect combination of Dr Jekyll and Mr Hyde.

This particular D5 S comes with a modified version of BMW’s hydraulically-controlled anti-roll system, dubbed Adaptive Drive. It’s similar in principle to a passive anti-roll bar, but it is automatically adjusted front and rear to adapt to different drive modes and changing road conditions. The same options pack also brings rear-wheel steering. At low speeds, this steers the rear wheels in the opposite direction to the fronts by up to 2.5 degrees to improve agility. At high speeds, meanwhile, both sets are steered in the same direction for increased stability.

Alpina has sprinkled its magic on the drivetrain too. All-wheel drive is standard on the D5 S, but the BMW xDrive system has been recalibrated for a more pronounced rear-bias.  It never feels wild in the same way as a Mercedes-AMG E63 or indeed BMW’s own M5, but the changes are enough to make it feel noticeably rear-driven when you’re in the mood. At the same time, there’s almost limitless traction when you want it, even with all that torque to contend with.

The icing on the cake is the driving environment, which feels wonderfully bespoke, despite amounting to little more than a re-trim. In fact, that’s quite a good metaphor for the D5 S as a whole. Most of the changes are incremental, but they add up to a car that feels genuinely special and a great deal more than the sum of its parts.

In that context, the D5 S’s starting price of £62,000 is not at all unreasonable (you can spec a normal 530d to more than that if you try). Even our generously equipped test car – optioned to £86,690 – feels special enough to justify the premium. And it’s certainly exclusive. Alpina UK expects to sell around 12 of these cars in 2018, which means you have roughly the same odds of spotting a Bugatti Veyron. Unlike the Bugatti, however, the D5 S can be supplied with the badges and decals removed at no extra cost, meaning that most people would have no idea what a remarkable vehicle lies underneath. And that, we suspect, is just how Alpina buyers like it.