Torque vectoring: Taking on the arctic with GKN 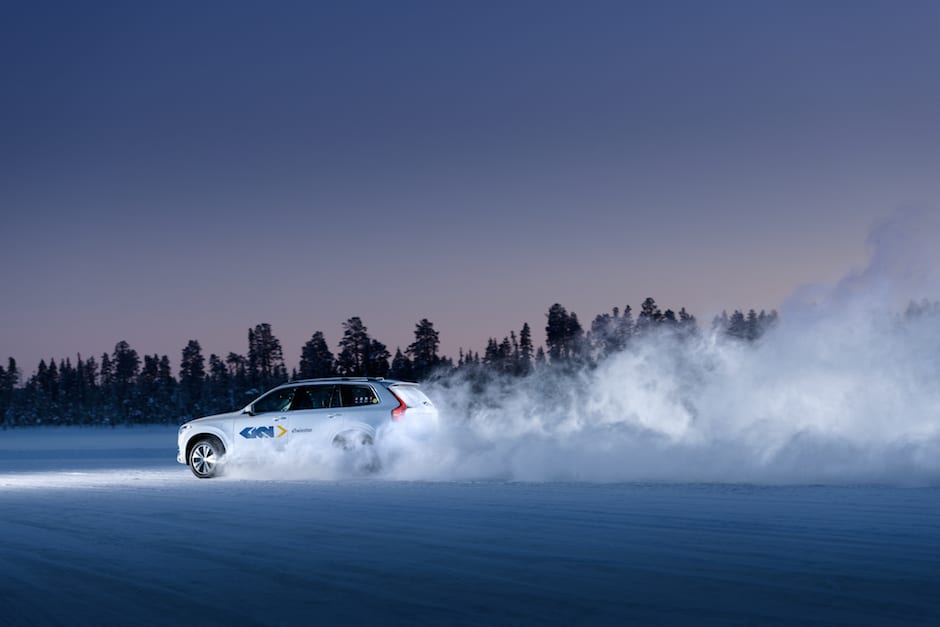 You can almost sense the impending accident in the stillness of the Arctic air. Two-and-a-half tonnes of Volvo XC90 is bearing down on a perilous 90-degree corner, covered in sheet ice. The surface has a light dusting of snow and glassy blue patches where it has been scraped bare.

And yet, somehow, the inevitable crunch never comes. Instead, the nose of the car tucks obediently into the bend and the driver floors the throttle to ride out a long, lurid slide.

It soon becomes apparent that he’s doing it on purpose. Not very relevant to everyday driving you might argue, but the car in question is one of GKN Driveline’s fleet of technology demonstrators. And the important thing here is that it’s bending physics in a way that a vehicle of this size simply shouldn’t be able to do.

As with the production Volvo XC90 T8, on which this prototype is based, the combustion engine powers the front wheels alone, with drive to the rear coming from an electric motor. The key difference here is that the standard rear drive unit has been replaced by a GKN eTwinster system, which uses a pair of active clutch packs to distribute the torque in place of a differential.

Next, it’s our turn. Having previously been out in the standard car the difference is night and day. The big Volvo reacts crisply to even the smallest of control inputs, with noticeably less steering lock required. Absurd as this sounds, there’s a hint of Lotus Elise to the leviathan’s responses.

As our guide so willingly displayed, the car’s angle of attack is now far more sensitive to the throttle. The same principle applies when you lift off, with the regenerative braking effect split through the clutches to control the car’s attitude; too much understeer or oversteer and the system will adjust to compensate. What’s more, because it reacts in around 100 milliseconds, the Twinster unit can apply an aggressive initial response to bring the car back into line, followed by a gentle yaw-damping effect to prevent things from going too far. It’s the ultimate form of automotive flattery.

The calibration settings on this demonstrator vehicle have been tweaked to allow a degree of showboating, but the fundamental effects would be just as relevant in normal conditions. The same freakish levels of agility would be beneficial every time you went to thread the car down a winding country lane, while the greatly improved stability could be a potential life-saver in emergencies.

GKN has been developing the Twinster technology for some time now, with the electrified eTwinster first previewed in 2016. The core technology has been evolving ever since, though. In particular, the company recently introduced the eTwinsterX. This uses a two-speed seamless shift transmission to extend the electric axle’s speed range up to a theoretical 155mph (250 kph). Above that, the electric motor disconnects and the vehicle can continue in two-wheel drive mode.

We won’t be going that fast today, but it’s back onto Sweden’s frozen lakes of Arjeplog to sample GKN’s 2018 Technology Demonstrator (or GTD18 for short). Based on a Mercedes GLA 45 AMG, it does away with the production car’s mechanical all-wheel system. Instead, like the Volvo, it becomes a ‘through the road’ hybrid, with an eTwinsterX unit on the rear. What makes the GTD18 particularly intriguing, however, is the fact it also has a Twinster unit fitted to the gearbox at the front, splitting the torque from the combustion engine across the axle. That means, at the touch of a button, it can be driven in front-wheel drive, rear-wheel drive or four-wheel drive configurations with an infinite torque split across all four wheels. And that gives it some rather unique abilities.

Its first trick is familiar. By adjusting the degree of torque vectoring, the GKN engineer next to me can make the car feel noticeably more agile from one slalom run to the next. Again, there’s a serious point here. You reach a stage where the Twinster-equipped configuration will swerve around the obstacles and the regular setup will not.

Next, we switch to electric-only mode. Because the front Twinster system allows the combustion engine to be decoupled completely, GKN says it could add up to 15 per cent to a hybrid vehicle’s zero emissions range.

Under our low-speed conditions of our test, it makes for quite a potent driving experience – not to mention an entertaining one with the electric motor’s 120kW (161HP) and 210Nm (155lbft) of torque sent to the rear wheels alone.

The engineers have saved the car’s party piece until last. After another tweak to the calibration, I’m invited to turn the steering onto full lock and do a U-turn. The GTD18 promptly whirls round in little more than its own length – the torque vectoring function resulting in a turning circle that would shame a London taxi. As with all these demonstrations, it’s possible that the low-grip surface is flattering the system’s abilities, but it’s still a vivid illustration of the potential benefits.

The timing is also rather apt. Hybrid and electric vehicles are the industry’s hottest topics right now and GKN is a keen advocate of the so-called P4 or through-the-road architecture. The company points out that this would enable carmakers to pursue a modular approach; by selecting different modules they would be able to scale the drivetrain up from two-wheel drive to four-wheel drive and from combustion-only to hybrid or fully electric. It also allows the electrical half of the system to operate without the driveline losses that come from mounting the electric motor on the engine (P0, P1, P2) or the transmission (P3).

The other major factor when it comes to electric and hybrid vehicles is weight. For all the talk of super-light composite materials and high energy density batteries, plug-in capability still comes with a weight penalty measured in hundreds of kilos. You can never entirely suppress physics, but GKN’s work proves that you can take a vehicle built like a moose and make it handle like a gazelle.

READ OUR IN DEPTH FEATURE ON ARCTIC WINTER TESTING HERE