Tuning in the factory

Radio frequency identification is helping to pave the way for a new era in creating bespoke products on the assembly line.

Henry Ford once said of his Model T car: ‘You can get in it any colour, as long as it is black.’ He was speaking at the turn of the 20th century when making a profit meant making products fit the mould. It was an era when customisation was out and standardisation was most definitely in.

Today, things have taken a U-turn. Factory robots and advanced software have made process lines far more flexible. As a result, customers are demanding bespoke products, and manufacturers are racing to find the best way to produce them at a low cost. Now, from aerospace to pharmaceuticals, one technology has emerged that could help do just that.

Radio frequency identification, or RFID, has been in use for decades in tasks such as inventory monitoring and the recording of maintenance histories. But as RFID increases in reliability, it could have the potential for much more. For instance, it can store information about each component to tell the rest of the factory what work has already been done, and plan for the work that still needs to be completed.

Ultimately, engineers are hoping that RFID could help create automated bespoke manufacturing operations where products are personalised on an assembly line. The technology uses radio waves to automatically track products. There are a number of ways to do this but, most commonly, data is stored in a tag. A reader then converts the radio waves reflected back from the tag into digital information that can then be passed onto computers.

Its capabilities are well known in the automotive industry, which was one of the first to make use of the technology. ‘A typical application would be on the car-body jigs that circulate through the paint shop,’ explained Mark Higham, general manager process automation at Siemens. ‘As the jig with the tag attached passes a reader, this verifies the unique ID for the body and the control system instructs the automatic spray booth to paint the car in the correct colour.’

‘Automotive production is one of the most challenging applications for RFID not just because of its complexity, but also due to its uncompromising, high-reliability requirements

General Motors has used RFID tags in its factories for more than a decade to identify assembled engines. Last year, the company began attaching them directly to the cylinder heads and engine blocks at its plant in Tonawanda, New York, using something called ‘databolts’.

These look like ordinary bolts, but their heads are hollow. The empty heads are filled with RFID tags and coiled metal filaments that work like an antenna.

Each databolt holds 2KB of data, relatively little by general computer standards but more than enough to track detailed information of each process. It can record every single manufacturing process involved in creating and testing the engine block and cylinder head. Overall, General Motors said there are around 50 different points through the production line where data is moved to and from the bolts. If an error occurs, the automated machine responsible for the mistake goes offline and is inspected by a worker.

‘Automotive production is one of the most challenging applications for RFID not just because of its complexity, but also due to its uncompromising, high-reliability requirements’, said Jarkko Miettinen, vice-president of sales at Confidex, who supplies RFID tags to Volvo. Last year, the car manufacturer rolled out passive RFID technology to track two million cars as they move through the production process at its manufacturing facilities in Belgium and China.

‘Other markets such as aerospace and pharmaceutical have adopted the technology more recently for tracking and traceability; in the case of pharmaceutical to, say, meet legislative requirements,’ said Higham. ‘The companies are obligated to trace batches through the manufacturing process and store detailed records of that “birth history”. In the case of a recall this history is used to identify all process steps and process equipment used.’

For instance, last year, Airbus adopted something it called ‘RFID Integrated Nameplates’ to improve the traceability of aircraft parts within the company. They work in the same way as a conventional nameplate with printed text but also include an RFID tag creating what the group describes as a single ‘compact, durable and lightweight hybrid device’. Technology such as this, it said, will help monitor parts both during manufacturing and in the supply chain.

An RFID system essentially consists of three elements: tags, readers and a control system. ‘Tags range from low-cost, disposable paper tags through to high-specification ruggedised tags that can withstand heat and chemical attack,’ said Higham. ‘The tag is a data-storage medium that can hold a few bytes through to kilobytes of data. They are generally attached to jigs, products, packaging within the production environment.’

The readers, meanwhile, can be static and attached to machines, conveyors and doorways. They can also be handheld. The readers ‘energise’ the tags by emitting a short-range radio frequency signal. 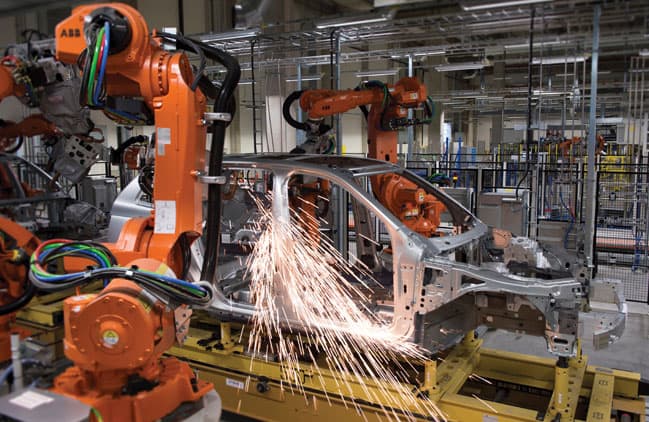 The data held on the tag is then exchanged with the reader or written to the tag to store status data. This is then passed to the control system, which acts upon the data received.

‘Barriers to the widespread adoption of the technology have historically been tag cost and customer nervousness in adopting this ‘new’ technology as there can be issues with reader consistency,’ said Higham. ‘Like any technology using wireless transmission it is susceptible to interference. However, a lot of effort goes into the design of the technology in order to minimise interference and make it as robust as possible. A correctly designed and implemented system will be very reliable and robust.’

Industrial processes have traditionally been conservative when implementing innovation, but experts believe the cost benefits of technologies such as RFID will help introduce a ‘fourth industrial revolution’ in as little as 10 to 20 years. With smart factories becoming increasingly interconnected, bespoke products created on large production lines could soon become commonplace.