The team behind the Bloodhound SSC answers your questions on the challenges of developing the world’s fastest car.

Engineering projects don’t come much more challenging than building a 1,000mph car. That’s the target set by the team at Bloodhound SSC, who hope to inspire a generation of engineers by setting a new land speed record.

With the manufacturing and assembly stage of the project reaching the halfway mark and just 12 months until the first record attempt, the Bloodhound team has taken time to answer your questions on the challenges of developing — and driving — the world’s fastest car.

What developments has the project produced that you think may have a practical use in other applications?

Ron Ayers, chief aerodynamicist: The primary benefit accruing from the Bloodhound project is the educational one and by now I believe there is plenty of evidence that this is bearing fruit, as many young people have already been enthused. The second benefit is the publicity given to the excellent (but frequently unsung) companies in our supply chain. They normally do not get much publicity as they are frequently Tier 4 or Tier 5 members of a supply chain and the commercial and security considerations of the prime contractor prevent them from receiving public acknowledgment. Working with Bloodhound enables them to proclaim to the world that they are at the top of their specialist field. We may also be pushing their technology beyond existing boundaries and this will make their products/services even more marketable. We are ourselves pushing CFD to beyond its normal limits and this technology could have benefits in other projects. 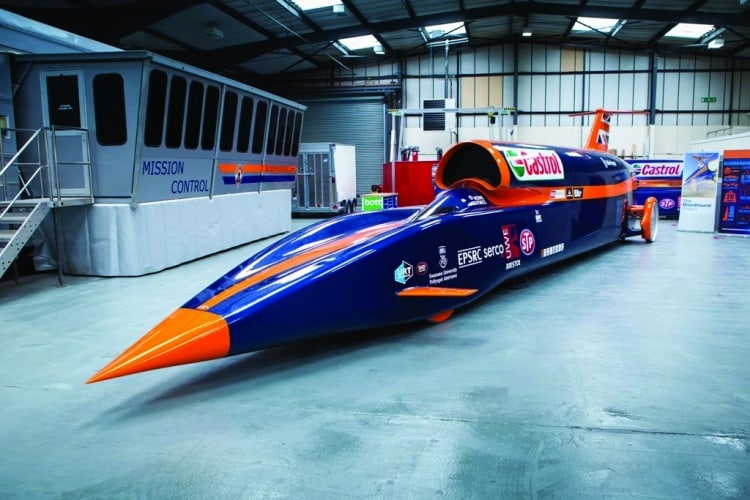 What is the environmental specification for the control and instrumentation systems?

Joe Holdsworth, systems engineer: In terms of sealing boxes and expected operational environment we try to rate everything to IP65 or above; dust ingress will probably be the biggest issue we face. It also depends where on the car the components are, for instance in the HTP Rocket Oxidiser bay we also need to make sure that materials used in there are compatible with the HTP and do not cause its decomposition should they come into contact with it.

What level of vibrations will the car produce and how do you deal with this?

RA: On Thrust SSC we had many runs aborted due to vibration affecting electrical connections and so on. Having been forewarned by this experience, all Bloodhound adaptors and connectors are specified to highest standards of vibration tolerance. Also required is the ability to cope with a wide operating temperature range and the presence of very fine dust.

What safety systems do you have on board?

Mark Elvin, lead engineer for mechanical design: We have the on-board fire extinguisher, which we have had to make sure that the foam it dispenses is High Test Peroxide (the rocket’s oxidiser) compatible. We have sensors that can detect an HTP leak with the tank bay. If we detect an HTP leak we can plug in a deionised water deluge to dilute it. The computers have parameters for load, pressure and so on set up within them, and if any of the sensors detect values in excess of the present limits the car’s systems will abort the run autonomously. 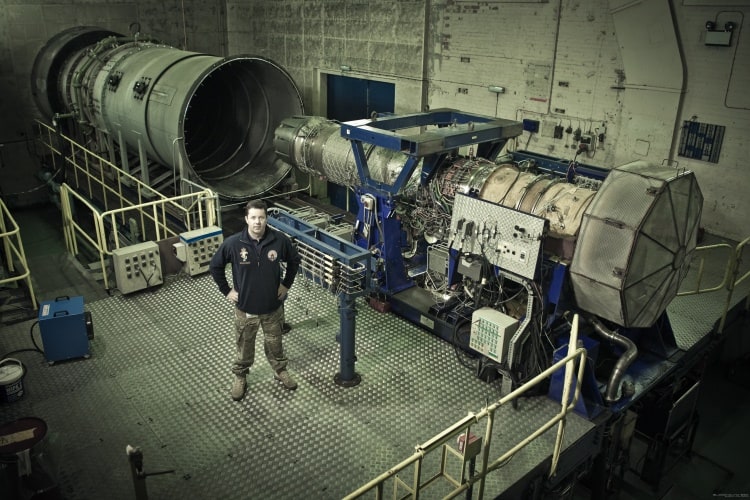 What will be the optimal weather conditions for the record attempt? Will you only run in very specific conditions or do you have ways to mitigate for non-ideal circumstances?

RA: The ideal operating environment is for cool, dry weather with minimal wind. These conditions are most often encountered soon after sunrise when the atmosphere is calm. The most likely environmental problem (apart from being rained off!) is that of cross-wind gusts. These can be quite localised, so observers will be situated along the track to warn of local ‘twisters’ and ‘dust devils’ that would not be visible from the starting line. We will set limits on these things in the light of the vehicle’s response to gusts an so in early runs.

How do you measure residual stresses building up in the car before and during testing?

RA: The early runs will be relatively slow and velocity will be increased gradually as we gain confidence. We have more than 500 instruments on board to monitor stresses, temperatures, vibrations, dynamic responses and so on. The safety-critical ones are monitored during the run, and all will be analysed between runs. Although we will start off with a specified programme of runs up to 1,000 mph, this can be modified in the light of experience. I, and other members of the engineering team, will be happy to discuss what we have learned from analysing the runs, and say how these lessons will influence the rest of the programme.

Is the Earth’s curvature a problem, and if so how do you balance down force against drag?

RA: The Earth’s curvature is not a problem. From Andy Green’s sitting position in the pilot seat, the Earth’s horizon will be a little more than two miles away (i.e. about seven or eight seconds at 1,000mph!). He will be following a straight line marked on the desert. There will also be numbered markers: the ones for Thrust SSC were about 2m tall and at half-mile intervals. These are not just for Andy’s benefit so much as for the members of the support team who must be located in known positions.

You do not balance downforce with drag. Drag acts in a horizontal direction and is overcome by jet and rocket thrust. Vertical aerodynamic forces must be kept as small as possible (at all Mach numbers — which is the difficult bit) so that gravity dominates to ensure the car has enough download on each wheel to ensure vehicle controllability. And no, the radial force due to travelling at 1,000mph over the Earth’s curvature is not significant. Calculating  the effect would be a nice problem for applied mathematics students.

How do you manage the interfaces between the driver and the car (at the seat, steering wheel and so on) to prevent slippage?

Jules Tipler, communications manager: Both the seat and steering wheel are moulded bespoke to Andy to ensure a perfect fit. The 3D Printed Titanium steering wheel grips are taken from a mould of Andy’s hands and ergonomically shaped to ensure he can reach the triggers and buttons with ease. The bucket seat is a carbon composite taken from a mould of Andy’s back and shoulders. This ensures there is a snug fit all round.

What is the surface of the track made from and how much energy is lost cutting through it?

RA: The desert is composed of dry, water-laid mud. It is very hard and easily supports the weight of the car. I estimate that the rolling resistance coefficient is about 0.08 at low speeds, but at high speeds the car will probably raise up (a bit like a hydrofoil craft does when it gets up on a plane) allowing the rolling resistance coefficient to reduce. However, no-one seems to have done this type of research before so I am working from first principles. With Thrust SSC, the car and its shock waves disturbed so much dust that it created a significant ‘spray drag’. Such a phenomenon is, of course, known to high-speed boats but TSSC is probably the first car to experience it on land. Bloodhound has been designed to minimise this effect, but time will tell whether my efforts have been justified.

How do you solve the problem of fuel sloshing back and forth during acceleration and deceleration?

RA: The fuel tanks, and the HTP tanks are fitted with internal baffles to minimise sloshing. The pumps are situated at the very lowest points in the tank to ensure they are never ‘pumping air’.

What would happen if the car hit an obstacle or a bird happened to land on the track? What measures will you have in place to prevent this?

RA: Impact with a large bird at 1,000mph could be lethal. Birds are unlikely as there is no food on the desert, and we will ensure that no food is kept on or near the desert to act as bait. Our team of gust detectors will double up as bird spotters and scarers. There will probably be a photography helicopter overhead so this should further discourage bird presence.

Have you set a date for the run yet? If so what is it?

JT: The Bloodhound Supersonic Car is currently being assembled at the Bloodhound Technical Centre in Bristol. It’s on schedule for roll-out in summer 2015 where it will undergo UK runway testing up to 200mph (321km/h) at the Aerohub, Newquay. The team will deploy to South Africa in autumn 2015 to begin high-speed testing with the target of reaching 800mph (1,287km/h). The team will return to the UK to review the data before returning to South Africa in 2016 with the aim of reaching 1,000mph (1,609km/h). 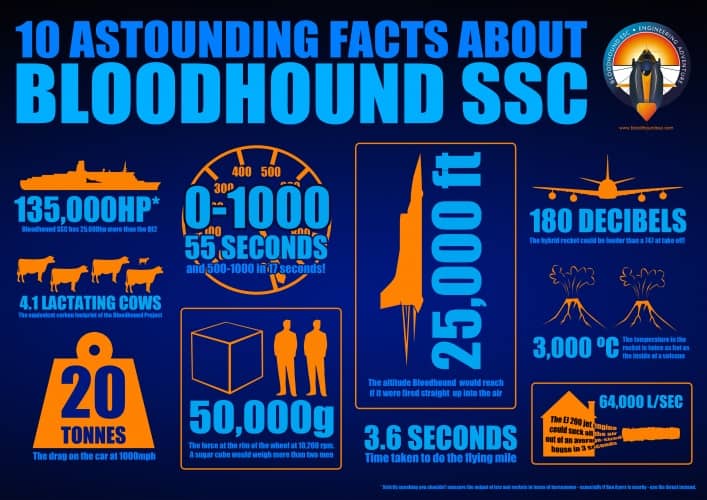