After five years of construction at six different shipyards, one of the UK’s most-challenging engineering projects is almost at an end. In just a couple of months’ time, HMS Queen Elizabeth — Britain’s first new aircraft carrier in more than 30 years — will float out of its dry dock in Rosyth, Scotland.

For the latest of our reader Q&As, we put your questions on the design and production of the new ship to BAE System’s David Downs, engineering director of the Aircraft Carrier Alliance (ACA). 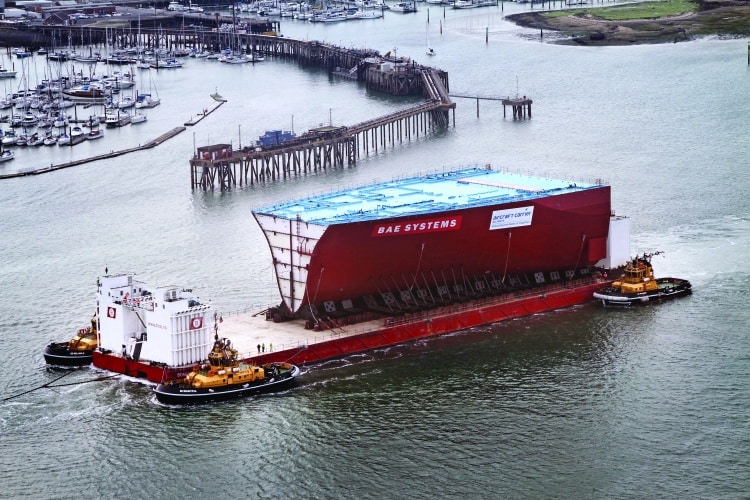 The ship was originally expected to weigh 65,000 tonnes, but is now thought to have a displacement of 70,600 tons. What caused this discrepancy?

The displacement of the Queen Elizabeth-class aircraft carriers upon delivery to the customer will be approximately 65,000 tonnes, which is the same as the predicted displacement when we started the manufacturing phase, although the design allows for weight growth in excess of 70,000 tonnes through the service life of the ship due to upgrades. 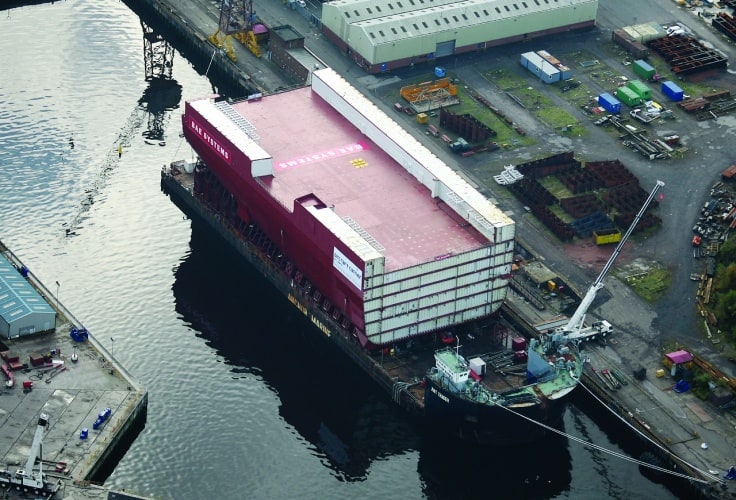 What was done to make the ship as manoeuvrable as possible? How does it compare to modern cruise liners and does it make similar use of things such as side thrusters and electric drives?

The QE-class aircraft carriers have an integrated electric propulsion system, which provides a high degree of control and manoeuvrability, but among the key design drivers for the aircraft carriers are issues such as survivability, endurance, speed and even stealth. Manoeuvrability is not as fundamental as it would be to a modern cruise liner, which would regularly need to enter congested harbours without assistance. Bow and stern thrusters are not a requirement for the QE class as the home port, HM Naval Base Portsmouth, will have the infrastructure and assistance needed for the ships to come alongside and would normally remain at sea if away from home. 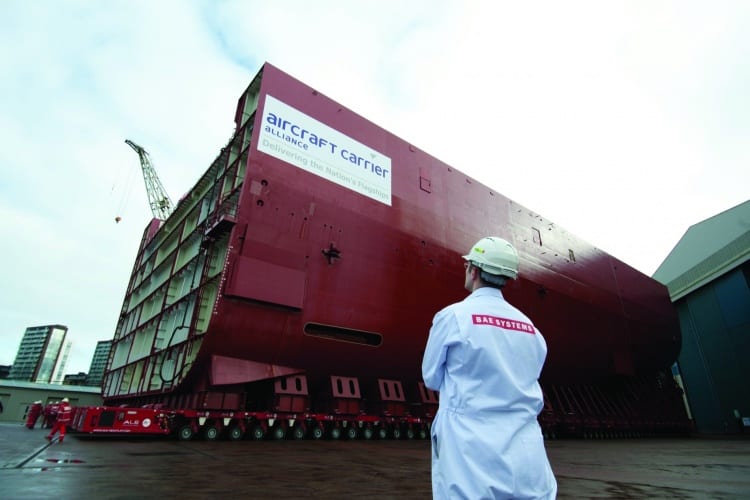 What defences does the aircraft carrier have against long-range missiles? What consideration has been given to future potential threats such as weaponised lasers? How easy would it be to adapt the carriers for changing requirements in the future, for example, by fitting arrestor gear for STOBAR operations?

The QE-class aircraft carriers have very sophisticated and capable radar systems, and other sensors for the detection of threats, but they would be deployed as part of a carrier task force and the escort vessel would take the lead for the engagement of an incoming threat, although the QE-class carriers also have their own close-in weapon system (CIWS) and small calibre guns. Like other ships in the carrier task force such as the Type 45 destroyer, the QE-class carriers are intentionally designed with the ability to be retrofitted at a later stage in their life as technology, requirements and threats evolve. 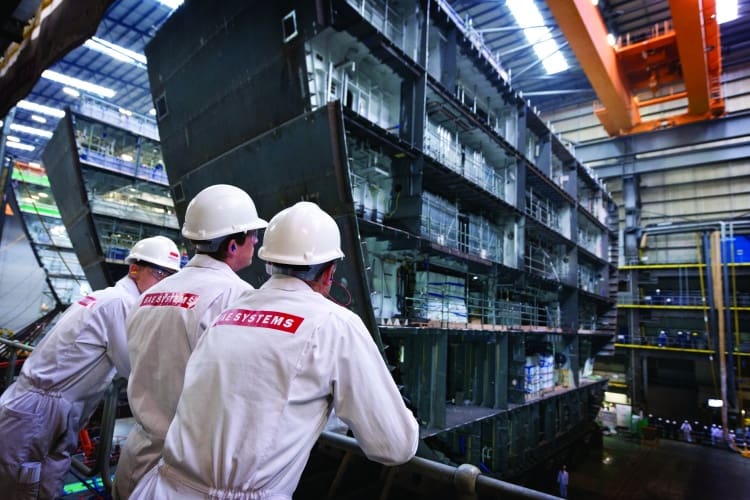 Has anything been done to enable the carrier to act as an amphibious assault unit carrying Royal Marines and their kit, perhaps including some light vehicles?

The primary role of the QE-class carriers will be carrier-enabled power projection; their size, versatility and complexity allows for a wide range of roles, which could include amphibious assault, although this is not a key design driver. New innovations and highly mechanised systems mean that the ships will require a crew of just 679, but there is the capacity, the facilities (and the bunks) for 1,600. This space would be needed when all air elements are on board, but could also accommodate personnel such as the Royal Marines or prove vital when providing humanitarian aid or disaster relief. 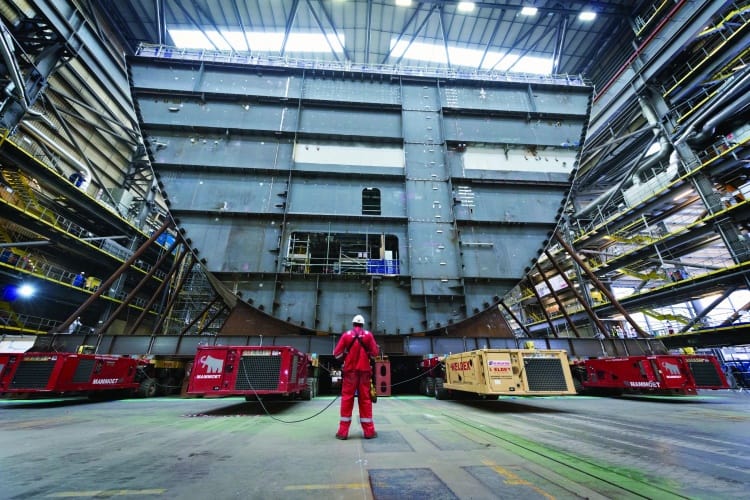 How did you manage the project across the supply chain? For example, did you use a digital mock-up i.e. a single version controlled CAD model, across all suppliers?

Yes, across the supply chain we have been using a virtual prototype of the entire ship using modern 3D CAD systems, which has proved very successful. A single version-controlled model wasn’t required, but the technology for virtual modelling has been developing fast in recent years and this has brought us significant benefits.

What innovations developed for the carrier programme could have a commercial use elsewhere and what are the partners doing to exploit these developments?

Virtual modelling is one example of technology that was exploited for the benefit of the QE-class carriers and is likely to become ever more important for the design of complex warships in the future. The way in which different companies across the UK collaborated on this from the design stage through to the build, transport, integration and eventually the delivery has also proved very successful so the Aircraft Carrier Alliance is itself an innovation when it comes to delivering large complex projects. The alliance is comprised of the Ministry of Defence, BAE Systems, Thales and Babcock, and with more than 200 direct suppliers and many more across the wider supply chain there are more than 10,000 people involved in this project.

One of The Engineer’s readers mentioned a rumour that HMS Queen Elizabeth will require some additional buoyancy to allow it to float over the caisson bases and leave the Rosyth dockyard. Is this rumour true and, if so, how will you achieve this float-out?

Although this rumour is not true, the float-out of HMS Queen Elizabeth in July following the naming ceremony is certainly going to be a quite a challenge for all involved, but this is a milestone we are really looking forward to. Buoyancy tanks were used successfully during the transportation and docking of Lower Block 04. In contrast, we’re actually going to use 4,000 tonnes of ballast water when floating the ship out of the dock.

Another good example is Platform Navigation. The QE-class carriers are incredibly complex workplaces as there are more than 3,000 compartments and virtually no windows so even routine journeys can take up to 20 minutes. We needed a navigation system for new or infrequent visitors that could work indoors where satellite navigation cannot penetrate so we created Platform Navigation by combining the deck plans with route-finding logic and installing it onto commercially available handheld devices. Platform Navigation now has the potential to be used inside other large ships and structures, both during construction and in service, and its ability to record inspections and patrols makes it suited for environments such as hospitals or underground transport networks.

Your questions answered: Rosetta and Philae