A experimental version of a 2006 Toyota Prius sedan modified by US researchers has achieved a record 100 miles per gallon.

A experimental version of a 2006 Toyota Prius sedan modified by US researchers at the National Renewable Energy Laboratory (NREL) has achieved a record 100 miles per gallon.

The plug-in version of the sedan runs the initial 60 miles mostly on battery, with the remainder achieved under engine power.

The sedan's performance more than doubles the fuel economy of a standard Prius, which is rated at 48/45mpg. Additionally, it is a five-fold improvement over the 20mpg average that passenger cars and light trucks in the US achieved in 2007.

The standard Prius runs on electricity at low speeds, then the batteries and the petrol engine share the work. The batteries recharge automatically as the car operates.

NREL researchers added several features to the plug in Prius to break the 100mpg barrier.

First, they added a plug so that the vehicles batteries could be recharged directly from a standard electrical outlet. Next, they dropped in a larger lithium-ion battery that allows the car to operate on electricity for longer trips. Finally, they incorporated a rooftop solar panel that charges the battery while the car is driving or parked outdoors, adding five miles to the vehicle's range. 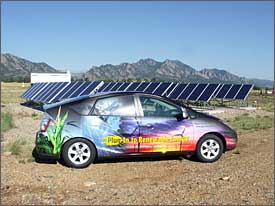 'Most people's daily commute is about 30 miles, so this car would run virtually on its battery for the entire drive,' said Tony Markel, a senior engineer with the Vehicle Systems Analysis Group.

The NREL Prius is a unique research prototype, and is not available to the public. It cost about $70,000 - the cost of the standard Prius plus $42,500 for the modifications.

The researchers say that the improved fuel economy would save more than $500 per year over the standard Prius, and potentially reduce the vehicle's greenhouse gas emissions to less than two tons per year.

In a related development, NREL has teamed up with battery-maker A123Systems to develop safe, less expensive, more powerful, and longer lasting batteries for hybrid-electric vehicles.

More miles to the gallon!