Researchers from New Hampshire’s Dartmouth College have found a way to 3D print microscopic nanorings into smart materials capable of working on a macro scale.

Described in the German Chemical Society’s Angewandte Chemie, the technique involves 3D printing gels made from mechanically interlocked molecules (MIMs) - a type of nanomachine composed of rings on a molecular axle. Nobel Prize-winning research has previously shown how MIMs can be induced into nanoscale work using various stimuli. However, imposing order on the MIMs and achieving work on a scale visible to the naked eye had not previously been possible.

“Up until now, harnessing the mechanical work of nanomachines has been extremely difficult,” said lead researcher Chenfeng Ke, assistant professor for chemistry at Dartmouth College. “We are slowly getting closer to the point that the tiny machines can operate on a scale that we can see, touch and feel.”

The team started by synthesising MIM-based hydrogels suitable for 3D printing. Lattice-like structures with cross-linked axles were printed, providing mechanical stability and structural strength. Using a solvent, the researchers were able to exert control over the molecular nanorings at the heart of the structures, changing their overall shape. 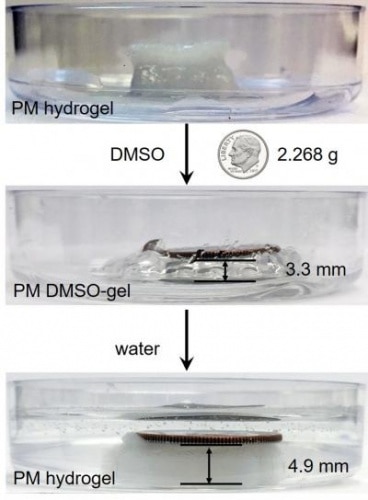 According to Ke, the printed smart material lifted a US dime weighing 2.268g. The coin, 15 times the weight of the structure that lifted it, was raised 1.6mm, which is equivalent to a human lifting a car.

"Our work provides the first design principle to add 3D printability to nanomachines,” said Ke. “Importantly, we have also transformed molecular motions to macroscale to do useful work."

"Creating nanomachine-based smart material is still extraordinarily complex and we are only just beginning, but this new technique could allow the design and fabrication of complex smart devices that are currently beyond our grasp."