BAE Systems has worked with SME UAVTEK to get a tiny UAV known as the 'Bug’ ready for action with the British Army.

Weighing in at just 196g, the battery-powered Bug is equipped with four rotors and capable of 40 minutes flight time. Its antennas can transmit images from the onboard high-res camera up to 2km, providing intelligence to units stationed back from the frontlines or the reconnaissance target. According to BAE, future updates could include listening capabilities and infrared detection, transforming the Bug into a ‘battlefield data hub’ rather than simply a reconnaissance device.

“We delivered the Bug in partnership with UAVTEK, an SME that designs and builds UAVs from its workshop in the Cotswolds,” said James Gerard, principal technologist at BAE Systems’ Applied Intelligence business.

“Our experience in developing large volumes of secure hardware means we were able to help the team turn the excellent design into a real product which our armed forces can use. This kind of collaboration is happening right across BAE Systems and is a great way to quickly get the best thinking from small companies into the hands of military users.” 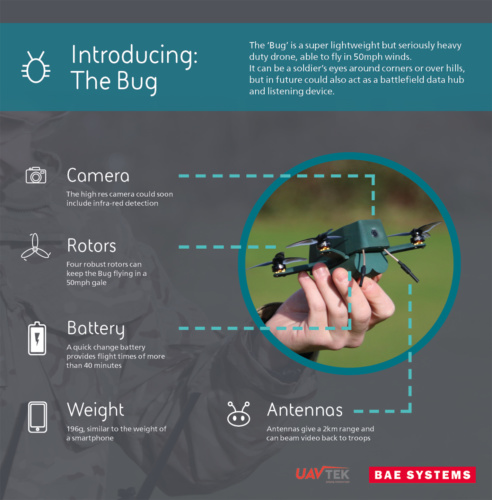 The Bug was the only nano-UAV able to cope with challenging weather during a recent Army Warfighting Experiment (AWE) event hosted by the Ministry of Defence’s Future Capability Group. Despite its diminutive size, the tiny drone was able to operate in winds of over 50mph, impressing attendees during the wargames scenario.

“In even the toughest weather, the Bug can deliver vital tactical intelligence on what’s around the corner or over the next hill, working autonomously to give troops a visual update,” said Gerard. “Combined with our other information advantage products, this video feed could be shared multi-domain, enabling commanders on land, sea and air to increase their situational awareness and inform their decisions.”