A lander thought to be lost on Mars since 2003 has been found on the surface of the planet.

The UK-led Beagle 2 Mars Lander has been found partially deployed and indications show that the Entry, Descent and Landing (EDL) sequence for the spacecraft worked, and it successfully touched down on Mars on Christmas Day 2003.

Beagle 2, which travelled to Mars on ESA’s Mars Express mission, was a collaboration between industry and academia with thte main aim of delivering world-class science from the surface of the Red Planet.

According to the UK Space Agency, images taken by the HiRISE camera on NASA’s Mars Reconnaissance Orbiter (MRO) and initially searched by Michael Croon of Trier, Germany, a former member of ESA’s Mars Express operations team at ESOC, have identified clear evidence for the lander and evidence for key entry and descent components on the surface of Mars within the expected landing area. 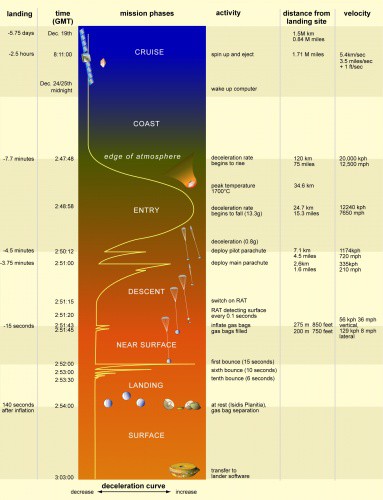 Since the loss of Beagle 2 following its landing on Christmas Day 2003, Croon has, in parallel with members of the Beagle 2 industrial and scientific teams, been screening images from HiRISE to look for signs of Beagle 2.

Subsequent re-imaging and analysis by the Beagle 2 team, HiRISE team and NASA’s Jet Propulsion Laboratory (JPL) has confirmed that the targets discovered, are of the correct size, shape, colour and dispersion to be Beagle 2.

The images, following analysis by members of the Beagle 2 team and NASA, show the Beagle 2 lander in what appears to be a partially deployed configuration, with what is thought to be the rear cover with its pilot/drogue chute and main parachute close by.

Several interpretations of the image of the lander have been identified and are consistent with the lander’s size and shape. The imaging data is however consistent with only a partial deployment following landing, thereby explaining why no signal or data was received from the lander as full deployment of all solar panels was needed to expose the RF antenna which would transmit data and receive commands from Earth.

In a statement, Dr David Parker, chief executive of the UK Space Agency, said: ‘The history of space exploration is marked by both success and failure.

‘This finding makes the case that Beagle 2 was more of a success than we previously knew and undoubtedly an important step in Europe’s continuing exploration of Mars.’

The Beagle 2 project was led by the late Prof Colin Pillinger from the Open University.

His widow, Dr Judith Pillinger said: ‘Colin was always fond of a football analogy.  No doubt he would have compared Beagle 2 landing on Mars, but being unable to communicate, to having ‘hit the crossbar’ rather than missing the goal completely.  Beagle 2 was born out of Colin’s quest for scientific knowledge.  Had he known the team came so close to scoring he would certainly have been campaigning to ‘tap in the rebound’ with Beagle 3 and continue experiments to answer questions about life on Mars.’

Others that provided major contributions to Beagle 2 were Prof George Fraser of Leicester University, and Prof David Barnes of Aberystwyth University who died in 2014.

See below for more on The Engineer’s coverage of the Beagle 2 project, including the recriminations that followed its failure to fully deploy.

Beagle 2 lander may have operated on Mars

Touchdown on Mars for Thales SuperCam