Fans of multi-player online games who are also interested in nature can now try out a new system developed by researchers at the University of California, Berkeley, and Texas A&M University.

Fans of multi-player online games who are also interested in nature can now try out a new system developed by researchers at the University of California, Berkeley, and Texas A&M University.

Craig Newmark, founder and customer service representative of craigslist, one of the most popular online communities in the country, is hosting the robotic video camera project from the back deck of his home, which overlooks Sutro Forest in San Francisco.

'This is a new kind of massive multi-player online game,' said Ken Goldberg, a UC Berkeley professor of engineering and co-principal investigator of the project. "Rather than aiming a gun at virtual enemies, players aim a camera at live wild birds."

The technology behind the game, called Collaborative Observatories for Natural Environments-Sutro Forest (CONE Sutro Forest), was conceived by Goldberg and Dezhen Song, assistant professor of computer science at Texas A&M.

With funding from the National Science Foundation, Goldberg, Song and their students have been working for several years on systems that allow 'collaborative control' of a camera's movements by multiple users over the Internet.

'CONE Sutro Forest uses a collaborative control interface that allows dozens of people to simultaneously share remote control of the pan-tilt-zoom video camera,' said Goldberg. 'It introduces highly responsive algorithms that automatically compute the optimal camera viewpoint to satisfy dozens of simultaneous players, including experts and amateurs. We've also included a new relay server to make the video stream faster and more responsive, a database of images and biological information about the wild birds likely to be spotted in the Sutro Forest, and a scoring system that rewards users who find and identify unusual birds.'

For instance, using a computer mouse, a registered user of the Web site may direct the camera to point at a jay and snap a photo. However, if a majority of other players direct the camera elsewhere, the system will favour the more popular choice. 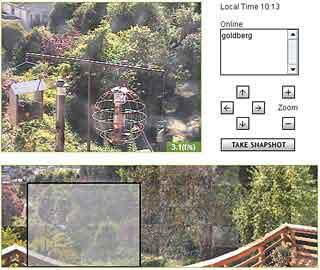 The web interface for CONE Sutro Forest, an online game that allows players to control the movements of a remote camera. Players earn points by snapping photos of birds and identifying them. The game is free and open to the public. (Image courtesy of Ken Goldberg, UC Berkeley)

Players can see who else is logged on and try to beat them to the best pictures. The system waits until the photo is classified consistently by at least two players, and assigns points according to how rare the bird is. Players with higher scores get more influence over where the video camera is positioned.

'We hope this project increases public awareness about how technology can help natural observation,' said Song. 'This also brings people with a specific knowledge together effectively and efficiently.'

'This is an interesting experiment in collaborative technology,' added Newmark. 'It's also fun to see an educational game based on what's happening outside my window.'

CONE Sutro Forest is free and open to the public at: http://cone.berkeley.edu.