Microvisk Technologies has recently secured £1.025m of funding to develop a new system to diagnose and monitor bleeding and blood clotting disorders.

Microvisk Technologies has recently secured £1.025m of funding to develop a new system to diagnose and monitor bleeding and blood clotting disorders.

A spin-out company of the Science and Technology Facilities Council (STFC), Microvisk's blood clotting measurement device is primarily aimed at patients who take anti-clotting drugs, such as Warfarin, also known as 'anti-coagulants'. For these patients, frequent blood testing is a necessity, which means that hundreds of thousands of tests are carried out every year in the UK alone.

Anti-coagulant drugs reduce the blood's ability to form clots. Although blood clotting is essential to prevent serious bleeding in the case of skin cuts, clots that occur inside blood vessels can block the flow of blood to major organs, causing heart attacks and strokes. However, because anti-coagulants reduce the blood’s ability to clot, they can increase the patient’s risk of severe external or internal bleeding or blood loss. It is therefore essential that the blood is accurately monitored so that the correct dosage of medication required can be calculated exactly.

Microvisk's system means that a doctor will be able to perform a blood coagulation test by measuring the viscosity, or thickness, of blood in a patient with laboratory-standard accuracy from his own surgery.

The heart of the system is a microscopic cantilever device, which bends when heated. The degree and the speed at which the cantilever bends is indicative of the thickness of the blood surrounding the device. The miniature devices are cheap to manufacture in large quantities and are therefore disposable.

A hand held instrument provides an immediate read-out of results from the device, which can then be downloaded directly onto a computer. 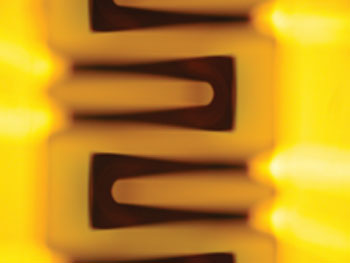 Unlike conventional sensors, measurements can be made with a very small blood sample, causing less pain and tissue damage to the patient.

Founded by CLIK, the wholly owned technology exploitation company of STFC, Microvisk's technology is based on STFC's extensive expertise in microstructures.

The £1.025m investment included contributions from Synergis Technologies, Midven Limited, The Rainbow Seed Fund and a number of private investors and venture capitalists.

Thread robot is designed to remove blood clots in brain