Sisters from Hampshire have invented the so-called ‘booty buster,’ an exercise device that works core muscles around the stomach while targeting cellulite in the bottom and thighs.

Sisters from Hampshire have invented the so-called ‘booty buster,’ an exercise device that works core muscles around the stomach while targeting cellulite in the bottom and thighs.

The device is shaped like a wok and has an unstable base which forces the user to work their stomach muscles to maintain balance. It contains fixed ball-like nodules which massage the bottom while the person is sitting on it.

Jenny Thorpe, 39, and Debbie Riseborough, 36, had their design prototypes tested by sports scientists at Portsmouth University and early results are said to be promising.

In order to monitor muscle activity, Dr Joanna Scurr,  from the university’s Department of Sport and Exercise Science, used a process called electromyography (EMG) which records electrical impulses that are produced every time a muscle is used. She attached small electrodes to the skin which picked up the electrical activity of the muscle underneath which were then monitored by a computer.

'The booty buster showed significantly more muscle activity than other devices on the market,' she said.

The booty buster works the upper and lower abdominal muscles and the obliques and stimulates blood flow to the bottom and thighs keeping the connective tissue elasticated which helps stop fat deposits.

Thorpe and Riseborough were able to develop their prototype after approaching the Portsmouth University for advice. 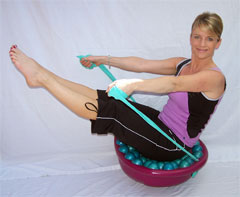 'The two women came to us with a great idea but, as is often the case, there was no clear way for them to take the idea further. The university supported their application for funding from Finance South East allowing us to help them develop their ideas into working prototypes with the creative input of an external design agency, Patents & Prototypes and the expertise of our sports science department,' said Martin Lloyd, business sector manager at the university.

Thorpe and Riseborough are now looking for more backing to take the product to market.