Duke University engineers have discovered that buckyballs hinder the ability of bacteria and other micro-organisms to accumulate on the membranes used to filter water in treatment plants.

They think that coating pipes and membranes with these nanoparticles may prove to be an effective strategy for addressing one of the major problems and costs of treating water.

'Just as plaque can build up inside arteries and reduce the flow of blood, bacteria and other micro-organisms can, over time, attach and accumulate on water-treatment membranes and along water pipes,' said So-Ryong Chae, post-doctoral fellow in Duke’s environmental and civil engineering department.

'As the bacteria build up on these surfaces, they attract other organic matter, creating a biofilm that slowly builds up over time,' Chae said. 'The results of our experiments in the laboratory indicate that buckyballs may be able to prevent this clogging, known as biofouling. The only other options to address biofouling are digging up the pipes and replacing the membranes, which can be expensive and inconvenient.'

A buckyball, or C60, is one shape within the family of tiny carbon shapes known as fullerenes. It consists of 60 carbon atoms arranged in a shape very much like a soccer ball.

'Biofouling is viewed as one of the biggest costs associated with membrane-based water-treatment systems,' said Claudia Gunsch, assistant professor of civil engineering at Duke’s Pratt School of Engineering. 'These membranes have very small pores, so they can get stopped up quickly. If we could increase the time between membrane replacements by 50 per cent, for example, that would be a huge cost saving.'

According to Chae, the addition of buckyballs to treatment membranes had a two-fold effect. First, treated membranes showed less bacterial attachment than non-treated membranes. After three days, the membranes treated with buckyballs had an average of 20 colony forming units, the method by which bacterial colonies are counted.

'In contrast, the number of bacterial colonies on the untreated membrane was too numerous to count,' Chae said.

Chae also found that the presence of the buckyballs inhibited respiration or the ability of the bacteria to use oxygen to fuel its activities.

'As the concentration of buckyballs increased, so did the inhibition of respiration,' Chae said. 'This respiratory inhibition and anti-attachment suggests that this nanoparticle may be useful as an anti-fouling agent to prevent the biofouling of membranes or other surfaces.'

Gunsch said that the mechanisms involved are not well understood.

Both Gunsch and Chae believe that, since buckyballs are one of the most widely used nanoparticles, additional research is needed to determine if they have any detrimental effects on the environment or to humans. This is one of many issues being studied at Duke’s Center for Environmental Implications of Nanotechnology.

'We need to figure out how resistant these coatings will be to long-term use,' Gunsch said. 'If they can indeed prevent fouling, they will last longer. If they slough off over time, we need to know what the effects will be.'

The current experiments in the laboratory were conducted with Escherichia coli K12, a strain of bacteria that is widely used in laboratory experiments.

'We focused on quite a specific micro-organism, so the next stage of our research will be to see if these nanoparticles will have the same effects on bacteria commonly found in the environment or those in mixed microbial communities,' Chae said. 'We also plan to build a small-scale version of a treatment plant in the lab to conduct these tests.' 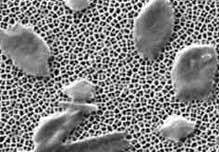 Filter material above shows growth of bacterial colonies that impede flow. Filter below, with Carbon-60 added, has no colonies