US researchers have developed a means to remove five times more heat than any other experimental method developed for cooling integrated circuits.

Researchers at Purdue University have developed a means to remove five times more heat than any other experimental method currently developed for cooling integrated circuits.

But the new so-called 'microjet technology' developed at Purdue is capable of cooling chips that produce more than 1000W of heat per square centimetre, according to Issam Mudawar, a professor of mechanical engineering who is leading the researchers.

Here's how the technique works: first, a hydroflurocarbon coolant is forced through a metal plate containing tiny holes. The liquid then flows along channels formed on top of a chip. As the liquid inside the channels is heated by the hot chip, it bubbles and momentarily becomes a vapour, cooling the device. The coolant then collects at both ends of the channels and is circulated back through the system.

Microchannels have been used as a means to cool chips before, but in previous designs, the temperature of the coolant varied depending on its location as it moved through the channel.

'That's because the coolant flowed from one end of the channel to the other, heating up along the way,' Prof Mudawar said. ‘The microjets allow you to cool uniformly because you are supplying the liquid in the form of jets everywhere along the length of each channel.'

'Usually, with hydrofluorocarbons, you are barely able to cool at a rate of 200W per square centimetre, but this hybrid design boosted the performance dramatically,' said Mudawar.

The research, funded by the US Office of Naval Research, could lead to a new chip-cooling technology for applications such as advanced radar and propulsion systems and lasers. The approach also might have commercial applications in personal computers, Mudawar said. 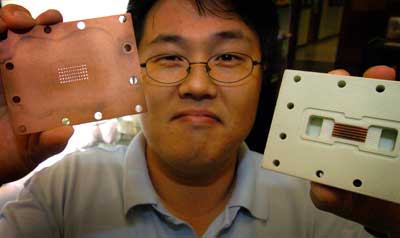