Michael Chen has won this year’s James Dyson Award after developing a product that could help save cyclists’ lives .

Former Middlesex University student Michael Chen has won this year’s James Dyson Award after developing a product that could help save the lives of those who cycle.

Chen was inspired to develop his so-called Reactiv cycling jacket after taking a close look at the accelerometer technology used in the Nintendo Wii remote, which measures movement and tilt to complement its pointer functionality.

The jacket also has amber LEDs in the arms which are activated by a tilt switch behind the elbow. These light up when the arm is lifted, indicating the cyclist is about to turn either right or left. 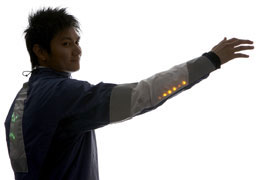 Chen said that Reactiv allows a cyclist to easily communicate their intentions to other travellers and could hopefully reduce the 20,000 incidents involving cyclists in London alone each year.