Engineers have developed an electrically conductive hydrogel that could give people with paralysis greater control over electronic equipment, or give voice to those with speech difficulties.

Developed by researchers at KAUST (King Abdullah University of Science and Technology) in Saudi Arabia, the material is claimed to take stretchability, self-healing and strain sensitivity to new limits.

The research is published in Science Advances.

Smart materials that flex, sense and stretch like human skin could have many applications including biodegradable patches that help wounds heal to wearable electronics and touch-sensitive robotic devices.

The material - a composite of hydrogel and MXene metal-carbide – can stretch by more than 3400 per cent and quickly return to its original form. It also adheres to a number of surfaces, including skin. When cut into pieces, it can quickly mend itself upon reattachment.

"The material's differing sensitivity to stretching and compression is a breakthrough discovery that adds a new dimension to the sensing capability of hydrogels," said first author, Yizhou Zhang, a postdoc in Alshareef's lab.

According to KAUST, this new dimension may be crucial in applications that sense changes in the skin and convert them into electronic signals. The team has found that a thin slab of the material attached to a user's forehead can distinguish between different facial expressions, such as a smile or a frown. This ability could allow patients with extreme paralysis to control electronic equipment and communicate.

In a similarly assistive application, strips of the material attached to the throat can convert speech into electronic signals.

"There is real potential for our material in various biosensing and biomedical applications," said co-author Kanghyuck Lee. 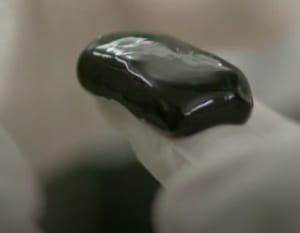 Further medical applications include flexible wound coverings that can release drugs to promote healing. These could be applied internally, on diseased organs, in addition to adhering externally to skin. The team also envisions developing a smart material that could monitor the volume and shape of an organ and vary drug release according to signals produced.

In robotics applications, the material could be used in touch-sensitive finger-like extensions for machinery.

"There is great potential for commercialisation," said Alshareef.