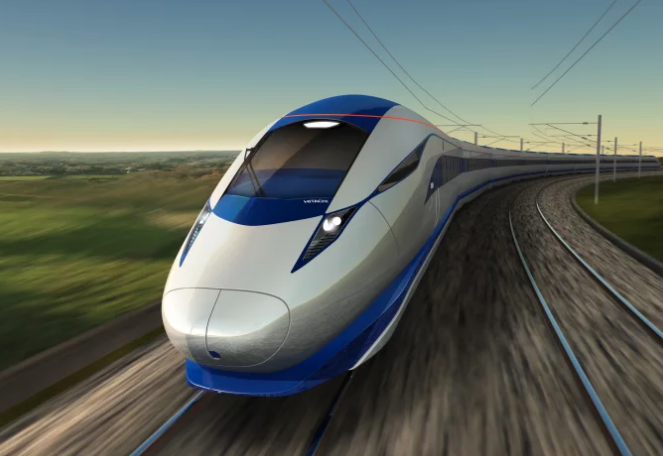 According to the firm, Alstom; Bombardier Transportation; Hitachi Rail Europe; Patentes Talgo S.L.U and Siemens will all be invited to tender for a £2.75bn contract to design build and maintain at least 54 trains for the new network.

Of the five companies in the running for the lucrative contract, four already have a significant manufacturing presence in the UK. Hitachi is currently building the next generation of intercity express trains at its plant in Newton Aycliffe, whilst Bombardier is producing the rolling stock for Crossrail from its historic facility in Derby.  Meanwhile, Siemens and Alstom - which recently announced plans to merge their European rail businesses - both have large maintenance facilities in the UK.  Spanish manufacturer Talgo is currently the odd one out but is reportedly scouting locations for a full train manufacturing plant close to Leeds or Liverpool.

The first trains are expected to roll off the production line in the early 2020s, and are currently slated to enter service in 2026.   Phase 1 of the network will link London with Birmingham, Leeds and Manchester in a “Y” configuration, whilst in the longer-term the trains will serve destinations including York, Liverpool, Glasgow and Edinburgh.

Welcoming the shortlist, HS2 minister Paul Maynard said that the investment is expected to create hundreds of jobs and boost Britain’s skills and expertise in the high-speed rail sector. HS2 Ltd Managing Director Chris Rayner added: “It’s great to see such a strong line up of experienced high-tech manufacturing and design talent. Together with the successful bidder, HS2 will deliver some of the world’s most advanced rolling stock, engineered to provide seamless, accessible, fast and reliable journeys."

All five bidders will be invited to tender in spring 2018, with contracts awarded in 2019. The successful bidder will also maintain the fleet from the dedicated rolling stock depot planned for Washwood Heath in Birmingham. The area will also be home to the HS2 Network Control Centre, which will together create hundreds of skilled jobs.