Hydrogen production given an edge by molybdenum sulphide

Researchers have found that molybdenum sulphide (MoS2) could be a more productive as a catalyst for hydrogen production than previously thought. 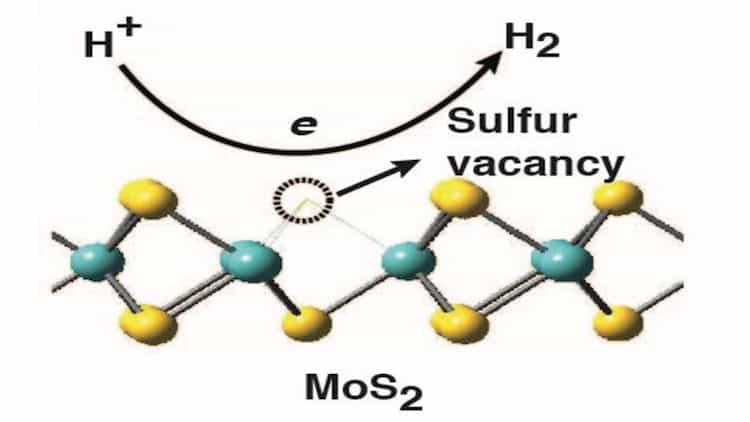 The researchers from North Carolina State University, Duke University, NC and Brookhaven National Laboratory, NY found that the entire surface of MoS2 can be used as a catalyst, not just the edges of the material.

“The key finding here is that the intrinsic catalytic performance of MoS2 is much better than the research community thought,” said Linyou Cao, an associate professor of materials science and engineering at NC State and senior author of a paper describing the work. “We’re optimistic that this can be a step toward making hydrogen a larger part of our energy portfolio.”

Hydrogen can be produced from water in a process called hydrogen evolution, which involves the use of an expensive platinum catalyst. Another candidate for a hydrogen evolution catalyst is MoS2, which is inexpensive and abundant but long thought of limited utility because it was believed that the edges of MoS2 act as catalysts, leaving the bulk of the material inactive.

The new findings are said to show that the surface of MoS2 can be engineered to maximise the catalytic efficiency of the material and the key to this efficiency is the number of sulphur vacancies in the MoS2.

“We found that these sulphur vacancies attract the hydrogen atoms in water at just the right strength: the attraction is strong enough pull the hydrogen out of the water molecule, but is then weak enough to let the hydrogen go,” Cao said in a statement.

The researchers also found that the grain boundaries of MoS2, which have been thought by the research community to be catalytically active for hydrogen evolution, may only provide trivial activity.

The findings point to a new direction for improving the catalytic performance of MoS2 .  Currently, the most common way is to increase the number of edge sites, because of the conventional wisdom that only the edge sites are catalytically active.

The researchers have also found that there is a “sweet spot” for maximising the catalytic efficiency of MoS2 .

“We get the best results when between 7 and 10 per cent of the sulphur sites in MoS2 are vacant,” Cao said. “If you go higher or lower than that range, catalytic efficiency drops off significantly.”

“In order to get the best output from sulphur vacancies, the crystalline quality of MoS2 needs to be very high,” said Guoqing Li, a Ph.D. student at NC State and lead author of the paper. “The ideal scenario would be 7 to 10 per cent sulphur vacancies uniformly distributed in a single crystalline MoS2 film.”

The work was done using MoS2 thin films that are three atoms thick. Using these engineered thin films, the researchers were able to achieve catalytic efficiency comparable to previous MoS2 technologies that relied on having two or three orders of magnitude more surface area.

“We now know that MoS2 is a more promising catalyst than we anticipated, and are fine-tuning additional techniques to further improve its efficiency,” Cao said. “Hopefully, this moves us closer to making a low-cost catalyst that is at least as good as platinum.”

The paper, “All the Catalytic Active Sites of MoS2 for Hydrogen Evolution,” is published in the Journal of the American Chemical Society.