Engineering researchers from Harvard University have demonstrated a laser with a wide-range of potential applications in chemistry, biology and medicine.

Called a quantum cascade (QC) laser nanoantenna, the device is capable of resolving the chemical composition of samples, such as the interior of a cell, with unprecedented detail.

The device consists of an optical antenna fabricated on the facet of a quantum cascade laser that emits infrared light with a wavelength of 7 microns.

The optical antenna consists of two gold rectangles, each 1.2 microns long, separated by a narrow gap of 100nm. Light from the laser illuminates the antenna, resulting in an intense spot of light in the gap seventy times smaller than the wavelength - far smaller than what would be possible by forming a spot of light using a lens.

Because the nanoantenna creates a light spot of nanometric size about fifty to hundred times smaller than the laser wavelength, the light spot can be scanned across a specimen to provide chemical images of the surface with superior spatial resolution. 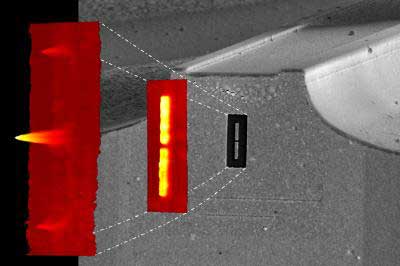 'There’s currently a major push to develop powerful tabletop microscopes with spatial resolution much smaller than the wavelength that can provide images of materials, and in particular biological specimens, with chemical information on a nanometric scale,' said Federico Capasso, the Robert L. Wallace Professor of Applied Physics at Harvard.

While infrared microscopes are commercially available and widely used to map the chemical composition of materials, their spatial resolution is limited by the range of available light sources and optics to well above the wavelength. Likewise, the so-called near field infrared microscopes, which rely on an ultra sharp metallic tip scanned across the sample surface at nanometric distances, can provide ultrahigh spatial resolution but applications are so far strongly limited by the use of bulky lasers with very limited tunability and wavelength coverage.

'We have created for the first time an extremely compact device that will enable the realisation of new ultra-high spatial resolution microscopes for chemical imaging on a nanometric scale of a wide range of materials and biological specimens,' added Capasso.

Quantum cascade (QC) lasers were invented and first demonstrated by Capasso and his group at Bell Labs in 1994.