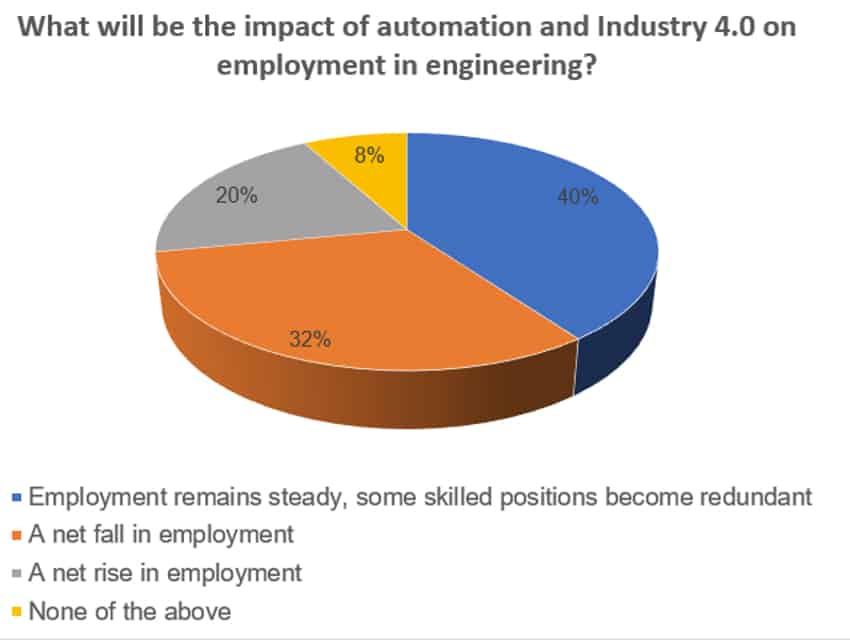 The Engineer’s Industry 4.0 week focussed on the opportunities that IoT will bring, but the downside to this upsurge in automation is its effect on the jobs market.

This hasn’t gone unnoticed at the Office of National Statistics, which looked at the jobs of 20 million people and concluded that that 7.4 per cent were at high risk of being replaced by automation.

As reported last week, the  ONS has also produced a “bot” to predict which jobs are most at risk, and says that overall, women, young people and those who work part-time are most likely to be at risk from automation.

Waiters, shelf-stackers, bar staff, plus kitchen and catering assistants are some of the jobs most likely to be lost to automation, so not much of a threat to the engineering profession.

But what will the overall trend be outside of these occupations? Will automation reduce employment levels in engineering or increase the number of people employed by the sector? Will employment levels remain static with some skilled positions becoming redundant? Last week’s poll results show that 40 per cent of respondents favour the latter view, followed by 32 per cent who foresee a net fall in employment. A fifth (20 per cent) of the poll believes automation will lead to a net rise in employment, and eight per cent opted for ‘none of the above’.

In the comments that followed, Another Steve said: “This is a bigger question than just the impact on Engineering. Increased automation will impact all parts of society and we need to determine what is more important: full (meaningful) employment or more people on zero hours contracts and benefits and more profits into the private sector. The myth of more leisure time is just that, a fantasy. Since the ‘new jobs’ don’t exist, and a lot of people are not capable of undertaking intellectually demanding work, what are people supposed to do? Are they just put on the garbage heap?

Looking back to the mechanisation of agriculture, Ian Downie said: “In Victorian times the majority of people worked on farms. They were scared that farm machinery would put them all out of work. Well it did. There are very few farm workers now, but workers are better off. There are other jobs and the increased wealth it generated got rid of the Dickensian squalor of the nineteenth century. The challenge is managing the transition.”

Finally, John Ettridge said: “The obvious answer is to reduce the working week to 4 days but receive the same pay rate as 48 hours. The cost of employment is already factored into the price of the goods or end result. Automation will replace some or many workers from existing jobs that will simply disappear, but like in the past industrial revolution, automation will be a good thing and replace repetitious and dangerous jobs, while freeing people to work less hours, not 6 days a week. The extra free time creates new jobs in the holiday, entertainment and service industries.”

Your comments are still welcome on this subject, but we do ask that readers familiarise themselves with our guidelines for content of comments before submitting, and remind all contributors that comments are moderated.