Lightweight ceramic body armour is put to the test

The UK Ministry of Defence (MoD) is ballistically testing a new ceramic body armour plating that is 15&ndash;30 per cent lighter than current designs and can be made more energy-efficiently.

The plates are required by front-line troops and specialist police divisions, and are inserted into base kevlar layers with the intention of stopping high-speed rounds from armour-piercing rifles.

Dr Hywel Jones, of Sheffield Hallam University’s Materials and Engineering Research Institute, and Dr Anthony Pick, who heads a ceramic consultancy in Barnsley, have attracted £25,000 to commercialise their designs. 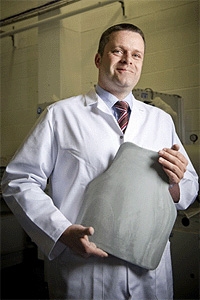 ‘The soldier is burdened quite heavily in the field,’ said Jones. ‘Body armour itself is about 14kg just with the base and they’re always getting new kit, which actually means new weight — so if we cut down weight in other areas, then we can give them better or more kit that helps them survive and operate better in the field.’

‘What we’ve done is develop a composite based around silicon carbide, but [we’ve been] playing some clever games with the composition and we’ve added some other ceramic material in there as well. We came out with a plate that has a density of 2.75–2.8 [g/cm3], which is around about 30 per cent lighter than alumina and 15 per cent lighter than silicon carbide, depending on the precise composition,’ Jones added.

Pick and Jones have just made a batch of 30 plates (for the purposes of data consistency) that are currently being tested by the MoD. The focus is not only on stopping ability, but also on preventing something called behind-armour blunt trauma (BABT), which describes serious injuries that can occur even when the bullet is completely stopped.

Although Jones said they are given little information about how their material is being tested, he said the MoD have a unique rig, believed to be the only one in the world able to specifically and objectively test BABT.

‘The ceramic is mostly destroyed in the region that’s hit. People think the bullet just hits and bounces off — but most armour-piercing rounds will actually shatter the ceramic and a lot of the energy is absorbed in that impact,’ Jones said.

The team are aiming to achieve the internationally recognised standard of NIJ-Type-IV, which requires the armour to contain a 10.8g armour-piercing bullet at a velocity of 878m/s.

Another advantage of the new material is that it can be fired in a furnace at around 1,500–1,700ºC, compared with greater than 2,000ºC for existing ceramics — resulting in significant energy savings, due to the large increments in energy needed to increase temperature at these ranges.

Currently the team has to send their material off to two separate furnaces for firing and with the new grant they hope to build an in-house facility. The work has been supported by the MoD and a £25,000 fund from the Worshipful Company of Armourers and Brasiers.

High-altitude autonomous refuelling is put to the test