An international research team has found a way to switch a material’s magnetic properties from hard to soft and back again.

An international research team, led by scientists at the London Centre for Nanotechnology (LCN) and the University of Chicago, has found a way to switch a material’s magnetic properties from ‘hard’ to ‘soft’ and back again – something which could pave the way to new control of electromagnetic devices.

The researchers tuned a magnet by subjecting it to a second magnetic field, perpendicular to the original.

'Whether a magnet is hard or soft determines what you can use it for. Typically, you would use a permanent magnet to fix a note to the door of your refrigerator because you want it to stay there for a long time. On the other hand, you might use a soft magnet in a motor or transformer because it would be better at adapting to the rapid changes in alternating current and would dissipate much less energy than a hard magnet,' he said.

'It is very rare to be able to continuously tune wall pinning in a magnet but we have now shown how it can be done in a model magnet at a low temperature. In the process, we have shown how chemical disorder at the nanometre scale can have a huge effect on the properties of a macroscopic magnet .'

Most physical and biological systems can be thought of as disordered. Semiconductors rely on randomly placed impurities for their electrical properties and uses, while the chemical and structural impurities in magnets determine the domain wall pinning and therefore how easily their polarity can be changed.

'From a theoretical point of view, it’s been really interesting for us to see the properties of a large, disordered system being dominated to such an extent by a rare configuration of impurities,' said Prof Aeppli. 'Unlike biological systems, in materials science we are used to seeing behaviour which is dominated by the average characteristics of the system. Here we can observe the massive influence of a miniscule number of chemical and structural defects.'

Work at the London Centre for Nanotechnology was funded by the UK Engineering and Physical Sciences Research Council and a Wolfson-Royal Society Research Merit Award. Research  carried out at the University of Chicago was supported by the US Department of Energy and National Science Foundation. 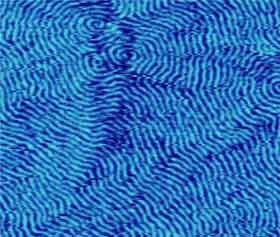 Domain wall pattern for a ferromagnet. The technical use of the magnet is determined by the ease with which the walls can be moved, or equivalently, by the force with which they are pinned. Strong pinning gives a hard magnet, soft pinning a soft magnet. The distance between the walls is 100 nanometres or 10 millionths of a centimetre.