A chemist at the National Institute of Standards and Technology has developed a simple method for detecting and measuring small quantities of explosives.

A chemist at the National Institute of Standards and Technology (NIST) has developed a simple method for detecting and measuring small quantities of explosives that is claimed to be more sensitive than conventional techniques.

NIST researcher Tom Bruno enhanced a technique called 'headspace analysis', which is used to detect and analyse trace levels of chemical compounds from solids or liquids that are released into the atmosphere.

Bruno’s enhancements improved the efficiency of sample collection, for the first time making the technique suitable for detecting low concentrations of polar, low-volatility compounds such as explosives.

Preliminary results indicate the method is sensitive enough to measure amounts of target materials that constitute as little as 0.0000002 per cent of a sample.

The sample collection device consists of several coils of fine tubing, just 0.32mm in inner diameter, whose inner coating has been modified to efficiently attract and retain chemicals across its large surface area.

The device can be used with a sample-heating oven as part of a laboratory analysis system or taken into the field for sample collection.

To extract target molecules from a sample, the coil is placed inside an insulated cylinder and chilled with a cold air stream to -40C. A gas, such as helium, is then swept across the sample held in the oven or the coil device, gathering up target molecules along the way, and through the fine tubing.

Chilling the coils - part of Bruno’s innovation - makes collection of target molecules more efficient. The tubing is then washed with a solvent, or heated, to release the captured molecules for analysis.

Bruno found that the mass of the collected molecules increases with rising oven and sweep-gas temperatures, offering a way to detect specific target molecules under particular field conditions.

Among other applications, the researchers have used the method to improve sampling and analysis of fire retardants in a car interior, a topic of interest because of concerns expressed by some that the 'new car smell' may be a health hazard.

They also are using the method to detect volatile protein decomposition products in spoiled meats. Environmental applications could also include detection of pesticides on soil. 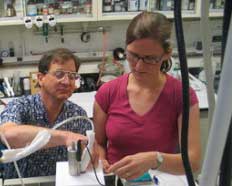 Device detects explosives on the shoes of airline passengers