Scientists have developed a way to grow stem cells and other tissue in the laboratory in conditions similar to the way they grow in the human body.

The technology, developed and patented by scientists at Durham University and its spin-out company ReInnervate, is a plastic scaffold which allows cells to be grown in a more realistic three-dimensional (3D) form compared to the traditional flat surface of a Petri dish.

Evidence gathered by the research team shows that the technology is  an inexpensive, straightforward way of cultivating cells in 3D. Using it could lead to more successful drug development programmes and a reduction in unnecessary tests on animals.

A large proportion of drugs fail at the testing stage, costing industry millions of pounds in research and development costs and failed drugs trials every year. At the moment, most drugs in development are first tested on cells grown in two-dimensions (2D) in standard laboratory equipment such as Petri dishes or flasks but cells in the human body form tissues and grow in more complex, three-dimensional ways.

The new study tested the toxic effect of a cancer drug called Methotrexate (MTX) on liver cells grown in three and two dimensions. Liver cells are frequently used in the drug development industry to test the toxicity of drugs and MTX is known to cause liver damage at high doses.

Tests showed that the structure and properties of the cells grown using the 3D scaffold were most similar to liver cells found in the human body, compared with the 2D cells which appeared ’disorganised’ when viewed under the microscope.

When subject to doses of MTX, cells grown in 2D died at very low concentrations, whereas 3D cells grown using the scaffold were far more robust and more accurately reflected the behaviour of cells in the human body when subjected to similar doses of the drug.

Dr Stefan Przyborski, a senior researcher with Durham University and chief scientific officer of ReInnervate, has tested ten different tissue types on the scaffold, including bone, liver, fat and stem cells from bone marrow, and is marketing the product for commercial use.

The scaffold is made of highly porous polystyrene, is about the size of a ten pence piece (or a quarter) and resembles a thin white disc. It has a structure resembling that of a sponge and is riddled with tiny holes which scientists are able to populate with cells which are then cultivated under laboratory conditions.

The technology has potential to be used to grow human stem cells for drug development. Another current use of the scaffold involves growing skin cells which are being used by the cosmetics industry to test cosmetics. 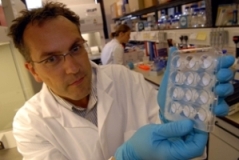 ’Our results suggest that testing drugs on liver cells using our 3D culture system may be more likely to reflect true physiological responses to toxic substances. Because the 3D cells are cultivated under more realistic conditions, it means that they function more like real tissues,’ said Dr Przyborski.

’Scientists are therefore able to gain a more accurate idea of how a drug will behave in the human body, knowledge which can contribute to  improving the efficiency of drug discovery, reducing drug development costs, and may help reduce the number of animals in research,’ he added.

’Our technology is essentially a well engineered piece of plastic that provides a suitable environment for cells to grow more naturally in a 3D configuration. Our product is available off-the-shelf, it is easy to use in routine applications, it is highly adaptable to different tests, it is inert and it is cheap and easy to produce and manufacture.’