Poll results: Should private electric scooters be legalised for road use?

In our last poll, The Engineer asked readers whether privately owned e-scooters should be legalised for road use.

Opinion on the matter was fairly divided, but the majority (55.38 per cent) disagreed with the government’s potential considerations to allow private electric scooters on our roads. 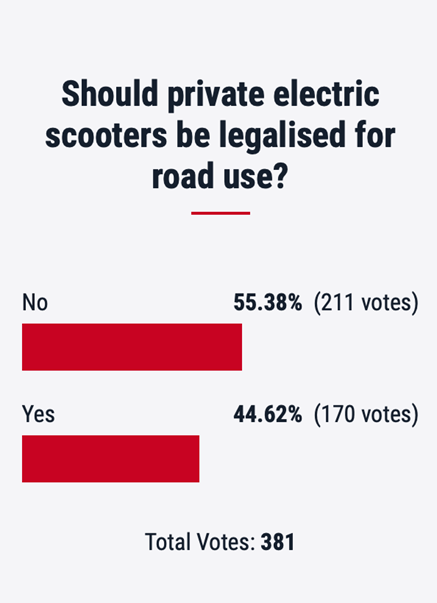 The obvious concern is around safety — as reported previously, figures published by Major Trauma Group showed that NHS Ambulance Trusts across England, Wales and Northern Ireland were called to assist 82 per cent more e-scooter related accidents during 2021 than throughout 2020.

Discussion among readers in the comments section (which can be found in the original poll article here) showed that many consider the scooters too dangerous unless subjected to the same legal requirements as other road vehicles, with voters arguing for further regulation and updated infrastructure to support the rapidly growing mode of transport.

Scooter supporters, however, were enthusiastic about the benefits of their use including energy efficiency and convenience. Most agreed that further work needs to be done to integrate them into the current transport framework, and readers suggested that measures such as speed limits, enforced helmet and safety gear laws, and identifying registration numbers would significantly improve safety.

A number of commenters also argued that improvements to responsible rider behaviour could be seen with increased private ownership, with riders less likely to park up in inconvenient places and more concerned about potential fines or confiscation for inappropriate use if the scooter is privately owned, rather than hired through a scheme.

As always, further discussion on the matter is welcomed below. All comments are moderated.

Poll: Should private electric scooters be legalised for road use?