A new polymer membrane developed at Hanyang University in Korea is highly effective in separating carbon dioxide from natural gas.

A new polymer membrane which started life in Korea is claimed to be four times more effective than conventional membranes at separating carbon dioxide from methane.

The membrane works by allowing carbon dioxide or other small molecules to go through hour-glass shaped pores within it, whilst impeding natural gas, or methane, movement through the same pores.

Dr Ho Bum Park, a postdoctoral student in the laboratory of Prof Benny Freeman at the University of Texas at Austin, also found that the polymer membrane acts quickly too. It permits carbon dioxide to move through it a few hundred times faster than conventional membranes do – even as it prohibits natural gas and most other substances from travelling through its pores for separation purposes.

'If this material was used instead of conventional cellulose acetate membranes, processing plants would require 500 times less space to process natural gas for use because of the membranes’ more efficient separation capabilities, and would lose less natural gas in their waste products,’ said Freeman, noting that, pound for pound, natural gas has a worse global warming impact on the atmosphere than carbon dioxide.

Dr Park initially engineered the polymer membrane while at Hanyang University in Korea. As a research assistant in the lab of Prof Young Moo Lee, he investigated whether polymers could work well at separating carbon dioxide out of gas wastes produced by power plants. Separating the greenhouse gas from other gases at power plants must occur at high temperatures, which usually destroy plastic membranes.

Lee and Park not only found that their new polymer could handle temperatures above 600°F, but that the heat actually improved the material's performance.

'I didn’t expect that the polymer would work better than any other plastic membranes because thermally stable plastics usually have very low gas transport rates through them,' Park said. ‘Everyone had thought the performance barrier for plastic membranes could not be surpassed.'

When Park joined Freeman’s laboratory in Austin, he verified that the polymer could separate carbon dioxide and natural gas. Natural gas that is transported in pipelines can only contain two per cent carbon dioxide, yet often comes out of the ground with higher levels of the gas, requiring this separation step.

'This membrane has enormous potential to transform natural gas processing plants,' Prof Freeman said, 'including offshore platforms, which are especially short on space.' 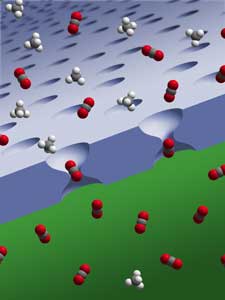 To better understand how the polymer works, Dr Anita Hill and her group at Australia’s national science agency analysed the material using positron annihilation lifetime spectroscopy. The method used at the Commonwealth Scientific and Industrial Research Organization suggested that the effect was due to the hour-glass shape of the pores within the plastic, which are much more consistent in size than in most plastics.

The pores appear and disappear depending on how often the chains of chemicals that make up the plastic move. ‘The plastic chains move, and as they do, they open up gaps that allow certain gas molecules to wiggle through the plastic,'  Prof Freeman said.

Freeman and Park intend to learn more about how these mobile pores behave as they develop the polymer for commercial purposes.