A surgical team at Guy’s and ’ NHS Foundation Trust Hospital in has performed the ’s first live kidney transplant operation using a robot.

The robotic operation was performed by a team including surgeons Prokar Dasgupta and Nizam Mamode from Guy’s and ’ and Raja Kandaswamy from the .

The da Vinci robot is one of only two in the . During the operation, it is directed by a surgeon at a special console to carry out minute movements inside the body through three tiny keyhole incisions.

The robot’s small wristed instruments can move in all directions to allow surgeons to perform highly complex procedures. It also has a three dimensional camera which is placed inside the patient’s abdomen, allowing surgeons to see exactly what the instruments are doing. 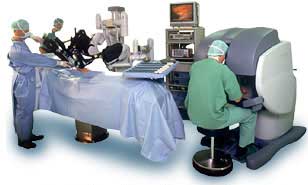 Mr Prokar Dasgupta, the consultant who leads on robotics at Guy’s and ’, says: “The first live robotic kidney transplant went really well and we are keen to do more. At such an early stage it is difficult to say what the long-term advantages of robotic transplants might be, but we are hopeful that the advantages will match the ones patients having other robotic operations have experienced.

“For example in robotic bladder and prostate operations we are finding that the increased flexibility and visibility the robot allows helps make the operation more precise and we can do more complicated surgery through the tiny keyhole incisions. So far, most of these patients have had much smaller scars and leave hospital earlier, getting back to normal daily activities more quickly.”

Robot surgery on the fly